Contains minor spoilers for the fifth-season finale of Downton Abbey

Now that the fifth season of Downton Abbey has concluded for U.S. viewers, fans have begun the annual months-long wait for new news from Lord Grantham and friends.

It’s a wait that tends to be a long one in the real world as well as for the fictional characters: the show, which typically airs in the fall in the U.K. and then in the U.S. at the beginning of the following year, has frequently used the gap between seasons to jump forward in time, which is how the show has covered a dozen years in five seasons.

This past season concludes on Christmas Eve, 1924 — and we know that the show will not take us beyond the ’30s, no matter how far ahead it jumps — so it’s a safe bet that the Crawley family will likely find themselves picking up the plot sometime in the 1925–1927 range. It’s also a safe bet that the show, which has relied on history as a framing device ever since the sinking of the Titanic set the whole story in motion, will play with some of the biggest moments of that era.

So, though little information is known so far about what Season 6 holds for Downton, here are a few guesses as to what next season may hold in store:

1. Even though the rise of Naziism in Germany—and the related death of Michael Gregson—was felt by Edith during the 1924-set season, the years that follow would see much more Hitler, as he was no longer in prison. In July of 1925, his book Mein Kampf was released.

2. Though it’s unlikely to hit the Grantham estate too closely, it would be difficult for the show not to address trouble with the coal industry. Low wages and high unemployment had long led to dissatisfaction among miners; in 1926, that distress was the impetus for a general strike among workers from a wide range of industries. Transportation and the press were among the services affected.

3. It’s extremely unlikely that a television will be installed at Downton Abbey—Lord Grantham is only just getting used to a wireless, after all—but news may trickle down of the birth of a new entertainment medium, especially as it will have been a fairly local innovation. “In London, a concern called Television Ltd. obtained licenses to retail the “televisor,” a radio device invented by John L. Baird of Glasgow that permits “looking in as well as listening in,” TIME reported in 1926. “Broadcasting from a televisor station in London was to begin at once.”

4. If Edith keeps working at her magazine, she’ll likely have cause to report on the 1926 feat of Gertrude Ederle, who became the first woman to swim the English Channel, during a period of what TIME dubbed “feverish eagerness” to attempt the crossing.

5. As babies Sybie, George and Marigold grow, they might read from a first edition of A.A. Milne’s Winnie-the-Pooh, which was published in 1926.

6. Add this to the list of ways that characters might be killed off: the influenza epidemic of 1926–27. Though not as famous as the Spanish flu outbreak of 1918, the disease was severe enough that TIME noted that it was “increasing throughout western Europe at so alarming a rate that public health officials have come to fear a pandemic, a world-wide occurrence of this disease” and that “Switzerland, Germany England and France have been severely hit.”

7. With Rose, Atticus, Tom and Sybie all looking forward to futures across the pond, here’s some very good news for their prospects as guest stars: as of 1927, it was getting easier than ever to communicate and travel between the U.K. and the U.S. January of that year saw the success of the first transatlantic telephone call, between the president of the American Telephone & Telegraph Co. and the secretary of the General Postoffice of Great Britain. It wasn’t exactly cheap—$25 a minute, according to TIME’s report—but it was more accessible than the year’s other big transatlantic feat: the flight of Charles Lindbergh, who went to London after his famous landing in France. “[The crowds] broke down police barriers, swarmed on the landing-field as soon as his plane was sighted. He swooped down looking for barren ground, saw none, returned skyward,” TIME reported of his arrival in England. “On the second attempt, his plane touched ground, but was forced to rise again because hero-worshipers insisted on dogging his path. His third attempt was rewarded with a clear field. Before he could climb out of his plane, the sea of the mob surrounded him-bowling over women, leaving the official reception committee stranded in the distance.”

No matter which of these events actually makes it onto the show, one thing is certain: Mr. Carson and Lord Grantham will say something about how the world is changing, and they’ll be right. 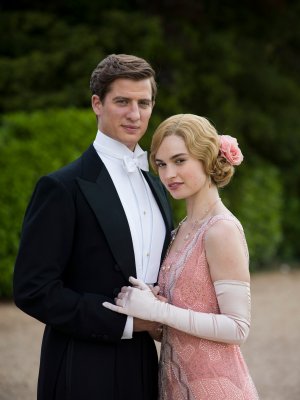