President Barack Obama’s top national security aide on Tuesday lambasted Israeli Prime Minister Benjamin Netanyahu’s plan to address Congress as “destructive [to] the fabric of the relationship” between the two countries, as political fallout continued to mount ahead of Netanyahu’s controversial visit.

National Security Adviser Susan Rice, delivering the Obama Administration’s strongest critique of the visit to date while speaking Tuesday night on PBS, said Netanyahu’s address next week has “injected a degree of partisanship, which is not only unfortunate, I think it’s destructive [to] the fabric of the relationship.”

Netanyahu’s visit has been sharply criticized in both Israel and the U.S. as overly political, coming just weeks before Israeli elections and after House Speaker John Boehner invited him without informing Obama or congressional Democrats. Obama will not meet with Netanyahu while he’s in town, and many Democrats, including Vice President Joe Biden, have signaled that they won’t attend his address to a joint session of Congress.

The Israeli leader has steadfastly defended the speech as an opportunity to voice his concerns over a potential nuclear deal between the U.S. and Iran, and did so again Tuesday, saying he was coming to the U.S. to “do everything I can” to stop a deal with Iran, the New York Times reports.

Still, the trip risked coming off as more partisan when Netanyahu turned down an invitation to address Senate Democrats.

“Thought I greatly appreciate your kind invitation to meet with Democratic Senators, I believe that doing so at this time would compound the misperception of partisanship regarding my upcoming visit,” Netanyahu said in a letter released by the office of Illinois Democratic Sen. Dick Durbin.

“We offered the prime minister an opportunity to balance the politically divisive invitation from Speaker Boehner with a private meeting with Democrats who are committed to keeping the bipartisan support of Israel strong,” he said in a statement. “His refusal to meet is disappointing to those of us who have stood by Israel for decades.” 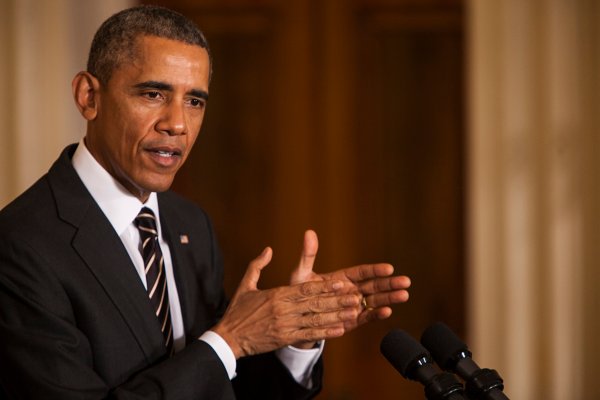 The Five Words That Democrats Don't Like in Obama's War Powers Request
Next Up: Editor's Pick