White House Takes The Gloves Off in Education Fight

President Barack Obama looks on during a meeting with the Amir of Qatar, in the Oval Office of the White House in Washington on Feb. 24, 2015.
Olivier Douliery—Pool/Corbis
By Haley Sweetland Edwards

After years of bipartisan language urging Congress to seize on “common goals” and “shared interests” to revise a dysfunctional federal education law, the Obama administration appears to be taking the gloves off.

In a conference call with the press this week, the Department of Education slammed the House Republicans’ proposed bill to reauthorize the Elementary and Secondary Education Act, also known as No Child Left Behind, which is scheduled for a House vote Friday.

The Department of Education called the bill regressive, “bad for children” and said it would amount to hundreds of millions of dollars of cuts to education spending. It then stopped short—but just barely—of calling the House bill outright racist.

Those fightin’ words come on the heels of yet another pugnacious White House report, released Feb. 13, which described the House Republicans’ proposal as a vehicle for shifting federal dollars “from high-poverty schools to more affluent districts.”

Rep. John Kline, the Chairman of the House Committee on Education and the Workforce, has parried the administration’s attacks, arguing that the bill does not cut funding at all and that it simply changes the way federal dollars are allocated to low-income districts, which serve mostly black and Latino kids.

But Cecilia Muñoz, the director of the White House Domestic Policy Council, told TIME that these issues are “very, very important” to the White House. “It’s very, very hard to reconcile the contents of this bill with the president’s long term goal of making sure every child is successful in school,” she said.

From the Obama Administration’s perspective, there are two primary issues at stake here. The first is how the new education law allocates federal dollars—known as Title I funding—to low-income school districts, which disproportionately serve black and Latino students.

Under the current version of ESEA, known as No Child Left Behind, Title I funding goes to districts with the highest percentages of low-income kids. The idea is that poor kids who attend schools full of mostly middle- and upper-middle-class kids are in a much better position—and therefore less in need of federal help—than poor kids who attend schools with lots of other poor kids. That analysis, a senior Department of Education official told TIME, is based on “decades of research” into how low-income students perform at different schools.

The House Republican proposal, which mirrors language in a recent draft of the Senate version of the bill, would fundamentally change that formula. Instead of funneling federal dollars to the schools with the highest percentages of low-income students, Title I funding would be allocated on a per-student basis. Kline has said that rejiggering that formula allows every low-income child who attends a public school to receive his or her “fair share” of federal assistance.

The Administration argues that would be a disaster. Allocating Title I funding on a per-student basis would lead to huge funding cuts in 100 of the largest school districts in the country, according to a White House report. Philadelphia City School District, which is 55% black, could lose $412 million, according to the DOE. Shelby County schools in Tennessee, which are 81% black, could lose $114 million.

Kline dismissed the White House’s claims, saying that they were “budget gimmicks” and “scare tactics” that entered “the realm of make-believe.”

The second issue at stake is the overall federal education budget. As it is, federal education spending is still at sequestration levels, roughly $800 million below where it was before. The House bill proposes to more or less leave that spending level in place, increasing it by only a smidgen—from $14 to 14.8 billion total—until 2021. It does not cut spending, staffers say, it simply retains a budget slightly higher than the current status quo.

A senior Department of Education official told TIME that while it’s technically true that the House bill does not cut spending, the point is that “it will feel like a cut,” especially in low-income school districts that, under the House bill, might see less Title I funding too. “The House bill cements sequestration level budget caps for an additional six years,” he said, and does not increase, even to keep up with inflation or rising enrollment. “The result is that by 2021, schools will have less money than they had before 2012.”

This week’s battle of words is mostly a dress rehearsal for a much larger fight over the final version of ESEA. Senate Education Committee Chairman Lamar Alexander expects to bring a Senate version the floor next month, with a vote on a final bill this summer.

The House bill, which is up for a vote on Friday, won’t have an easy path to victory. In addition to scathing criticism from the Obama administration, it is also up against a growing coalition of opponents on the right. This week, conservative mainstays like the Heritage Action and the Club For Growth have been pushing Republican lawmakers to vote against the bill on the grounds that it allows too much federal control over education.

In an effort to quell this conservative mutiny, Republicans adopted an amendment to the bill Thursday night that would allow school districts and states to come up with their own assessment systems—a move that further alienates the Obama Administration.

President Obama announced this week that if the final rewrite of the federal education bill ends up looking like the House version, he will veto it.

Muñoz, who spoke to TIME over the phone on Tuesday, said that the White House will fight hard for a bill that reflects “the president’s idea of what education should be.”

“It’s our job, the federal government, Congress’ job, to make sure every student is successful,” she said, adding that the House Republicans’ bill does not do that. “It’s just manifestly true that when you reduce resource to a place like Detroit and increase resources to a place like Grosse Pointe, you’re undercutting our primary goal of ensuring that every child is successful,” she said. 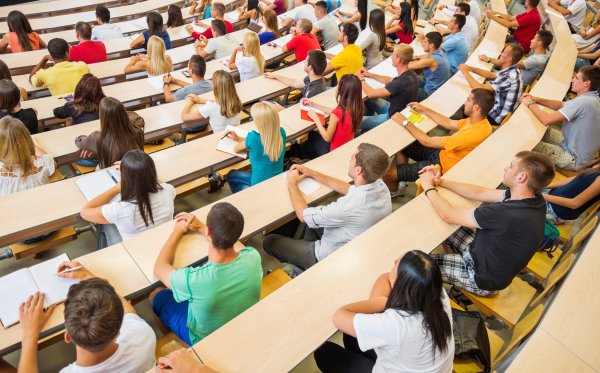 A Perfect Storm Is Heading Toward Higher Education
Next Up: Editor's Pick