What Actually Happened in the Falklands, With or Without Bill O'Reilly

The Apr. 19, 1982, cover of TIME, featuring the war in the Falkland Islands
Cover Credit: TODD SCHORR
By Lily Rothman

After more than three decades out of the spotlight, the Falkland Islands are back in the news, this time because of controversy over a claim that Bill O’Reilly has made misleading statements about his time covering the conflict that took place there in 1982.

O’Reilly says that he has always been honest about the fact that his reporting on the war was from Buenos Aires, not the islands themselves—as TIME reported back then, only 27 British reporters were able to get there—but Mother Jones magazine contends that his statement that he reported from active war zones suggests otherwise. The controversy continued Tuesday as O’Reilly further insisted that he never misled anyone.

But what exactly did happen in the Falklands?

In 1982, the archipelago had long been home to little else besides shepherds, sheep, 10 million penguins and a history of diplomatic disputes.

The islands had first been seen by British eyes in the 16th century, were claimed by the U.K. in the 17th century, went to Spain in the 18th century and back to Britain in 1833. Meanwhile, Argentina, which became independent from Spain during the period of Spanish control of the Falklands, claimed the right to the land—they had gained the Malvinas, their name for the islands, when Spain left, they argued—even over the objections of many who actually lived on the Islands. Argentina’s military ruler, General Galtieri, hoped to boost his own popularity by scoring a win in the islands. The locals, largely descended from Brits, did not support leaving the shelter of the British crown (which held them as a dependency, not an independent member of the commonwealth) for then-unstable but nearby rule.

In early April of 1982, the Falklands (and, by extension, the South Georgia and South Sandwich Islands) were defended by a few dozen British marines already on the islands when thousands of Argentine troops suddenly swept in. In fighting that lasted mere hours, the South American nation seized the territories from the U.K., which responded by breaking off diplomatic relations and, via the U.N., demanding that Argentina withdraw. Prime Minister Margaret Thatcher and her government promised that, were the request denied, the islands would be retaken by force. And, when the British navy arrived in the area—to enforce a blockade and evacuate the invaders—that result began to seem more and more likely.

Even as war loomed, TIME observed that the spectacle was “out of nowhere, it seemed, or out of another century.” One of the world’s major powers, no longer famous for its empire, and a country on another continent, fighting a sudden territorial war over a couple of islands? Just plain weird. Nonetheless, the pride of two nations was on the line, and citizens on both sides supported action.

President Ronald Reagan was unable to mediate a diplomatic solution and, at the end of the month, thousands of Argentine troops prepared for a confrontation. Rather than landing in the Falklands directly, the British forces landed on South Georgia Island, one of the Falklands’ dependencies, to the east of the main archipelago. South Georgia was quickly captured, bringing the two sides within striking distance.

By May, Britain’s Defense Secretary announced that the nation’s aircraft had taken action “to enforce the total exclusion zone and to deny the Argentines use of the airport at Port Stanley,” the Falklands capital. Military targets in the Falklands were bombed and other nations, including the U.S., ended their neutrality in the conflict. (The U.S. sided with England; the Soviets would eventually speak up for Argentina.) Fighting increased, as did patriotic support on both home fronts, even as the costs began to climb.

As the second month of fighting drew to an end, there was nothing quaint about it. As TIME reported:

The conflict finally ended in June, after a full-on fight for Port Stanley. The death tolls had reached about 250 British troops and nearly 700 Argentine. The Argentine troops were driven from the islands, and a few days later General Galtieri was replaced, even as his country continued to assert their claim to the Falklands. In England, Thatcher’s popularity soared.

And on the islands themselves, life had changed too: the mellow home of shepherds had become a military stronghold. The military investment improved the local economy and modernized the lifestyle there but did not fully resolve the conflict. Argentina still hopes to regain the territory. A 2013 vote found that 1,513 residents wanted to remain under U.K. control. Only three people voted to leave.

Read TIME’s full coverage of the beginning of the conflict, here in the TIME Vault: Gunboats in the South Atlantic 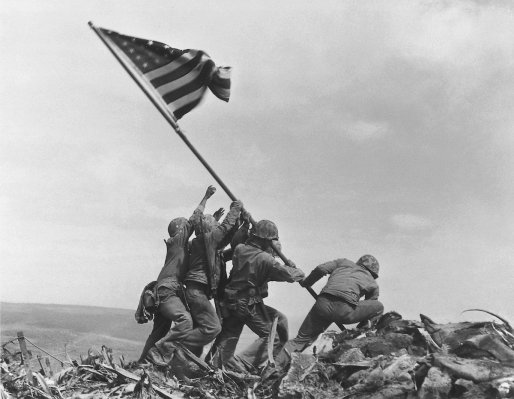 The Story Behind World War II's Most Famous Photograph
Next Up: Editor's Pick