Budget-Minded Travelers Have to Look Harder for Deals

One of the ways the TV show The Americans makes it clear that it’s a period piece is by showing its Soviet spies working at a travel agency. Yes, those were indeed different times when a family could support a decent lifestyle by booking trips for tourists. When the web emerged in the 90s, travel agencies were one of the first to fall by the wayside.

A generation of web startups emerged helping travelers to quickly find the cheapest fares on their own PCs: Expedia, Travelocity, Orbitz. Priceline offered its distinctive “name your own price” model before giving in and adopting the basic discount business model of the others. Meanwhile, independent travel agents in North America and Europe closed up shop.

After a while, consolidation became inevitable and it grew harder to differentiate between the myriad travel sites. A generation of younger startups like Kayak and Trivago emerged to improve on things, by offering meta-search engines that searched the travel search engines for deals that were getting harder to find. Airlines and hotels wised up to the game, inserting add-on fees onto their posted fares or offering deals available exclusively through their own sites.

In time, consolidation gobbled up the young startups: Priceline bought Kayak and Expedia acquired Trivago. Many of the older sites are still around , for anyone loyal to them–Travelocity, Hotels.com, Cheaptickets.com–only they’re owned by either Expedia and Priceline.

And earlier this month, when Expedia said it would pay $1.3 billion for Orbitz, it left basically two major online-travel sites. There are a few mid-sized travel companies remaining but some, like TripAdvisor, have seen their stocks rise on speculation that its shares could soon be in play.

For consumers, the trend probably isn’t a positive one. It may well make finding the best travel deals that much harder, now that there’s less incentive for Expedia and Priceline to compete with others for the best deals. The Justice Department may review the proposed Expedia-Orbitz deal for antitrust concerns. If regulators act to derail the transaction, Expedia will owe Orbitz $115 million, so Expedia has a strong incentive to see the acquisition go through.

In the meantime, competition from other web giants hasn’t really emerged. There have been reports that Amazon would enter the online-travel space in January, but they haven’t panned out yet, and Amazon’s plans may be as modest as some package deals as part of Amazon local. Google’s purchase of ITA hasn’t made it a huge presence in online travel, but it allowed it to create a spiffier interface for the same flight data that can be found on Kayak, Orbitz and others.

If there’s any hope for bargain-hunting travelers, it may come from the ever flowing emergence of new travel startups. The clearest example is Airbnb, the accommodation-rental marketplace that more than any other startup of the past decade has shown there’s still growth for new entrants. Airbnb was recently valued around $13 billion, or slightly less than the combined market value of Expedia and Orbitz and about a fifth of Priceline’s.

For airfares–or for hotels and vacation rentals that can’t be found in the lodging-sharing economy pioneered by Airbnb–there are mostly smaller players. HomeAway, which offers through VRBO.com and other sites vacation rentals that avoid Airbnb, has a $2.9 billion market cap. CheapOair and Skyscanner represent a new, more-meta kind of airfare engine that scours fares available to online travel agents.

In the end, consolidation may simply push budget-minded travelers away from the biggest companies and toward new startups that are figuring out new angles for finding travel values. Vayable, for example, connects travelers with locals who can act as tour guides, while Gogobot uses a social model to help tourists plan trips based on their interests.

And then there’s Flightfox. The San Francisco-based startup, sensing the difficulty of finding the best travel deals online in an era of consolidation, uses crowdsourcing to tap the expertise of others who know the tricks of finding deals. In a way, Flightfox has brought the online-travel industry back full circle to the traditional travel agent. After two decades of online travel sites, having a human book your itinerary may be the once again the best option. 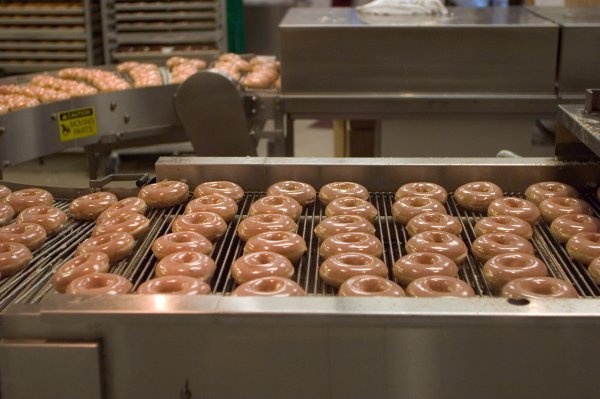 Krispy Kreme Is Giving Away 1 Million Donuts Today
Next Up: Editor's Pick