Why Iran Believes ISIS is a U.S. Creation

Iran has taken a lead role in defending the regime of Syrian President Bashar Assad and strengthening the Baghdad government in the war against the Islamic State of Iraq and Greater Syria (ISIS). But that doesn’t mean Iran views the United States as an ally in that war, even if they share a common enemy in ISIS.

Abdullah Ganji, the managing-director of Javan newspaper, which is believed to closely reflect the views of the government and the powerful Iranian Revolutionary Guards, says that U.S. support for ISIS is in fact a way of ensuring Israel’s security and disrupting the Muslim world in the cause of advancing Western interests.

“We believe that the West has been influential in the creation of ISIS for a number of reasons. First to engage Muslims against each other, to waste their energy and in this way Israel’s security would be guaranteed or at least enhanced,” says Ganji. “Secondly, an ugly, violent and homicidal face of Islam is presented to the world. And third, to create an inconvenience for Iran.”

Iran’s relations with the U.S. have been strained since the 1979 Islamic Revolution ousted the U.S.-backed Shah of Iran and negotiations are currently underway between Iran and Western nations, including the U.S., to ensure the Islamic Republic does not produce nuclear weapons.

Ganji went on to say that much of ISIS — its propaganda, structure and weapons — were all the work of the West. “A group that claims to be an Islamic one and has no sensitivity towards occupied Muslim lands in Palestine but is bent on killing Muslims as its first priority, it’s not a movement with roots in Islamic history. Not only many of its weapons but its methods of operation, its propaganda methods and many of its internal structures are Western, that’s why we are distrustful of the roots of ISIS,” he says.

“As the Supreme Leader [Ayatollah Khamenei] also said, [the coalition forces] have on a number of times even made weapon drops for ISIS. How is it that they have laser-guided precision munitions and bombs but drop weapons for the wrong people? And not only once but at least a number of times,” he says, referring to incidents when weapons dropped from U.S. aircraft landed in ISIS-controlled areas rather than the intended Kurdish-controlled areas.

“Iran cannot cooperate with the United States against ISIS because it doesn’t trust America, it doesn’t believe in their honesty in combatting ISIS. Iran can’t trust the U.S. to begin something and to continue to the end. It acts patronizingly and will change its path whenever it feels it is justified. We are also worried that the U.S. is using ISIS as a pretext to return its troops into Iraq,” Ganji says. “I believe that the U.S. prefers a weak ISIS that cannot be a major threat but will still cause inconvenience for Iran, Iraq and Syria and generally what they themselves called the Shiite crescent.” 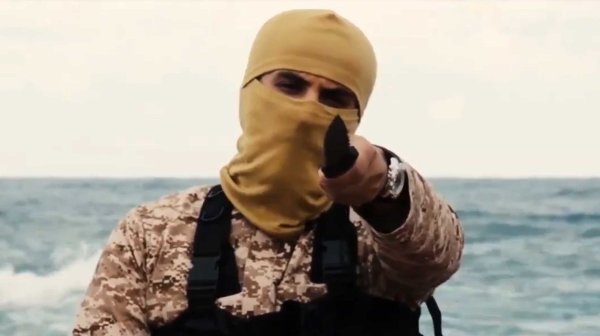 How ISIS Threatens Europe
Next Up: Editor's Pick