ISIS Faces a Crowded Landscape of Terror in Pakistan

Women mourn their relative Mohammed Ali Khan, 15, a student who was killed during an attack by Pakistani Taliban gunmen on the Army Public School, at his house in Peshawar in 2014.
Zohra Bensemra—Reuters
By Omar Waraich

The brutal methods that the Islamic State of Iraq and Greater Syria (ISIS) has become notorious for were already seen some years ago, first in Afghanistan and later in Pakistan, as the two branches of the Taliban in those countries took root. The Pakistani Taliban, in many ways, are the closest analogue of the terror group now expanding across the Arab world.

Formed in 2007, the Pakistani Taliban seized territory, imposed its own brutal brand of Islamic law, executed opponents — including landowners, politicians, and others they deemed to be guilty of crimes of “vulgarity” and “heresy”. Women from among the famous “dancing girls of Swat” were found dead, their bodies dumped in the central square of Swat’s main town. Preachers of Sufi Islam, a syncretic form of the religion that puts a heavy emphasis on ascetic practices, were brutally killed – their bodies cut apart and hanged publicly.

Beheadings were also a constant feature. When the Pakistani Taliban kidnapped over 100 Pakistani soldiers in South Waziristan in 2007, they severed the heads of many, especially the Shia soldiers. A sword was used to cut across both ways and the head then lifted from the torso. The bodies of journalists were also discovered in some cases, dumped, with bullet holes in their backs.

The Taliban, like ISIS, share a sectarian ideology. Those whom they do not deem to be in line with their brutal brand of Islam, they declare to be non-Muslims. Those who aren’t Muslims, they deem to be “worthy of being killed.” This has led to attacks on army officers and religious minorities of various stripes — Shia Muslims, Ahmadi Muslims, Hindus and Christians.

The Taliban work closely with both al-Qaeda and long-established anti-Shiite groups like Sunni extremists Lashkar-e-Jhangvi. There is a lot of slippage between these groups; the boundaries between them are often ill-defined. Also, like ISIS, these groups will turn to kindap and ransom as a means of generating funds. Warren Weinstein, an American academic and development expert in his 70s, is still being held by al-Qaeda in Pakistan’s tribal areas after having been sold up through various groups.

This makes Pakistan both an attractive breeding ground for ISIS, but also one that is so crowded out by entrenched terror groups that they may struggle to break into the market. “It’s an already busy landscape for militant groups,” says Simbal Khan, Pakistan scholar at the Wilson Center in Washington. “There’s no vacuum for a new group.”

That doesn’t mean they are not trying, and in some cases, already finding success. The Pakistani government has issued reports warning that “ISIS” or “Daesh” (as it is known by its Arabic acronym) has collaborated with sectarian militant groups, like Jundallah and Lashkar-e-Jhangvi, along the border with Iran. Elsewhere, in November 2014, a series of former Pakistani Taliban militants announced their allegiance to ISIS and al-Baghdadi.

In Pakistan’s second city of Lahore, graffiti has appeared celebrating ISIS. Government officials and analysts say this is a more a feature of ISIS propaganda than any evidence that the group has operational capacity in Pakistan. Still, that same month, a number of ISIS activists were arrested from Lahore — they are thought to have been former members of anti-Shiite organizations that have a foothold in Punjab province, of which Lahore is the capital.

After the Peshawar massacre, where Taliban soldiers slaughtered nearly 150 people at a public school, there appears to be greater clarity among Pakistan’s civilian and military leadership about the need to fight terrorism. Prime Minister Nawaz Sharif announced near the end of 2014 that there would no longer be any distinction made between “good militants” and “bad militants.” The policy of backing militants who attack Afghanistan and India while only fighting those who launched terror attacks at home in Pakistan would be reversed.

While the jury is still out on whether this will become official and lasting policy, the army chief Gen. Raheel Sharif — the most powerful man in Pakistan — has said that he will not allow a group like ISIS to establish a base inside Pakistan. They are watching events in the Arab world with mounting anxiety, but Pakistan and Afghanistan’s focus remains very much local for the moment. “The Pakistani leadership, in civvies and in uniform, are on one page,” says Khawaja Asif, Pakistan’s Defense Minister. “We must fight for our existence, and the existence of all humanity.” 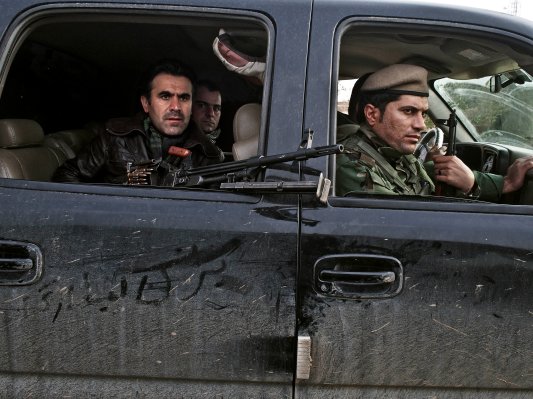 The War on ISIS
Next Up: Editor's Pick