The host of Food Network’s Diners, Drive-Ins and Dives Guy Fieri officiated at a mass wedding ceremony in Miami, Florida on Saturday for 101 same-sex couples.

Celebrity chef and Florida native Art Smith, who has cooked for Oprah Winfrey and former governor Bob Graham, organized the giant wedding on Miami Beach, writes the Associated Press. He summoned some of the country’s top chefs, who were in town for the South Beach Wine and Food Festival, to help out.

Smith started planning the event in January, when he heard Florida had lifted a ban on same-sex marriage. He went to Twitter using the hashtag #101gayweddings and invited the first 101 couples to take part in the free wedding.

Smith explains the ‘101 Gay Weddings’ event was inspired by the movie 101 Dalmatians and is a dig at Florida Attorney General Pam Bondi, who has fought against lifting the ban on same-sex marriage.

“We have our own Cruella De Vil, Pam Bondi. She was determined that she was going to prevent equality from coming to Florida,” he said.

After the couples walked down the aisle they were treated to a delectable wedding feast and a seven-tier cake made by Ace of Cakes star Duff Goldman. 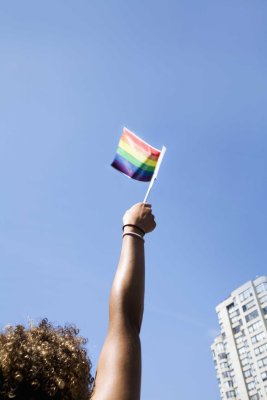