More studies hint that it’s possible to “train” the immune system to tolerate peanuts even if it doesn’t want to by giving children with peanut allergies small amounts of peanuts over a period of time. But researchers now report that it may be possible to prevent peanut allergies altogether. In a study published Monday in the New England Journal of Medicine, researchers led by Gideon Lack, a professor of pediatric allergy at King’s College London and Guy’s and St. Thomas’ Hospital, found that non-allergic young infants who ate small amounts of peanuts at an early age had a much lower rate of peanut allergy than those who avoided nuts altogether for five years.

MORE This ‘Peanut Patch’ Could Protect Against Peanut Allergies

“We are actually preventing the immune response from going along a pathway that leads to clinical reactivity, and it’s like, wow,” says Dr. Rebecca Gruchalla, professor of medicine and pediatrics at University of Texas Southwestern Medical Center who wrote an accompanying editorial. “It’s pretty cool to actually divert and keep the immune system from developing along a pathway that we don’t want it to go.”

Lack and his senior co-investigator George Du Toit, a pediatric allergy consultant at the College, conducted their study on 640 infants with severe eczema or egg allergy. These babies were chosen because of their increased risk of developing other food allergies, including to peanuts, and were enrolled when they were between four months and 11 months old. That’s an important window of opportunity, says Lack, to intervene and retrain the immune system to become tolerant to peanuts.

MORE The Bacteria That May One Day Cure Food Allergies

The group was divided into babies who showed a positive skin prick test to peanuts, and another who were negative. Each group was then randomly divided into those who were given to small amounts of peanuts to eat and those who were told to avoid it for five years. (Those with positive skin tests were given smaller amounts in gradually increasing doses if they could safely tolerate them, while those who were negative for peanut allergies were given larger doses.) Because the babies started out with varying levels of egg allergy and eczema, they also had differing levels of antibodies against peanuts; some had higher levels indicating they were already on the path toward developing allergic reactions to peanuts, even if they hadn’t tested positive and weren’t already allergic.

What’s noteworthy about the findings are that all groups that ate the peanuts, regardless of how far along they were toward developing peanut allergies, showed lower rates of peanut allergy when they were 5 compared to the babies who didn’t eat peanuts at all. The fact that even babies who were negative for peanut allergies at the start of the study, but who might go on to develop them, could prevent the allergy is a potentially game-changing idea.

It’s not clear how long the protection from peanut allergies lasts; other studies that used similar food exposure strategies in children with egg and milk allergies showed that as soon as the exposure to the allergy-causing food was stopped, the tolerance waned and the allergic reaction returned. Lack and his colleagues are continuing their study by asking all of the participants to avoid eating peanuts for one year and then giving them peanuts to see whether the peanut-consuming group remain non-allergic. “That will tell us whether we truly prevented peanut allergy in the long run or just put the brake on the development of peanut allergy,” he says.

Whether the approach will work on other food allergies, or even other allergies to cats, dogs or pollen, isn’t clear. Lack and his team have not, for example, fully analyzed the data on whether the peanuts helped the babies’ eczema or egg allergies to abate. But the results hint that the immune response may be redirected, at least for some allergens, toward a non-allergic response.

MORE Can Peanut Allergies Develop in the Womb?

It also hints that the rise in peanut allergies, especially in the U.S., may be in part of our own making. For years, the American Academy of Pediatrics (AAP), for example, advised parents to avoid giving their babies peanuts in order to protect them from develop allergic reactions. Mothers-to-be were even advised to avoid eating peanuts during pregnancy to reduce their babies’ chances of becoming allergic. But recent studies in animals show that the immune system’s response to things like peanuts, egg, milk and other allergens may be a balance between exposure through the gut and exposure through the skin. Skin exposure tends to trigger aggressive immune responses that treat most new objects, including peanut protein, as foreign, and therefore sensitizes the body to recognize the food as foreign and dangerous. Eating such proteins, on the other hand, presents them in a different way to the immune system that recognizes their nutritious value. When these two routes are in balance, the gut-based system overrides the skin-based signals and the body sees peanuts as friend rather than foe.

But if babies aren’t eating peanuts, then the signals about peanut proteins entering via the skin become dominant, and nuts become an unwanted intruder rather than a welcome source of food. That’s why, for example, Lack and others believe that rates of peanut allergy are higher in countries like the U.S. where parents have been advised to avoid feeding their babies peanuts, compared to countries like Israel, where infants are given peanuts early on.

Based on recent findings, the AAP in 2008 changed its advice and now does not say parents should avoid feeding their babies peanuts. They haven’t concluded yet whether giving peanuts to infants early in life is a better choice, but given their latest data, Lack ,Du Toit and Gruchalla believe that it’s something that parents should discuss with their pediatricians and allergy specialists. We recommend that peanut be introduced very early on once weaning has been established,” says Du Toit. “Our study demonstrated that it’s safe as long as whole nuts are avoided for their choking hazard.” For children who come from families with no history of food allergies and whose parents or siblings don’t have other food allergies, peanuts can be started right away. For those who have a family history of food reactions, parents should consult with an allergist to get a skin prick test and then work with the specialist to determine the safest way to gradually introduce peanuts into their babies’ diet.

Such exposure to possible food allergens “is not part of clinical practice yet, but I think it will be likely that there are going to be experts who are going to get together and revise the guidelines to make it more common,” says Gruchalla. And hopefully lower rates of food allergies in coming years. 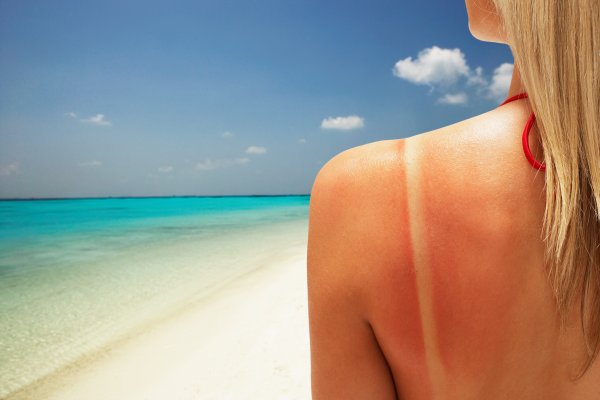 Here's Why You May Soon Be Using Sunscreen in the Dark
Next Up: Editor's Pick