The regime of Syrian President Bashar Assad has long had a pragmatic approach to the Islamic State of Iraq and Greater Syria (ISIS), says a Syrian businessman with close ties to the government. Even from the early days the regime purchased fuel from ISIS-controlled oil facilities, and it has maintained that relationship throughout the conflict. “Honestly speaking, the regime has always had dealings with ISIS, out of necessity.”

The Sunni businessman is close to the regime but wants to remain anonymous for fear of repercussions from both ISIS supporters and the regime. He trades goods all over the country so his drivers have regular interactions with ISIS supporters and members in Raqqa, the ISIS stronghold in Syria, and in ISIS-controlled areas like Dier-ezzor.

The businessman cites Raqqa’s mobile phone service as an example of how there is commerce between the regime, Syrian businesses, and ISIS. The country’s two main mobile phone operators still work in Raqqa. “Both operators send engineers to ISIS-controlled areas to repair damages at the towers,” he says. In addition, there are regular shipments of food to Raqqa. “ISIS charges a small tax for all trucks bringing food into Raqqa [including the businessman’s trucks], and they give receipts stamped with the ISIS logo. It is all very well organized.”

The businessman has a driver who lives in an ISIS-controlled area near Dier-Ezzor. “My driver is always telling me how safe things are at home. He can leave the door to his house unlocked. ISIS requires women to veil, and there is no smoking in the streets. Men can’t wear jeans either. But there are no bribes, and they have tranquility and security. It’s not like there are killings every day in the streets like you see on TV.”

And, he notes, ISIS pays well — slightly less than the pre-war norms but a fortune in a war-torn economy: engineers for the oil and gas fields are paid $2,500 a month. Doctors get $1,500. Non-Syrians get an expatriate allowance, “a financial package that makes it worthwhile to work for ISIS,” says the businessman.

Assad does not see ISIS as his primary problem, the businessman says. “The regime fears the Free Syrian Army and the Nusra Front, not ISIS. They [the FSA and Nusra] state their goal is to remove the President. But ISIS doesn’t say that. They have never directly threatened Damascus.” As the businessman notes, the strikes on ISIS targets are minimal. “If the regime were serious about getting rid of ISIS, they would have bombed Raqqa by now. Instead they bomb other cities, where the FSA is strong.” That said, the businessman does not believe that the regime has a formal relationship with ISIS, just a pragmatic one. “The more powerful ISIS grows, the more they are useful for the regime. They make America nervous, and the Americans in turn see the regime as a kind of bulwark against ISIS.”

A senior Western diplomat who specializes in the Syrian civil war agrees that ISIS is seen as an asset by Assad. “They will do whatever it takes to devalue the opposition, even if it means strengthening ISIS. They know that if it comes to choosing between the black flag [of ISIS] and Damascus, the international community will choose Damascus.” And the strategy has worked extremely well. “The way it’s going now, it’s a matter of months, not even a year, that the moderate opposition is so weakened that it won’t be a factor anymore. So in just a few months from now the regime will be able to achieve its strategic goal of forcing the world to choose between Damascus and the black flags.”

So by ignoring the conflict between the Syrian opposition and the Assad regime to focus purely on ISIS may solve problems in the short term, says the diplomat, “but there will be more problems to come. These are the ingredients for a further escalation of the conflict — alienating large parts of the Sunni population, so that they have no choice but to join ISIS. Not for ideological reasons, but because they will do whatever it takes to overthrow the regime in Damascus.” Not only that, it will widen the geographical boundaries of the conflict by making this a fight of all Sunnis. “It’s a clear recipe for further escalation well beyond the geographical boundaries of the current conflict.”

However, Damascus believes that once it has neutralized most of the opposition, it can then defeat ISIS with ease. “ISIS alone, the regime can deal with them. What Assad wants is international recognition of his legitimacy as Syria’s President,” says the businessman. “When the war is over, he can easily handle ISIS with the help of Hizballah and the Iranian Revolutionary Guard.”

Read next: Don’t Take the Bait: The U.S. Should Not Send Troops to Fight ISIS 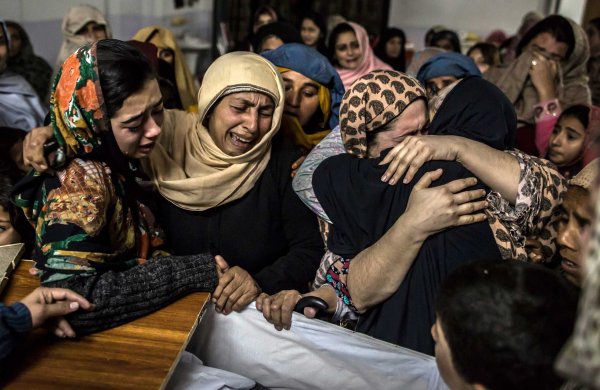 ISIS Faces a Crowded Landscape of Terror in Pakistan
Next Up: Editor's Pick