Don't Tear Down Patricia Arquette for a Well-Intentioned Speech

When Patricia Arquette took the stage to accept her Academy Award last night for Best Supporting Actress in Boyhood, she made a brave political statement and demanded gender equality. “To every woman who gave birth to every taxpayer and citizen of this nation, we have fought for everybody else’s equal rights,” Arquette said in her speech. “It’s our time to have wage equality once and for all and equal rights for women in the United States of America.”

Her words were initially greeted with with loud cheers, especially from Meryl Streep and Jennifer Lopez, whose enthusiasm culminated in one of the most-shared memes of the evening.

But no good deed goes unpunished — especially on social media — and within hours of the ceremony, Arquette was being attacked by people who said she was prioritizing the rights of white women over those of LGBTQ people and people of color. These criticisms are legitimate and deserve to be heard. Still, Arquette’s heart was in the right place and it’s not right to completely dismiss one of feminism’s most visible advocates.

It wasn’t Arquette’s speech that came under fire so much as her comments in the pressroom later.

“It’s time for women. Equal means equal. The truth is the older women get, the less money they make. The highest percentage of children living in poverty are in female-headed households. It’s inexcusable that we go around the world and we talk about equal rights for women in other countries and we don’t,” she said. “It’s time for all the women in America, and all the men that love women and all the gay people and all the people of color that we’ve all fought for to fight for us now.”

Many people on Twitter, including feminists like Roxane Gay and Morgan Jerkins, wrote that Arquette’s plea was tone-deaf for suggesting that gay people and people of color have achieved equality while women have not. They’re absolutely right. Feminism has often come under fire for being a movement for white women’s rights, not all women’s rights. Comments like these make queer women and women of color hesitant about joining the mainstream movement, which can seem exclusionary and oblivious to intersectionality.

But out of last night’s winners, few used their time onstage to get political. Director Alejandro González Iñárritu begged for respect for Mexican immigrants; John Legend and Common spoke about why the messages of Selma still resonate today; and Arquette made a plea for women’s rights. The rest of the show was dull and occasionally verged on racism. On a night when the nominees were overwhelmingly white, Octavia Spencer was forced to stay in her seat and stare at a box, Sean Penn made an offensive green card joke about Iñárritu and Neil Patrick Harris managed to botch the names of both Chiwetel Ejiofor and David Oyelowo.

There was a lot to criticize at this year’s ceremonies, and the well-meaning Patricia Arquette should rank a lot lower on that list than, for example, Sean Penn.

Let’s state the obvious: the wage gap exists and needs to be closed. According to the White House, full-time working women earn just 77% of what their male counterparts earn. (That number is under dispute — the Pew Research center recently estimated it’s closer to 84%, but that’s still a significant gap.) Though some politicians might have you believe that women just work lower-paying jobs, studies show this gap persists within industries: female lawyers make 82% of what their male peers earn; physicians 77%; financial specialists 66%. And research shows the pay gap exists for women without children — women who don’t take time off to have babies and raise them.

The wage gap affects women of all races, and Arquette didn’t demand that we only close it for white women. Arquette’s message was that women ought not subordinate the fight for their own rights over fights for other people’s rights. As she wrote on Twitter today, we can fight for rights for different groups of people simultaneously; we just shouldn’t forget women along the way. Sure, her speech wasn’t perfect, but she had the right intentions.

While Gay and others had more nuanced takes on Arquette’s comments — supporting her message while critiquing her phrasing — folks on Twitter are dismissing her entirely, and that’s dangerous. Even while we recognize the problems with her speech, feminists should be careful not to tear down their best and most visible advocates.

MORE These Are the Worst Paying Jobs for Women

Last year, Lena Dunham — perhaps the most famous feminist in Hollywood — endured a similar backlash. In a strange turn of events, feminists joined conservatives in attacking the Girls creator over a section of her book in which she describes her seven-year-old self looking at her little sister’s vagina. They called her a sex offender and attacked the feminists who tried to defend Dunham’s actions as normal childhood behavior. A group of feminists even wrote an open letter to Planned Parenthood asking them to drop Dunham as a rep.

Love her or hate her, there’s no greater public advocate for feminism in pop culture than Lena Dunham. Dunham personally convinced Taylor Swift (and therefore millions of tweens) that calling yourself a feminist is okay; she wrote about her own sexual assault so that other victims would feel comfortable talking about their experiences and reporting them to the authorities; she created a show with explicitly feminist themes. Joining conservatives in attacking people like Dunham and Arquette only serves to hobble the movement.

Different women can choose to express their feminism in different ways. But when women begin to tear down their best, most popular advocates, we hurt our own cause. As Sally Kohn wrote at The New Republic after the Dunham incident: “The minute feminism becomes hypercritical and humorless, it becomes too easy for the mainstream to dismiss our more valid complaints.”

Let’s take to social media to protest the fact that Selma director Ava DuVernay was overlooked for an Oscar nomination and that red carpet interviewers insist on asking women about the dresses they are wearing instead of their work — and let’s not vilify the people actively trying to create change, even when they do it imperfectly.

This post was updated to include Monday’s tweets from Patricia Arquette.

Read next: Lady Gaga’s Performance at the Oscars Could Redefine Her Career 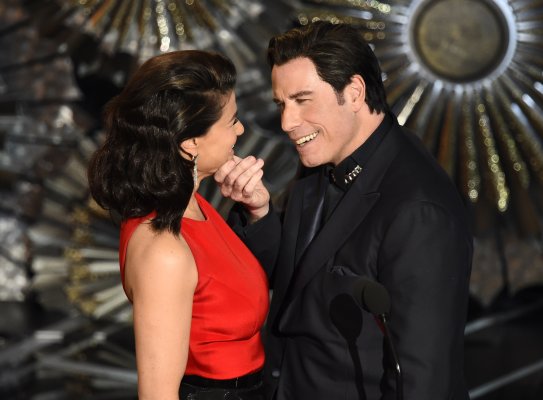 Watch John Travolta Finally Get Idina Menzel's Name Right at the Oscars
Next Up: Editor's Pick