John Oliver took viewers to court on Sunday’s Last Week Tonight to have a little chat about the judiciary.

Oliver’s interest in the subject was ignited when Alabama Chief Justice Roy Moore told the state’s probate judges not to issue marriage licenses to same-sex couples, defying a ruling by a federal judge that the state’s ban on same-sex marriage was unconstitutional. Moore, who has a long history of defying federal law when they conflict with his religious beliefs, said that under his interpretation of the law, federal law had no bearing in Alabama.

As Oliver pointed out, that is not exactly correct as the U.S. Supreme Court’s job is to strike down laws that are unconstitutional. However, Moore’s actions spurred Oliver to take a closer look at the role of the elected judiciary in the United States, which is second only to Bolivia in the size of its elected judiciary.

While some judges in the U.S. are nominated and confirmed, others, especially at state level, must run for election to win a term in office. To illustrate the occasional wackiness that transpires in judicial campaigns, Oliver showed a series of jaw-dropping commercials that judges run during their campaigns in the hopes of appealing to voters. (The judge who named his son “Justice” is especially uplifting.)

The problem with an elected judiciary, according to Oliver, is that when it comes to judging people, the right decision is sometimes unpopular and unpopular decisions and elections are uneasy bedfellows. In fact, academic studies have shown that judges change their behavior in election years issuing harsher sentences to appear tough on crime. In Oliver’s opinion, that is unfair. Legal rulings, he said, should not be based on popular opinion but on rational jurisprudence.

For Oliver, though, that’s not the most unsettling aspect of elected judges. That is reserved for judges who ask for and receive campaign donations from lawyers — lawyers who will then try cases in front of those judges. 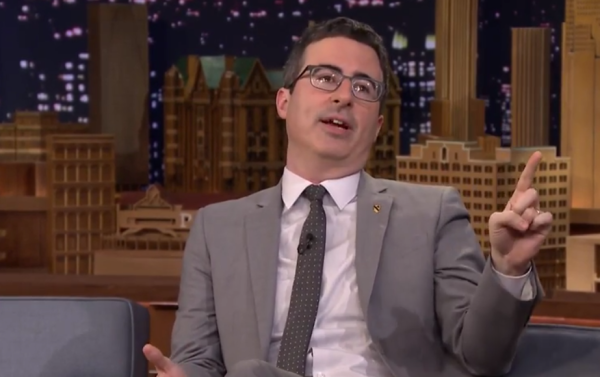 John Oliver Has the Perfect Idea for Who Should Take Over <em>The Daily Show</em>
Next Up: Editor's Pick