Mayweather vs. Pacquiao Fight Sells Out in 15 minutes

In the wake of confirmation that Floyd Mayweather and Manny Pacquiao would have their long-awaited fight at the MGM Grand in Las Vegas on May 2, the hotel reportedly sold out in just 15 minutes, according to USA Today.

The MGM Grand has a capacity of about 17,000, depending on the arena’s configuration. Thousands of spectators are likely to travel to Las Vegas during the weekend to view the fight at various venues.

Speculation about a fight has existed for several years, with several developments occurring at the beginning of this year.

• Mayweather to Pacquiao: ‘We have to make this fight happen’

As it appeared more likely the two would square off, rates at the hotel rose steadily, according to USA Today. On Thursday, rates were as high as $615 per night for May 1 and May 2, one of the more popular weekends of the year.

Mayweather and Pacquiao are considered by many to be the two best fighters of their generation. After the announcement, Mayweather was named the favorite at -295, while Pacquiao’s odds were put at +230, according to Sportsbook.

No official details of the fight contract have been release, but reports indicate thatthe prize could be as high as $250 million. According to SI’s Chris Mannix, Jim Lampley, Al Bernstein and Roy Stein will call the fight. 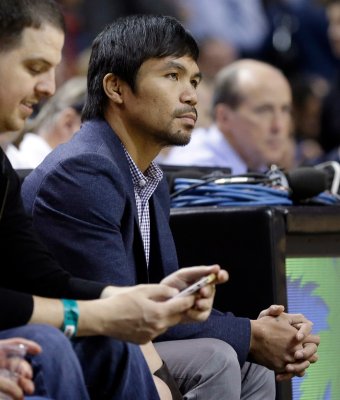