The Dad 2.0 Summit: Making the Case for a New Kind of Manhood

At the fourth annual Dad 2.0 Summit, Dr. Michael Kimmel reviews the four classic rules for what it means to be a “real man”:

Or so they say. “Traditional ideas of masculinity,” Kimmel says, “can get in our way of being the kind of fathers we want to be.”

This summit, nearly double the size it was in 2012, has been at the forefront of an ongoing revolution in how America perceives fatherhood. The new dad, the kind Kimmel’s talking about, is one who is sexy and strong because he’s involved and nurturing — just as capable of being a parent as Mom is and happily doing half the work. The attendees that Kimmel is giving his keynote speech to in San Francisco are the kind of daddy bloggers (and mommy bloggers) who have raged against the “bumbling father” stereotypes, as well as the many, many sponsors who subsidized their tickets.

For all the progress the revolution has made, Kimmel, executive director at the Center for the Study of Men and Masculinities at Stony Brook University in New York, is here to spread the message that it’s not time for back-patting yet, that men need to do more to support other men if America is really going to redefine what masculinity looks like (e.g., not just a big emotionless tree).

Young fathers today are more involved than previous generations. They are doing more housework. They are doing more of the child care. Yet, Kimmel says, the fact that a generation of men is doing more than their fathers did — which might have been financially supporting the family and never touching a diaper — can lead to “premature self-congratulation” that belies how much work there is left to do. Since 1965, according to the Pew Research Center, women have nearly tripled the amount of paid work they do each week, and while fathers are doing more to help with the house and kids, they’re still doing half what the moms are. Millennial and Gen X fathers often say they believe in having absolutely equal, 50-50, split-down-the-line relationships, but the reality is that more of the caregiving is still falling to Mom.

One of Kimmel’s core culprits when it comes to that gap is parental leave, as well as the lack of men taking it when it is available. Some companies that are dying to be on the cutting-edge of employee care, like Google and Facebook, are handing out three or more months of paid paternity leave, and some cities are working to mandate time off for moms and dads. But the U.S. is sorely lagging. Unlike almost all industrialized nations in the world, the American government does not mandate paid parental leave. Only about half of first-time moms are able to take paid leave. And according to the Society for Human Resource Management, only 12% of U.S. employers offer any paid paternity leave. So staying home in the early days, with or without pay, more often falls to the women.

The cycle of Mom staying at home in the first few weeks or months while Dad works can lead to a storyline like this: Man and woman believe they’re in a completely equal relationship. Man and woman have child. Woman takes maternity leave while Dad works. She gets more practice at child care. More child-care tasks start falling to her. Over the years, thing after thing related to the household and family falls to woman, many times unnoticed. A little cleaning here. A little appointment-scheduling there. Eventually, the relationship is decidedly unequal, even though that’s not what either of them planned. Opening his speech, Kimmel showed a picture of his son holding up a sign. It read, “I need feminism because it’s easy to ignore sexism when it works in our favor. #ItsOnUs.”

In his work with corporations, Kimmel was early on told that many men weren’t taking paternity leave when it was offered. So where’s the need the offer it?!, the corporations said. This is where the men-supporting-men thing comes in. Kimmel went and talked to men who hadn’t taken leave when their children came. What he found out was that when they told male colleagues they were considering it, they got responses like, “Oh, so you’re not really dedicated to your career.” Another man was told, “Oh, that’s great. You should go. We’ll just put you on the daddy track.” (Read: Not up for the next promotion.)

Upon finding out that one man was considering leave, a partner at his firm leaned over to him and said that he was 64 years-old with three grown kids and he didn’t know any of their birthdays; men have to make sacrifices at home. In many cases, this kind of anti-dad response was enough to keep men from taking the benefits they could. A fella doesn’t have to be a major league baseball player missing games to be with a newborn in order to be derided for putting family ahead of work.

“For the past 40 years, women have been coming out as workers,” Kimmel said toward the end of his speech. “Now men have to come out in public, in our workplaces, as dads.”

Joseph Fowler, a 38-year-old father at the summit, has gone all in and is staying at home with his two kids, a 5-year-old girl and 3-year-old boy. He’s walking around the sponsor room at the summit, where radial saws are being touted next to apple sauce, where the Lego displays are crowned with red flags and pink umbrellas. Fowler says that the lessons he learned about how to be a man from his father were precisely the rules that Kimmel laid out in his speech — to be tough, to be stoic. He looks tough, with broad shoulders and a giant ring he got after the college-football team he coached went to the Orange Bowl. And he says he’s trying to raise his son with a different idea of what it means to be a man. “You can be manly and compassionate,” he says. “And it’s O.K. to show your emotions.” He calls himself a “dad advocate” and says he’s mentoring other dads in the same vein, teaching them that it’s masculine to be a present, responsive father.

The brands at the summit, in far greater number than 2012, are clamoring to be on the right side of people like Fowler. Esquire is live-streaming dad talk at the summit. Lee is giving dads a custom-fit pair of jeans. Kia is letting them test-drive cars. Lego is throwing a party at LucasFilm studios with actual storm troopers walking around. The primary sponsor of the event continues to be Dove Men+Care, which ran a much-talked-about ad during the Super Bowl that featured loving fathers who exemplified “real strength” (which was also the wi-fi password at the summit). These ads for a new generation of dads have been pushed in part by conferences like this, and they’re going to help make it harder for men to scoff at other men who want to put home on par with, or before, the office. General Mills wants to be the official “cereal of dadhood,” which is a 180 from the 2012 Huggies commercial — which showed dads with babies in the vein of monkeys with typewriters — that prompted protest among (and got tons of attention for) the dads at the first Dad 2.0 conference.

At one point the head marketer at Unilever, Dove’s parent company, takes the stage. Behind her flash pictures of men playing with their kids and holding their kids. “This is what being a strong man looks like,” says Jennifer Bremner. “Showing emotion, helping a friend, consoling a child.” She tells the crowd that she has been in marketing a long time and her brother had never much commented on her career, until he saw their ad with the same message that played during the Super Bowl. The text she got from him had two words on it, she says: “About time.” The crowd filled the hall with claps of approval. 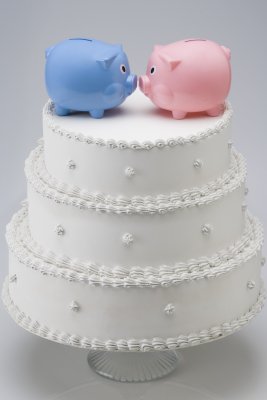 Why I Finally Combined Money With My Spouse
Next Up: Editor's Pick