The 2015 Oscars broadcast may reflect the demographics of the Academy of Motion Picture Arts and Sciences voters—who are overwhelmingly older Anglo men—but it won’t reflect the demographics of the rest of the country. All 20 acting nominees are Anglo, and all the directing and screenwriting nominees are male. The Academy Awards may not tell the whole story, but they certainly indicate that many American stories still aren’t being told on our screens. In advance of the Zócalo/UCLA Bunche Center “Thinking L.A.” event “Why Can’t Hollywood Look Like America?”, we asked media scholars: What are the critical and integral contemporary American stories that Hollywood is not telling?

Camille Fojas — Stories of inequality and social and economic immobility

Hollywood is an industry in pursuit of profit. It is not an open marketplace of new imaginings or ideas unless those ideas draw audiences and increase profits. That said, it has all but ignored a major social and cultural upheaval. Since the economic collapse that began in 2007, there is heightened awareness of the deepening economic inequality of U.S. culture. While Hollywood responded quickly to the economic collapse with epic tales of the cruel machinations of the big banks and their minions, it has yet to tell the story of the most economically vulnerable and those burdened by oppressive student loan and mortgage debt. It is more profitable to deliver a melodrama about malevolent banks that fits neatly into the age-old morality tales of good versus evil. We have yet to see the story of those at the bottom of the labor market—those who are out of resources, silver linings, and options. The economic crisis intensified wage stagnation and further limited opportunities for employment and upward mobility. This new scenario does not square with the Hollywood myths around the “American Dream” centered on “rags to riches” storylines. The story of inequality, of the deepening divergence between rich and poor, and social and economic immobility, is the real story of our times.

Camilla Fojas is Vincent de Paul Professor of Latin American and Latino Studies and director of Critical Ethnic Studies at DePaul University. Her newest book is Freefalling: Pop Culture and the Economic Crisis.

Hollywood trades in the spectacular, the dramatic, the titillating. Even romantic comedies usually elevate the “everyday” business of love with fantasies of wealth. To some degree, that’s OK. Audiences gravitate towards escapist films. I do. But I’d like Hollywood to tell these spectacular tales with actors who look more like contemporary America.

I want to see more women and nonwhite people on screen. I’d like to see a good romantic comedy about a black couple falling in love that can exist without being pigeonholed as a “black movie.” I’d like to see the Latina version of John Wick (2014) or Office Space (1999). I don’t necessarily want to see films about race or women’s issues. Right now, I just want to see some different folks lead.

Hollywood too frequently employs white actors to tell universal stories; a continued reliance on the white “everyman” results in films that lack the texture of (contemporary) America. Where are the sci-fi protagonists with curvy bodies or the vampires with brown skin and curly hair? Such long-standing inequities stem from racist and sexist standards of beauty that have governed a racist and sexist system of film production and stardom in the United States since the silent era. But at a time when 44 percent of moviegoers are nonwhite, it is unbearable that 76 percent of the bodies on screen remain white.

So, I have hopes for the new Ghostbusters starring Kristen Wiig, Melissa McCarthy, Leslie Jones, and Kate McKinnon. While the film highlights Hollywood’s reliance on “sure hits” that often recycle white male protagonists along with narratives, this version of Ghostbusters promises something more: a crew of women that represent radically diverse body types in a film that is presumably not about their looks or struggles as women. What an escapist fantasy!

Priscilla Peña Ovalle teaches film and television in the cinema studies program at the University of Oregon. She is the author of Dance and the Hollywood Latina: Race, Sex, and Stardom (Rutgers 2011) and is currently working on a project about race and hairstyles in Hollywood.

Hollywood tells many stories about race, but those that lay bare invisible power relations—the struggles of not individuals but of a larger segment of society against institutional constraints—are most rare. These stories are difficult both because such institutional forces are hard to name and personify and because Hollywood, an institution itself, has a vested interest in muting these images.

The problem of incarceration, and the prison industrial complex, is a massive rather than merely personal story. Sixty percent of black male high school dropouts will go to prison before age 35. In the process, they and their families will find many of the gains of the civil rights era effectively reversed, from voting rights (which are often denied to felons) to their prospects of reaching middle-class status.

Such stories remain rare in American media, partly because Hollywood censors long forbade broad condemnation of the criminal justice system as a professional courtesy to police and judges. However, stories from behind prison walls—often told by independent cinema, primarily documentaries but also feature films like Ava DuVernay’s Middle of Nowhere (2012)—stand to reveal much about contemporary America.

Experiments like Richard Linklater’s Fast Food Nation (2006) and John Sayles’ City of Hope (1991) show how narrative cinema can operate as institutional exposé. One challenge is motivating the often individualistic, solipsistic art of cinema to tell the intricate stories of the many. How might we, for example, tell a cinematic story that makes palpable the power and impetus behind the “Black Lives Matter” campaign not only through personal stories but through the story of networks—both digital and human? Such stories even more difficult to sell than they are to tell. The other challenge is to find funding for films whose politics conflict with the whitewashed stories Hollywood has traditionally enshrined as “the” American narrative.

Ellen Scott is Assistant Professor of Media History at CUNY-Queens College. Her work concerns the relationship between media and the ongoing struggle for African American equality and her current book Cinema Civil Rights: Race, Repression and Regulation in the Classical Hollywood Era is now available from Rutgers University Press.

Latinos are not only the largest minority group, but also one of the fastest growing in a country that is expected to be majority-minority by 2043. Many businesses and political interests have taken notice and made a concerted effort to appeal and market to Latinos. So why has Hollywood been slow to catch up? Although our research at the Bunche Center at UCLA shows that relatively diverse TV shows excel in ratings, Latinos remain underrepresented onscreen. One underlying reason may be the belief that Latinos will continue to consume media regardless of who makes or appears in movies and TV shows. But will this reasoning (true or not) hold up as younger Latinos become savvier about their entertainment options? And, is Hollywood leaving money on the table by not appealing to Latinos’ experiences?

Growing up in Los Angeles as a daughter of Mexican and Peruvian immigrants, I know how varied and rich the Latino experience can be. From my grandmother’s journey as a single mother who worked as a housekeeper to give her kids opportunities to my life as an academic researcher advocating for social justice issues, a multitude of stories exist that are uniquely Latino yet encompass universal themes of struggle and triumph. Recent hits such as Jane the Virgin and Devious Maids show that TV audiences want to see Latino content. But not every Latino show has to be based on a Spanish-language telenovela, either.

Overall, Hollywood needs to move beyond its one-dimensional Latino character tropes. Where can I find a drama about successful Latino professionals who maintain strong ties to their families and culture? Where’s the Latino version of Parenthood or Best Man? Take a chance, Hollywood. The results may surprise you.

Dr. Ana-Christina Ramón is Assistant Director and Associate Researcher of the Ralph J. Bunche Center for African American Studies at UCLA. She currently manages the Hollywood Advancement Project that examines diversity in the entertainment industry and is the co-author (with Darnell Hunt) of the 2014 Hollywood Diversity Report and the new 2015 report.

This article was originally written for Zocalo Public Square. 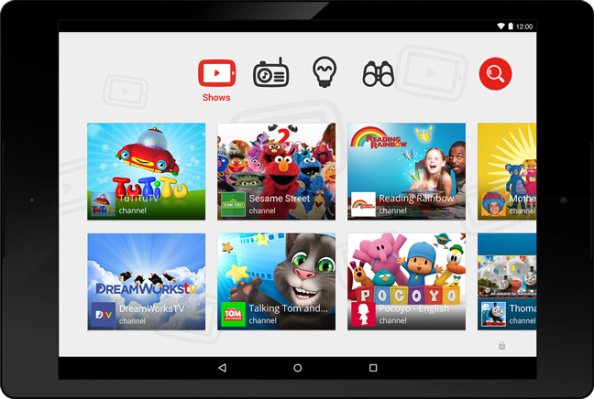 3 Ways 'YouTube Kids' Will Be Better For Your Children
Next Up: Editor's Pick