3 Ways 'YouTube Kids' Will Be Better For Your Children

If you’ve hung around kids at all in the last few years, you know they love YouTube, even though the video site is only supposed to be for people 13 and up. Now, Google is planning to roll out a YouTube app specifically aimed at kids.

The new app, which launched Monday, is the first in a suite of kid-friendly versions of Google services that the search giant is planning to launch. Here are the child and parent-friendly features of YouTube for Kids that Google has revealed thus far:

A more streamlined interface (and no comments!)

Regular YouTube has at least a dozen different channel categories across a broad variety of topics. YouTube Kids has just four: Television shows, music, educational content and exploring top videos. Comments are also stripped out of the videos, according to USA Today, and images and links are larger than on regular YouTube to make them easier for kids to tap.

When Young Americans Were TIME's Person of the Year, This Man's Face Helped Inspire a 'Portrait of a Generation'

With more than a third of children under two years old now using smartphones or tablets, it makes sense that Google is building this service for mobile devices instead of desktops. YouTube Kids is available on Android and iOS.

Parents can make sure YouTube doesn’t become a timesink by setting time limits on how long the app can be used. When the limit is reached, the user has to enter a parent-set password to reopen the app. The app will also automatically censor words like “sex,” prompting the child to input a different term.

YouTube Kids will have advertising at launch, but the commercials will be vetted by YouTube’s policy team to ensure they are family-friendly. The app won’t be tied to Google accounts, so kids’ personal information won’t be collected and stored.

See Google Doodles Through the Years

May 26, 2015 In celebration of the 64th birthday of Sally Ride, the first American woman in space.
Google

March 31, 2015 Honoring the 126th anniversary of the public opening of the Eiffel Tower.
Google

Mar. 20, 2015 To celebrate the start of spring and the vernal equinox, Google created a stop-motion animation of flowers in bloom.
Google

Nov. 12, 2014 For the landing of the Philae lander, the first spacecraft on a moving comet, Google created a gyrating lander with passing stars.
Google

May 27, 2014 For the Rachel Louise Carson doodle, the team surrounded her with birds and sea creatures to celebrate her 107th birthday.
Google

May 4 2014 For Audrey Hepburn's 85th birthday, the doodle team adapted an image from a 1956 black and white photograph taken by Yousuf Karsh.
Google

June 9, 2011 The doodlers came up with the idea of a playable logo, then pegged it to guitar innovator Les Paul's 96th birthday. Turning on composer mode allows you to create songs that you can share online.
Google

March 24, 2011 The Harry Houdini doodle was created in the style of the old posters advertising the death-defying magician.
Google

Nov. 25, 2010 Chef Ina Garten prepared this Thanksgiving feast, which Google photographed. If you clicked on a dish, her recipe appeared.
Google

Oct. 7, 2009 Scan the doodle that marks the first patent for the bar code and you'll decode Google embedded within.
Google

March 2, 2009 The doodlers arranged classic Dr. Seuss characters, like the Cat in the Hat and the Grinch, to form the logo's letters.
Google 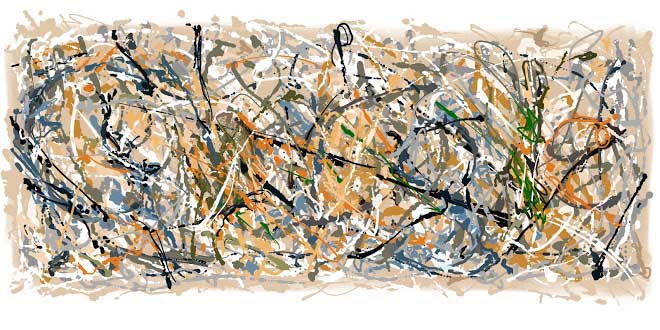 Jan. 28, 2009 There was no other way to honor abstract artist Jackson Pollack than with a chaotic drip painting.
Google

April 22, 2007 A melting iceberg for Earth Day is one of many eco-minded doodles the team has created.
Google

Jan. 4, 2006 Enter the world of out-there doodles — Google in braille. Only problem: you can't feel it.
Google 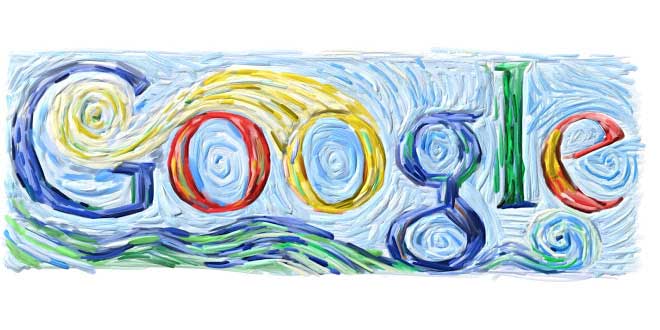 March 30, 2005 The Van Gogh doodle appeared in an era when doodles began to get more ambitious, and it's one of the doodlers' best interpretations of a specific painter.
Google 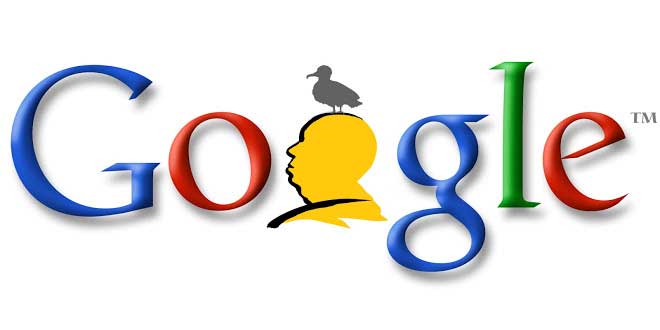 Aug. 13, 2003 Early doodles of famous folk tended to be simple, like this silhouette of Alfred Hitchcock.
Google

March 14, 2003 The early doodles were often simple but playful, like this mustachioed drawing of Albert Einstein to celebrate his birthday.
Google 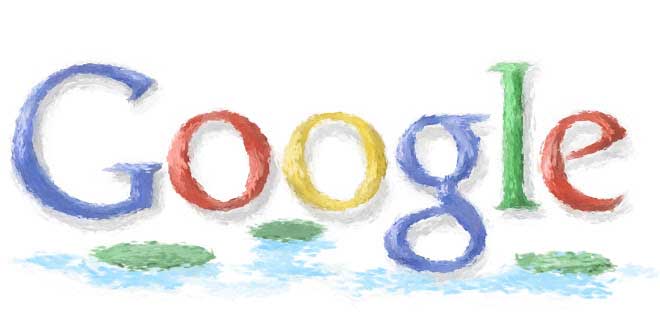 Aug. 30, 1998 When employees left for the Burning Man festival, the Google logo became a cryptic BE BACK LATER sign. "There was no master plan for doodles at that point," says doodler-in-chief Ryan Germick.
Google
1 of 24
Advertisement