7 Reasons to Love This Freezing Weather

It was 1º F in New York City on Friday—one frigging degree. That’s a keep-the-penny, why-bother, rounding error on the Fahrenheit scale. Convert it to Centigrade and it gets even worse, a brisk -17.22º, which may help explain why America never went metric.

But cold weather isn’t so bad. OK, it is, but here are seven things to like about the current deep freeze:

Criminals may be fools but they’re not stupid. If you’re going to heist a flat-screen TV or knock over a convenience store, would you rather do it when it’s 7oº and clear or when it’s 12-below and the wind chill factor is freezing your eyeballs? Crime historically drops during winter, and when it’s a brutal winter, things get even more peaceful. New York just earned applause after setting an all-time record for consecutive days without a homicide—at 12. (We do get graded on a curve.) Boston—which is just one woolly mammoth away from the next Ice Age—saw a 32% drop in larcenies, 35% in burglaries and 70% in homicides from Jan. 1 to Feb. 8, compared to the same period last year. But cold weather can increase auto thefts, thanks to what are known as puffers, cars left running in driveways while owners wait inside for them to warm up.

Maybe it’s the cuddling under blankets, or the body heat generated when you’re active, or the belief that one more day of this flipping cold and you’re going to die so you and your squeeze might as well go out happy. But whatever it is, when things freeze, humans steam. Last summer, the Pittsburgh area saw a spike in s0-called “polar vortex babies,” with increases in births of 27.8% and 15.9% at two area hospitals compared to the same period a year earlier, following a bitter stretch that occurred nine months earlier. Cold weather amorousness may also be attributable to the mere fact that it gets dark earlier in the winter—putting people in mind of nighttime activities—or that bundling up in the winter means we see less skin during the day so even a glimpse of a partner’s elbow or ankle might be enough to light the engines.

Snowmen may never be anything but round, but the rest of us can slim down naturally in cold weather. That’s mostly because of the simple business of shivering. The whole purpose of shivering is to keep you moving, which generates heat—and uses calories. The very good news is, it doesn’t even take active shivering to burn at least some fat. A phenomenon called non-shivering thermogenesis (NST) may raise your thermostat and lower your weight when it’s as warm as 64º F (17.8º C). Caveat: NST helps only so much. Waiting out winter by huddling under a blanket, binge-watching TV and hoovering up Doritos is still going to have the expected effect.

Nothing like the buzz of flies, the bite of mosquitos and the sting of bees to make summer the idyll it is—not. One of the few advantages of winter is that it’s murder on insects. All of them make provisions before the freeze hits, of course—either burrowing underground and hunkering down until spring or leaving behind a fresh clutch of eggs that can turn into a fresh swarm of bugs next summer. But if the thermometer drops far enough, those eggs may be finished too. The gypsy moth, the emerald ash borer and the pests that feed on honey locust trees all leave fewer heirs when the thermometer falls below zero. That means an easier season for the trees, and far fewer things for you to swat with a rolled up newspaper.

Alright, this one might be a stretch. Studies have absolutely, positively shown that colder temperatures activate genes that increase longevity—provided you’re a worm. Which you’re probably not. But another study shows that reducing core body temperature can increase lifespans by as much as 20%—provided you’re a mouse. Or a mussel. Still, it’s breakthroughs in animal studies that often lead to breakthroughs in human studies, so there’s reason to hope. Meantime, go mussels!

Or at least feel less. All that stuff you hear about cold weather making arthritis and other joint pain worse is true enough. But in at least one study in Finland, a plunge into icy water was found to increase norepinephrine levels in the blood as much as two- or three-fold. One of the many jobs neuropinephrine does is reduce overall pain. That’s a good thing. But plunging into icy water to get that effect? Not so much. So this one too may need a little work.

Napoleon didn’t leave a whole lot of valuable lessons behind. But one thing history’s bad boy did teach us was that on the list of truly bad ideas, attacking Russia in the winter ranks pretty much No. 1. It’s not just that wars bog down in cold weather, it’s that we tend to be less moved to fight them. Part of this is the same phenomenon that keeps crime down in the cold. Part is something much newer that was revealed in a 2011 study, which showed that higher temperatures have historically meant higher levels of armed conflict. The Cold War, it turns out, may have been an oxymoron. 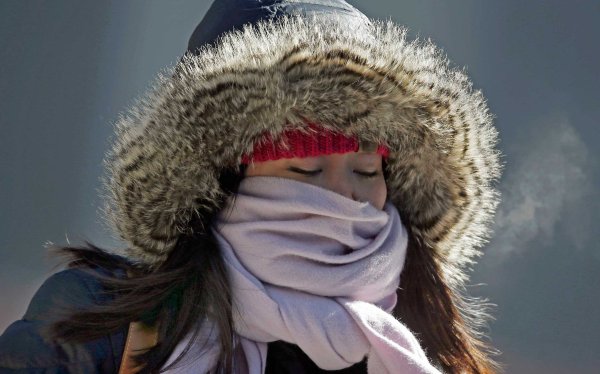 That Frozen Friday Feeling
Next Up: Editor's Pick