The newest front in the American war against the Islamic State of Iraq and Greater Syria (ISIS) will not take place in the deserts of Syria, Iraq or Libya, but on the covers of the nation’s tabloids and the airwaves of its cable television jabfests. President Obama, with two speeches in as many days, has decided to take the battle to his conservative critics.

Those who identify the black-clad extremists with their religious roots, the commander-in-chief argued repeatedly, are peddling a “lie” that will drive recruitment by the nation’s enemies and ultimately hurt U.S. interests. “These terrorists are desperate for legitimacy. And all of us have a responsibility to refute the notion that groups like ISIL somehow represent Islam, because that is a falsehood that embraces the terrorists’ narrative,” he said, using the U.S. government’s preferred acronym for ISIS, which is also known as the Islamic State.

But he did not stop there. A day after talking about the “debate in the press and among pundits” over terminology, he accused others in the public sphere Thursday of aiding the terrorist cause by highlighting the connection between Islamic teachings and Islamic State’s tactics, which include rape, beheadings, crucifixions and slavery. “That narrative sometimes extends far beyond terrorist organizations,” he continued. “That narrative becomes the foundation upon which terrorists build their ideology and by which they try to justify their violence, and that hurts all of us, including Islam and especially Muslims who are the ones most likely to be killed.”

On the other side are conservative commenters and Republican Presidential contenders, who have argued Obama has weakened the international effort to defeat the radicals by whitewashing their religious roots in public statements. “I think it’s a mistake to think that ISIS is not what it is,” said Republican presidential contender Jeb Bush, after a foreign policy address on Wednesday. “It’s violent, extreme Islamic terrorism, and the more we try to ignore that reality, the less likely it is that we’re going to develop the appropriate strategy to garner the support in the Muslim world to do what I said, which is tighten the noose and then take them out.”

Neither side shows much interest in backing down, making this a seminal moment in the Obama Administration’s long battle against the conservative press and his Republican critics. With the exception of his political campaigns and the debate over health care reform, White House aides have mostly preferred to be dismissive, not confrontational, when faced with the rhetoric of the right. But in this case, the White House has concluded that the rhetoric could have a real impact on the strength of the nation’s military foe.

Conservatives are unbowed by this claim, just a week before a major gathering in Washington of conservative leaders, where the red-meat rhetoric is certain to fly freely. A day after Obama’s first speech, the cover of the conservative New York Post photoshopped a blindfold on the President’s portrait with the headline, “Islamic terror? I just don’t see it.” Just two days earlier, Bill O’Reilly, the popular Fox News anchor, upped the temperature by declaring on his show “The Holy War is here, and unfortunately it seems the president will be the last to acknowledge it” — the exact frame that Obama argues validates the Islamic State cause.

Many of the Republicans presidential contenders have also embraced this critique of Obama’s approach to the Islamic State, even as they have offered little detail on how they would prosecute the military campaign differently. Texas Sen. Ted Cruz called Obama “an apologist for radical Islamic terrorists,” on Fox News Wednesday night.

“Everything he does is against what Christians stand for, and he’s against the Jews in Israel,” former Arkansas Gov. Mike Huckabee said earlier this month on “Fox and Friends.” “The one group of people that can know they have his undying, unfailing support would be the Muslim community. It doesn’t matter whether it’s the radical Muslim community or the more moderate Muslim community.”

Louisiana Gov. Bobby Jindal, another likely candidate for President, criticized Obama earlier this month for his choice of words. “He certainly doesn’t like to say radical Islamic,” Jindal said in another Fox News appearance. “There’s a politically correct crowd that jumps on you when you say that.” Wisconsin Gov. Scott Walker tweeted a link to a poll showing concern about Obama’s handling of the Islamic State. “We should call it what it is: radical Islamic terrorism,” Walker wrote.

Obama’s efforts to separate the ideology of extremists from the underlying teachings of Islam are a long-held strategy of the U.S. Government. In the immediate wake of the September 11, 2001, terrorist attacks, then-President George W. Bush, who used the term “Islamic extremist,” spoke repeatedly about the difference between Islam and the efforts of Al Qaeda. “These acts of violence against innocents violate the fundamental tenets of the Islamic faith, and it’s important for my fellow Americans to understand that,” Bush said, as the rubble in lower Manhattan still smoldered. “The face of terror is not the true faith of Islam. That’s not what Islam is all about. Islam is peace. These terrorists don’t represent peace. They represent evil and war.”

Some conservative and evangelical activists, however, have since rejected that formulation. In a recent email to supporters, David Lane, a Christian political organizer at the American Renewal Project, who has led trips overseas with many Republican leaders, including Rick Perry, Rand Paul, Huckabee and members of the Republican National Committee, wrote that George W. Bush was mistaken when he claimed in 2004 that Christians and Muslims worshiped the same deity. “The denial of the existence of evil, that God actually has enemies, is part of the fallout of a Biblically illiterate nation,” Lane wrote. “Our previous president was conned.” 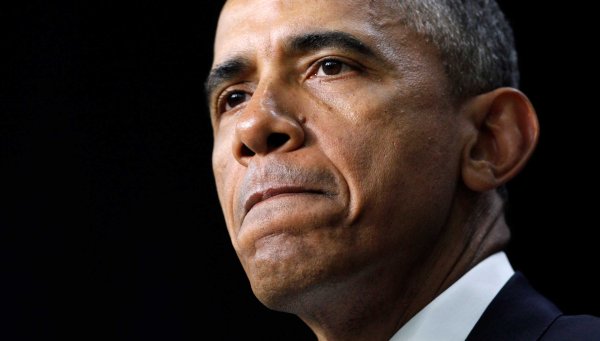 'We Are Not at War With Islam,' Obama Says
Next Up: Editor's Pick