It’s amazing what 50 years can do for a legacy.

The opening line of TIME’s 1965 remembrance of Malcolm X described the recently-assassinated human rights activist as a “pimp, a cocaine addict and a thief” whose brand had already begun a “transfiguration” after death.

Now, 50 years after the anniversary of his assassination on Feb. 21, 1965, that transfiguration continues. Malcolm X is often listed beside the likes of Martin Luther King, Jr. and Rosa Parks as an influential figure in the struggle for black equality. That’s because, though his is a complicated story of personal evolution — an evolution that continued even after his death — the lesson he offers about the importance of change has been constant throughout the decades.

During his life Malcolm X was already reinventing himself, from a troubled youth to an advocate of black separatism to a human-rights activist. Similarly, his legacy has grown after his death, from a reputation as a dangerous rabble-rouser to that of an American icon. At the heart of his new-found status is an of persistence in the face of seemingly insurmountable obstacles. These days, his belief that black lives do matter even if the world suggests otherwise, and that it’s possible to create transformation, is particularly resonant.

“Most of his career is about opposition, cynicism, pessimism, but there’s a positive side—a kind of deep self-respect and pride and sense of defiance,” explains Tommie Shelby, Harvard University professor of African and African American Studies. “That sense of spirit and militancy in the face of oppression and what looks like pretty low prospects for things getting better is what people are attracted to in him.”

Malcolm X’s autobiography, which was co-written by Alex Haley and released in the months following its namesake’s death, is at the heart of the change in public perception of him. The work careens through a life rife with drugs, crime violence and advocacy for ideas that were as controversial then as they are now. But, as Shelby notes, that’s not what lingers in the mind of the reader.

As the autobiography recounts, the author and activist, then called Malcolm Little, moved to Harlem as a young man to try to make a living and escape the tragedy of his childhood. His father had been killed in a mysterious train accident and his mother had been committed to a mental institution. Malcolm was smart, and knew it, but felt the world presented him with few options outside of crime. Without “the white man’s American social system” he and his counterparts “might have probed space, or cured cancer, or built industries,” he wrote.

This is the world Malcolm, in his own retelling of his life, defies. The way in which he challenges oppression is less significant than the act of actually doing it. Indeed, Malcolm defies the system in many ways, in rapid succession. He goes from being a child in Michigan, who strove to conform, to a devout advocate for Sunni Islam. He takes stops in between as a black separatist, a professional criminal and a pensive convict. His life is one of perpetual rebirth—and that’s still what appeals about him.

The transfiguring impact of his assassination, which had been noted by TIME, also affected the book. His story took on a whole new life, one less associated with racial separatism than with perseverance. The fact that his death was likely at the hands of assailants from the Nation of Islam—a deeply controversial organization that he had repudiated shortly before—likely provided the extra boost to make him a credible figure in the American zeitgeist.

Case in point: In the immediate years following TIME’s portrayal of Malcolm as a thief, the magazine changed course. In 1970, TIME noted that Malcolm should and would be viewed as more than “a byproduct of the rage and rhetoric” of race politics. At the turn of the century, more than three decades after he was killed, the magazine declared The Autobiography of Malcolm X one of the ten most groundbreaking books of the 20th century. Malcolm X’s had told a “haunting tale of racial persecution and rebirth” that “changed minds and lives.”

By that time, Spike Lee had released his film biopic Malcolm X, with Denzel Washington playing the title role, and Public Enemy had sampled the leader’s speeches in their music. Even figures like President Barack Obama pointed to Malcolm X’s change in approach late in life and embraced his legacy.

“His repeated acts of self-creation spoke to me; the blunt poetry of his words, his unadorned insistence on respect, promised a new and uncompromising order, martial in its discipline, forged through sheer force of will,” Obama wrote in his memoir, Dreams from My Father. Obama also noted that Malcolm had “safely abandoned” his more problematic views at the end of his life.

And, at a time when protests over racial issues continue to sweep America, Malcolm X continues to inspire. When asked about the relevance of Malcolm X today, Alicia Garza—who helped organize the #BlackLivesMatter movement—seems like she doesn’t know where to begin.

Read TIME’s 1965 report on the assassination of Malcolm X, free of charge, here in the archives: Death and Transfiguration 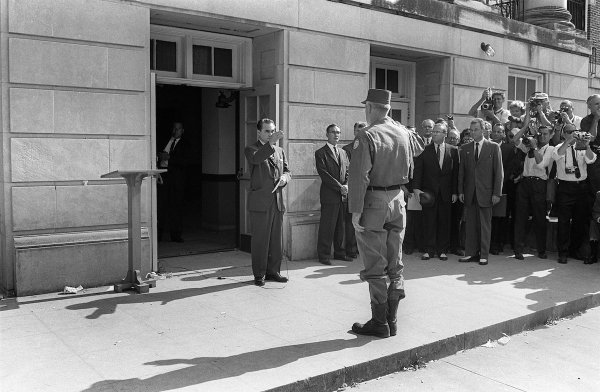 What George Wallace Tells Us About Gay Marriage in Alabama
Next Up: Editor's Pick