The novel, out in October, follows a young magician at a Hogwarts-like school named Simon Snow, and he’s already familiar to Rowell’s readers. The protagonist of 2013’s Fangirl, Cath, was obsessed with a massively popular fictional book series about the adventures of Simon Snow; parts of the fictional series, as well as Cath’s own fanfiction, appeared throughout Fangirl. TIME recently spoke to Rowell about building a fantasy world from scratch, Fifty Shades of Grey and how that Eleanor & Park movie is coming along.

TIME: So what do you call a book like this?
Rainbow Rowell: I think it’s just straight-up fiction. Some people have said, “Oh, you’re writing fanfiction for your own book!” I don’t think it’s fanfiction, I think it’s more like canon! Because even though Simon Snow is fictional inside of Fangirl, I still had to make him up. He still feels like he’s my character.

What’s it like writing your first fantasy novel?
I’ve always read so much fantasy and science fiction, but before Fangirl I didn’t think I could write fantasy. Maybe because I worked at a newspaper for so long, I didn’t feel I could let go like that. When I wrote Fangirl, writing the Simon Snow parts were my favorite parts, and they came really easily. Nobody said, “This fantasy part sucks!” So I thought, “Maybe I could do this.” My brain was ready to go there.

The characters of Simon Snow play a small part in Fangirl, but from the fanart and fanfiction created about them, they’re just as beloved as your other characters.
For people in fandom, that’s actually ideal. Sometimes the characters that people love most in fandom are characters like Draco Malfoy. You can do a lot with Draco Malfoy because there’s not much Draco Malfoy in the Harry Potter books. You get some of him, but there’s so much to fill in.

I’d imagine that building out a magical world where anything goes would be incredibly fun but also overwhelming.
Anything goes, but you also don’t want your world and your magic to be just like someone else’s. I would think, what sort of magical things are community property, that every fantasy story has? And what is too much like that book I read in sixth grade? I would get stuck and have to remind myself that I don’t really know how the magic works in my favorite fantasy stories. I don’t really know how the Force works, and when George Lucas tried to explain it to me, that was very disappointing. I get really confused if I talk specifically about the magic in Harry Potter or Lord of the Rings. I try not to get too bogged down about how it works. It’s magic! There’s no rational explanation to magic! I just tried to be consistent. When it breaks down is when you break your own rules.

Has the public perception of fandom and fanfiction changed since Fangirl came out?
It was already changing. It’s such a huge and a popular thing that I don’t think it was going to stay counter-culture and quiet. When I wrote Fangirl I had to explain what fanfiction was to a lot of people, and I don’t have to explain that much [today]. That will continue because the Harry Potter generation is growing up. The Harry Potter generation is the generation where fanfiction really became a big deal. Even if you weren’t writing fanfiction yourself, you know it’s there, you’re just much more fluent in the internet. And in its way, Fifty Shades of Grey introduced a lot of people to the concept of fanfiction, even if they got the wrong idea.

You obviously aren’t freaked out about fanfiction the way some authors are, but does something like Fifty Shades of Grey make you nervous — that someone could go in a direction you maybe wouldn’t approve of, one that could eclipse your own work?
If no one told you this is Twilight fanfiction, in my opinion, you would never know that those characters are Bella and Edward. I don’t know how Stephenie Meyer feels. Maybe she feels it’s too close. I felt like that seed had been planted pretty far away from the source material.

I don’t think ideas are as clean and separate as we think they are. Everything is derivative in a way. What you write is often a reaction or a response to the things you’ve read. I’ve read fantasy my whole life, so when I first sat down to write a fantasy novel, I was responding to all of these concepts of what it meant to be the chosen one, what it meant to have the gift and responsibility of magic. Definitely there is fanfiction that takes my characters in a direction that I wouldn’t intend for them — almost all fanfiction. They’re taking it away from the path that I’ve charted. It doesn’t really bother me.

Did you see Jonathan Franzen’s comments last week about young-adult fiction being “moral simplicity”? What did you think?
I didn’t see his quote, so I hate to respond to a quote that I didn’t see, but it’s a common thing to say. If he said that, he’s not alone in saying that. I don’t think people would be saying that if YA wasn’t popular right now. A lot of people look at something popular, and they’re dismissive of it because they don’t understand it. If you think YA is simple, you probably haven’t read a lot of it. But YA is not a genre. It’s just this really loosely defined category of books. If YA had always been this popular category, a lot of books we think of as classics would be YA. The Catcher in the Rye? Without question. Also, I don’t know that people just read YA. So I don’t know what he says, but I’m familiar with the argument.

How is writing the screenplay for Eleanor & Park?
I have finished a first draft, and DreamWorks is talking to a possible director.

Does adapting your own book feel like doing surgery on your own children, as I’ve heard one author describe it?
It felt more like trying to like transmogrify a dog into a cat and keeping it alive. I think it would be easier to adapt someone else’s novel or write a screenplay from scratch. It was difficult, and I’m sure it will continue to change. It’s just like learning how to do it on the job. Eleanor and Park is a tricky book because almost everything happens internally. There’s a lot unsaid. I had to figure out how to show it in the screenplay, but whoever directs the film will ultimately make those decisions. A movie belongs to a director much more to a screenwriter.

Will you be on set and involved in casting in the way John Green is with the movie versions of his books?
That really depends on the movie company and the director and how involved they want me to be. It’s someone else’s party. There are some directors who find the author really helpful, and there are others who are like, “I need to stay fresh and do my own thing.” Which I would understand because the director of the film has a completely different job. So I’m for it, I’d love to be involved. What I want is a director who really can make it happen. I want that more than I want to be involved. 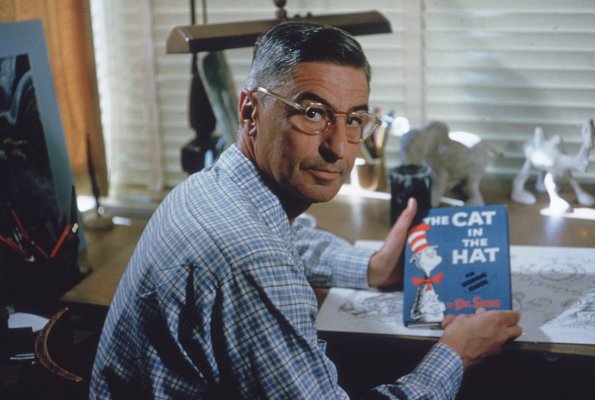 Celebrate the New Dr. Seuss Book With a New Fact About the Author
Next Up: Editor's Pick