Now That Jupiter Has Descended, What's Next for the Wachowskis?

Even before its box office debut earlier this month, critics and industry observers were quick to sound the death knell for Jupiter Ascending, the latest high-budget science fiction offering from siblings Andy and Lana Wachowski. Speculation became reality when the film opened to a paltry $18 million, with Variety calling it the “biggest flop of the year.” Critics were quick to dub the film “Jupiter Descending.”

This isn’t the first time Warner Brothers has invested in a high-octane Wachowski flop. 2008’s Speed Racer lost around $26 million at the box office, while their most recent undertaking, the ambitious Cloud Atlas (2012), received only shaky promotion from the studio before debuting to lukewarm success, ultimately netting a $28.4 million profit on a $102 million budget.

For those keeping score, the Wachowskis are still big winners. Their smash hit The Matrix launched a film trilogy, TV show and video game franchise that grossed the studio over $1.5 billion, and they wrote the screenplay for the commercially and critically successful V for Vendetta in 2006.

But in a period where superhero adaptations, sequels and remakes of sci-fi classics rule the industry, this latest failure has some critics questioning if the pair’s signature style is still marketable. Jupiter Ascending was their first original sci-fi since The Matrix, and its poor performance begs two questions: First, what went wrong; second, what’s next?

The road to Jupiter’s premiere was notoriously rocky, involving a delayed release date and a brutal reception at Sundance. By the time it debuted on the big screen, it was marred by its negative buzz. And the story of the space odyssey was, for better or worse, a variation on the same theme the Wachowskis explored in The Matrix. In the famous 1999 sci-fi, a man is ripped from the mundane world he knows when he learns it’s all an elaborate dream created by intelligent machines, who keep humans in hibernation—their minds trapped in the titular Matrix—while the machines feed on their energy for power. Jupiter tackles the same motif in a new way, to different narrative ends. Mila Kunis’ Jupiter Jones is drawn out of her own prosaic life to learn that the Earth is only a small piece of a much greater universe ruled by more advanced humans, who will eventually harvest the people of Earth to generate a substance that can keep them alive forever.

The film had the no-holds-barred action that characterizes the Wachowski brand, and the effects were every bit as glossy and cutting edge as audiences and critics have come to expect. But this time, despite all the similarities to the wildly successful Matrix, as well as a star-studded cast, it was panned by both critics and moviegoers. The Matrix currently has an 87% fresh rating on the review aggregator Rotten Tomatoes; Jupiter Ascending has 22%.

In interviews, the Wachowskis have chalked the negative reception up to viewers’ desire for “safety,” as exemplified by the proliferation of sequels and remakes. This spring, that theory will be put to the test when the brother and sister duo will debut their first foray into a medium that’s now characterized by innovation: television. More specifically, Netflix.

The complexity and ambition of their upcoming series, Sense8, appears to live up to the Wachowski reputation. According to statements from Netflix, the show is about eight strangers across the globe who become psychically and empathically linked, and then must unite against a mysterious force (named Mr. Whispers) seeking to destroy them. The siblings shot on location for every different storyline, logging 100,000 airline miles last year, according to Andy, as they filmed in San Francisco, Chicago, Mexico City, Reykjavík, London, Berlin, Nairobi, Seoul and Mumbai. They put together a cast loaded with international stars who may still be largely unknown to Western audiences, including Mexican telenovela star Alfonso Herrera and Bollywood titan Anupam Kher, who American viewers will recognize as Bradley Cooper’s psychiatrist, Dr. Patel, in Silver Linings Playbook.

According to the duo and Sense8‘s co-creator, J. Michael Straczynski, Netflix is in full support of the team’s vision. Straczynski told Comic Book Resources in 2013 that Netflix signed on to the show only hours after the creators made their first pitch.

The enthusiastic support of the Internet streaming giant is a major boon for the Wachowskis, and it draws a clean line between the current priorities of film and TV. Observers have criticized Warner Brothers for years for giving the siblings too much leeway to explore imaginative, convoluted plots. But modern television, with its unlimited possibilities for original content, is thriving on innovation and risk. Netflix’s green light may be just the turn-around the Wachowskis need to revitalize their brand. 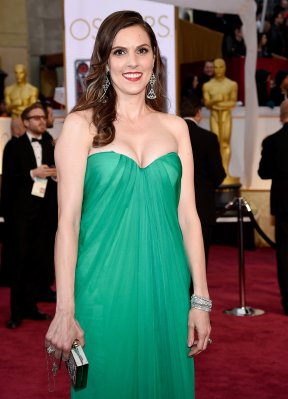 See What Chris Kyle's Widow Brought to the Oscars
Next Up: Editor's Pick