If the Roy Rogers fast food franchise is known for anything, it’s the signature “Fixin’s Bar,” where diners customize sandwiches with pickles, onions, lettuce, and condiments. Now the Bar is full of whipped cream, syrups, and other toppings, available with an all-you-can-eat pancake deal for just $1.99.

There were once roughly 650 Roy Rogers restaurants in the U.S., most located in the Mid-Atlantic states. In the 1990s, though, the Marriott-owned chain was sold to fast-food rival Hardee’s, and over the years the vast majority of restaurant locations were resold and converted into other brands, including McDonald’s, Boston Market, and Wendy’s. Today, there are 50 Roy Rogers locations concentrated in the corridor between Virginia and upstate New York, up from a low of around a dozen in the late ’90s.

The company, under new ownership, has ambitions to open up as many as 100 new Roy Rogers locations over the next five or so years. In light of a new promotion, it’s clear that one way the company hopes to grow is by attracting more customers into restaurants earlier in the day.

Subway, Taco Bell, and many other fast food chains have rolled out new menu items and launched the gamut of promotions to juice sales during normally slow times—breakfast in particular. Now, a Roy Rogers breakfast deal is available at shockingly low price, and it plays up the brand’s Fixin’s Bar to boot.

(MORE: Fast Food Wants You to Eat More Than the Usual Breakfast, Lunch, and Dinner)

Now, participating Roy Rogers’ Fixin’s Bars will “feature an ultimate pancake garnish station complete with whipped cream, sprinkles and an assortment of syrup choices including chocolate, blueberry and, of course, classic pancake syrup,” according to a company release. Customers are welcomed to buttermilk pancakes and a choice of toppings on an all-you-can-eat basis for a measly $1.99, during normal breakfast hours on Saturdays and Sundays through May 25 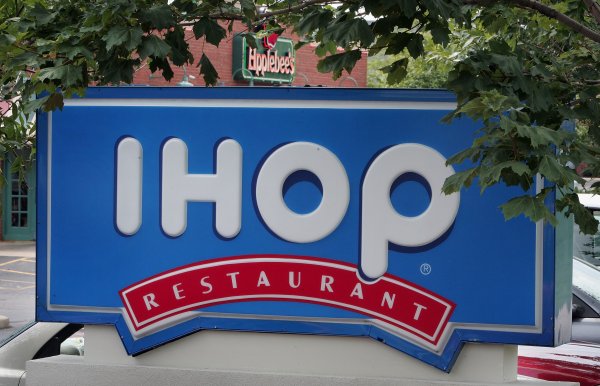