Josh Radnor: 'People Who Stuck With the Series' Understood the How I Met Your Mother Finale

Having met and bid farewell to the Mother, Josh Radnor is set on reinventing himself.

Since October, Radnor has been starring in Disgraced, a Broadway play that won the Pulitzer Prize for Drama. It’s about the degree to which a Muslim-American lawyer (Hari Dhillon) is able to outrun the stereotypes associated with his religion, provoked by the interrogations of his dinner guests, including an art dealer (Radnor)—and in the frankness with which it addresses issues of race and religion, it’s a far cry from Radnor’s last big role. On nine seasons of How I Met Your Mother, Radnor, playing Ted, pined for love winningly, a journey Radnor is now ready to push back against. The actor told TIME: “Sometimes if I’m doing something lighter as an actor, I want to find something heavier.”

Not that Mother was so simplistic. There was plenty of heaviness in the controversial finale, which aired last March. That episode revealed that the Mother, the character audiences had been waiting for years to meet and who had developed in her brief time onscreen real chemistry with Ted, had been dead throughout the series-long narration. A year on, Radnor is sanguine about the controversy: “Various arts are littered with stories of things being greeted with outrage that go on to find their place and be looked on in a different way.” As for Disgraced (playing at New York’s Lyceum Theatre through March 1), there’s been little but praise. It’s a story about how Radnor met with acclaim that he’s only too happy to narrate.

TIME: What went into the decision to act on Broadway now, coming off the momentum of How I Met Your Mother’s finale last year?

Josh Radnor: I did a couple of plays over the years during our summer months off on the show. If I don’t do a play for a while, I miss it a lot. I didn’t have an overarching plan about coming back to Broadway, but I admired the novel [Ayad Akhtar, the playwright] wrote and we became friends. Last April, the show had ended a month earlier, and he told me I had an offer to do it on Broadway. It doesn’t take you long to say yes to something like that, to work with a friend on something amazing on Broadway—a play that feels culturally relevant, everything I wanted to do on Broadway. I’d be a fool not to do it.

Talk about that relevance: Has it been complicated for you to perform in a play about anti-Muslim prejudice given all that’s happened in the world since the run began?

It speaks to two things: This ongoing tragedy that unspools across the front page of paper every day. The play is set in 2011, and he was working on it for years before. It also speaks to Ayad’s prescience as a writer, being slightly ahead of the story, being able to take these issues on. It was a very strange day when the Charlie Hebdo [killings] happened in France, and we have a line about the French banning the veil and their problem with Islam. I remember thinking Oh man, there’s those lines about France, people will think they added this in. But [that] was in there from the start; he just had his finger on the pulse.

Did you worry about this play taking a toll on your reputation as someone who was a part of a fun, sunny comedy? Did you think it’d offend fans in a way that’d cause you problems?

No, that’s not something that really crossed my mind. I value the opportunity to participate in something that feels provocative. It’s not recklessly provocative, it’s not sensationalistic—it’s exploring the deepest questions of identity and tribalism. And to me, sometimes if I’m doing something lighter as an actor, I want to find something heavier. I’m doing She Loves Me next season so that’ll be lighter; I like to have a mix of things.

It’s gratifying to me because the guy I’m playing is nothing like the guy I played on TV for so long. An actor’s career is about demolishing that—fighting to get people to see you in a different way. Some people have a very crystallized idea of me as an actor. I was always clear, on How I Met Your Mother, that I was playing a character. In this show, I’m playing a totally different character. If you came to see some version or riff on what I did on TV, you’re gonna be disappointed. One guy wrote me on Twitter, asking: Why weren’t you in the show, and why didn’t they make an announcement? And I was! He just wasn’t wearing his glasses. I took it as a total compliment. I feel like this guy is different from me and from the guy I played on the show. I’ve enjoyed flexing those muscles.

Which is more punishing: Acting on Broadway, or taping a TV show?

I don’t know that I could describe the pace of the TV show as punishing. It was quite a civilized schedule. We had one week off a month, a four-month break each year, and shot three days a week. We only shot nine days a month. It was great for people who were having families, or for me and Jason [Segel], who were creating our own projects. It’s certainly different doing eight shows a week. There’s something fascinating about it as an actor. You have to fight being mechanical and listen to keep it fresh. You can fall into thinking, “This is my performance,” rather than living it. There are days that have a Groundhog Day feeling. There are days we look at each other and say I can’t believe I’m still doing this play! But it’s the audience’s first time hearing it. With eight shows a week, no matter what you do—this play’s only 85 minutes, so it’s more merciful, but you do have to let your whole day coalesce around it.

A year or so on, how do you think the How I Met Your Mother finale aged? A lot of longtime fans were angry at the time with the revelation that “The Mother” died of a terminal illness.

I think the series and the finale are going to age pretty well, that’s my sense. Various arts are littered with stories of things being greeted with outrage that go on to find their place and be looked on in a different way. I think some of that outrage spoke to how passionately people felt about it. With television series, people really feel a sense of ownership. They spend hours with it, intimate hours, in their pajamas, when they’re sick—I loved hearing from fans how the show had brightened their day in the midst of tough times. If you really look at the DNA of the show from the beginning, it was always about really tough stuff. Some weeks, it was a really broad comedy, and some weeks, it made you cry. We never shied away from the fact that death exists and that you don’t always get what you want. It wasn’t a fantasy, it always had real life intruding.

[Show creators] Carter [Bays] and Craig [Thomas], this was their plan from the beginning, and no one objected. When I read the finale script, I thought it was a beautiful, poignant way to say goodbye to these characters. I was a fan, and I think that a lot of people who stuck with the series from day one really got it. The people who didn’t—I hope this isn’t offensive—a lot of the young fans were offended by it. They were more upset with the idea of death than anything. There’s a book I hold up in Disgraced called The Denial of Death. It’s about the idea we’re living our lives oriented around trying to deny death at every turn. I don’t know that that’s the healthiest way to live: We hide old people, we don’t want to see sick people. I don’t know we have a healthy relationship with mortality. People got upset! But if you look at, thematically, what they were going for, there’s some beautiful stuff there.

Are you planning to direct more feature films in the future?

Yes, but I can’t talk about what’s in the works: It’s partly superstition — partly I just can’t. Discovering the directing thing while I was on the show was really important for me and opened up avenues for ways to tell stories.

Your How I Met Your Mother co-star, Neil Patrick Harris, was recently on Broadway in Hedwig and the Angry Inch and is set to host the Oscars. Do you two exchange tips on performing live?

The last time I saw Neil was when I saw Hedwig. I haven’t heard from him since then, but I’m excited to watch him! As for tips: We trust each other to do our thing.

Read next: Darren Criss Will Return to Broadway as the Next Hedwig 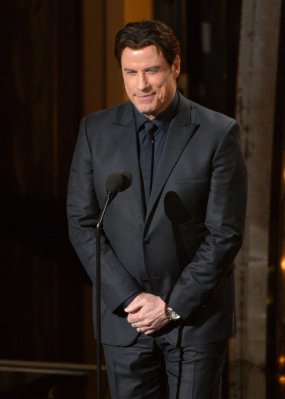 Here's Why John Travolta Will Save This Year's Oscars
Next Up: Editor's Pick