Taking Medication May Make It Easier to Quit Smoking

According to the results of a new trial published in JAMA, an anti-smoking medication may make it easier for smokers who aren’t yet ready to quit to do so later on.

Nearly seven out of every 10 current U.S. adult cigarette smokers want to quit completely, according to data from the Centers for Disease Control and Prevention. But some smokers who aren’t yet ready to quit for good want to lower their consumption and increase their chances for success at kicking the habit down the line. That’s possible with the help of a drug called varenicline, which is sold under the trade name Chantix and is manufactured by Pfizer, finds the new study, which was also funded by Pfizer.

The researchers conducted a two-year trial with 1,510 cigarette smokers who weren’t willing to quit within the next month, but who were willing to try to quit within the following three months. The men and women were split into two groups: some received Chantix, and others received a placebo for 24 weeks. The goal for all the volunteers was to reduce smoking by at least 50% by week four, and then continue to ease up on the habit until a quit attempt at week 12.

The volunteers who were taking Chantix were significantly more successful at quitting by the end of the study compared to the people on the placebo, and the effect stuck at one year.

Developing smoking cessation strategies that allow smokers to quit gradually could attract many more smokers to the method, a Pfizer spokesperson said in an e-mail.

The authors disclose several conflicts of interest, including the fact that Chantix manufacturer Pfizer was involved in the design, data collection and analysis of the study, and many of the study authors received fees or grants from Pfizer. However, the findings highlight a new potential strategy for curbing smoking and possibly allowing more people to be successful. According to the American Cancer Society, only around 4% to 7% of people are able to quit smoking without medication or other means, and about 25% are able to quit smoking for over six months with the help of medicine. 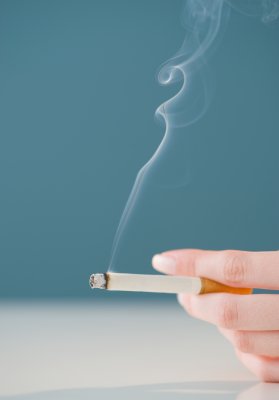