Review: CBS's The Odd Couple Is a Revival Without a Reason

A reboot? That seems too lofty for a sitcom that doesn’t really do much tinkering with the 1970-75 comedy, based on the 1965 Neil Simon play (by way of a 1968 movie), beyond updating the technology and some of the pop-culture references. A reimagining? There have been too many variations on the “opposites forced to live together” theme over the decades for that to count–currently, for instance, CBS’s Two Broke Girls, not to mention Two and a Half Men, the bitter-single-guys sitcom before whose finale this bitter-single-guys sitcom premieres (Thursday, 8:30 p.m. ET).

This Odd Couple is really something more like a revival–in the Broadway sense of staging a nostalgic reproduction of a show like Guys and Dolls: come see the stars of today singing your beloved favorites of yesteryear! The characters are the same. The premise is the same. The theme song is essentially the same. (If anything, the new version feels somehow more retro than the original, played over a Saul Bass-like title sequence.) Many of the gags play as if unearthed from a time capsule (there’s a bookie joke in the first minute of the pilot). The unimaginative result is less a sitcom than a cover band performance, mostly competent but entirely unnecessary.

The casting, at least, is right. Matthew Perry fits right into the lived-in clothing of Jack Klugman’s Oscar Madison, now upgraded from sportswriter to a sports-radio jock, broadcasting from his slovenly post-divorce pad, complete with long-suffering assistant (Yvette Nicole Brown) and a video all with a sports ticker. But it’s Thomas Lennon who is the inspired choice as the new Felix Unger. who shows up–nasal honking and all–on Oscar’s threshold after a breakup with his wife. Lennon plays Felix’s raw loneliness and crisp fussiness without ever seeming like he’s doing a Tony Randall impression (those nasal sounds notwithstanding).

The new pilot plays out as you’d expect; Felix upends Oscar’s comfortable pantsless life, Oscar comes to see that he may need Felix more than he suspects. But there’s a sourness to the whole enterprise, partly because of the script’s Unfrozen Caveman Bachelor sensibility. There was at least something mildly of-the-moment about the original sitcom in the early ’70s: two casualties of the divorce era, reassessing their place in a post-Ward-and-June-Cleaver world. But now this show just seems clunkily updated, yet distractingly more dated than the series it remakes.

This is, in 2015, a sitcom built on jokes about how a fastidious man who cooks must be gay, in which Oscar hosts a poker night for his married buddies who commiserate about the emasculating ball-and-chains they have to go home to. (One, played by Dave Foley–so much great talent wasted here!–answers a question about his health habits with, “You’ve met my wife. Why would I want to live longer?”) When the pilot introduces a female supporting character into this den of Old Spice and misery, it’s eccentric sad-sack neighbor Emily (Lindsay Sloane), who we’re supposed to accept is the insecure ugly-duckling sister to Casey (guest star Leslie Bibb) because–I don’t know, she’s a brunette or something.

Who is this new Odd Couple for, exactly? To fans of Two and a Half Men not versed in the original, it will probably just seem like a stodgier version of the same concept. Other viewers may love the terrific cast members from their earlier work, but shows like CBS’s The Millers–and pretty much Matthew Perry’s entire post-Friends career–prove that that affection will only get you so far. And viewers who loved the original series can surely get their grandkids to show them how to stream the archives on Hulu. Call it re-creation or reboot, rerun or retread, the first episode of The Odd Couple offers little reason to return. 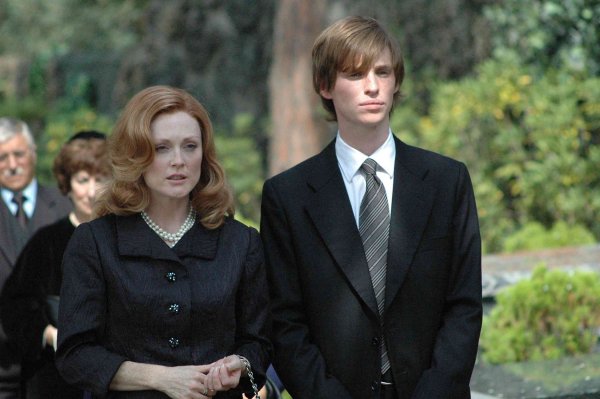 Watch Julianne Moore and Eddie Redmayne Play a Creepy Mother and Son in This Forgotten Film
Next Up: Editor's Pick