Welcome back to The Bachelor. Last night, while some of us were watching Bradley Cooper make out with Betty White, Saturday Night Live’s 40th anniversary special, Chris Soules was making out with lots of ladies and having a heart-to-heart talk with Megan. He decided that it wasn’t worth bringing her to Iowa, which is pretty harsh, if you think about it. The rest of the women got to travel to Chris’ hometown to see what their future could hold. Most were not impressed with the shutdown town, but Britt was really, really not impressed and couldn’t fake it. She tried, but Carly called her out on it to Chris. Then Britt finally realized that “her boyfriend” was dating six other women and that was not O.K. with her. She had a mini-meltdown when Chris gave Kaitlyn a date rose, and Chris finally got to see the Britt that Carly had warned him about. The show ended with him thinking about what he really wanted out of a wife and the show.

First Date: While Chris is still reeling from his conversation with Britt, he wants to clear his head and focus on Becca. They wander through the streets of some Iowan urban hotspot. “It’s not Italy or Belgium,” explains Chris, perhaps mistaking Becca for Megan, who wasn’t positive that New Mexico was in the U.S. Then they retire to his “loft,” where Becca tells Chris that she has never been in love before, even though she dated her ex for four years. Chris shrugs and asks her if she wants to go “watch the sunset,” which is a pretty good line. They make out as the sun sets and it looks like the cover of a Harlequin Romance.

The Drama, Part One: Britt announces to the women that she has packed her stuff and is going to leave before the Rose Ceremony. She starts crying as she explains that she told Chris she wanted to be his wife and could see a life together and Chris gave the rose to someone else. It’s like she just realized the entire point of this show. Carly throws Britt a professional-grade eye roll.

The Rose Ceremony, Part One: Jade needs to tell Chris that she did some nude modeling (scamper off and Google that if you must, but come right back) because she’s not bringing him home to meet her family if he’s not into his possible fiancée being a Playboy model. Britt needs to tell Chris that she’s leaving, because her heart isn’t in it, because she doesn’t think his heart is in it (scamper off and parse that if you must, but come right back). With all these Very Important Conversations needing to be had, Chris (a.k.a. the producers) cancel the cocktail party and head straight into the Rose Ceremony.

The Bachelor Watch: Battle in the Badlands

The Drama, Part Two: The women line up like suspects and Chris files in to name the culprit, but before he can get a word out, Britt demands a private audience. The women give her a collective eye roll and try to guess her play (consensus: she wants him to beg her to stay). Britt apologizes to Chris for her Arlington-bashing behavior, but Chris seems to have already made his decision. While Britt wants to talk about feelings and stuff, Chris tells her that Carly bad-mouthed her and he loved that Carly did that. Then he sends her home for not displaying properly wifely behavior. Britt ugly cries (well, as ugly as she is capable of) in the front yard, but not over Chris, but because of Carly’s betrayal.

The Rose Ceremony, Part Two: Reunited with the remaining women, Chris thanked his anonymous sources (Carly) for stabbing Britt in the back. He is on this journey to find a life partner and for him that means someone who loves Iowa or at least is really good at lying about it. Kaitlyn already has her rose, so Chris gives the first rose to Whitney, followed by Becca. The final rose goes to Jade, which is fine, but also hilarious considering the fact that he just thanked Carly for her intel on Britt. Carly uses her long ride back to the airport to question everything about herself and wallow in self-pity. It’s a long drive.

The Final Four: Chris is going to visit the hometowns of a veritable Whitman’s Sampler of women including a Playboy model, a virgin, a fertility nurse and a dance instructor.

Becca’s Hometown Date: Chris goes to meet Becca in her hometown in Louisiana. Becca admits to Chris that she has never brought a guy home before. Once they arrive at the family homestead, her sister sits Chris down for a chat about the fact that Becca “has never had the urge” to be with a man, that she’s “not an intimate person.” Becca’s mom tells him that she has some concerns too, and while Chris should start to see giant red flags flapping over Becca’s head, instead he hopes that he can be the man Becca has been waiting for. Becca’s sister then pulls Becca aside for some real talk and points out that she’s getting ever closer to the Fantasy Suite, and maybe she should tell Chris that she’s a virgin? Becca thinks the Fantasy Suite would be a great time to tell him she’s a virgin, presumably because then he can’t dump her without looking like a jerk. Then she makes out with him in a ferris wheel and proves all the haters wrong, because she can be intimate with a man in public.

Whitney’s Hometown Date: The second Chris arrives in Chicago, Whitney asks him if he wants to go make a baby. Really. Someone’s child could have been a prop on The Bachelor. So jealous. Whitney takes him to her fertility office and gives him the grand tour, including making an embryo. Chris notes, “I make corn,” which may be the best line ever on the show. Whitney and her boss discuss collecting a sample from Chris and then there is more conversation about sperm than one would have thought allowed on a Disney/ABC property. Chris loves that Whitney loves her job and is so excited to bring her to Arlington, Iowa, where they have no fertility clinic, and she will have to make her own babies. Whitney was raised by a single mother who has since passed away, so Chris meets her uncle, sister and grandmother. Chris wants to ask Whitney’s sister’s blessing for marriage, but she won’t do it. She wants whoever marries her little sister to know that she’s the one. She tells Chris to call her when he knows. Respect. Later, Whitney tells Chris that she has fallen in love with him. Chris kisses her, of course, because that is his response to every situation.

Kaitlyn’s Hometown Date: While Kaitlyn is actually as Canadian as Alan Thicke, her family winters in Arizona. So Chris flies to Phoenix, and Kaitlyn shoves him in a recording studio to make a rap song. It’s as bad as you think. Then Chris goes to meet Kaitlyn’s divorced parents, their new spouses and her brother, which is way less awkward of a dinner party that you would expect. Kaitlyn makes her mother stare into her eyes until she knows whether Kaitlyn is in love and her mother determines that she is. Then Kaitlyn takes Chris to a dark street and unveils a billboard that reads “Kaitlyn <3 Chris.” He kisses her, because, of course.

Jade’s Hometown Date: Chris has long held on to the belief that despite the fact that Jade lives in L.A., she could survive in Arlington, because she grew up in Gehring, Neb. As soon as they arrive in town, Chris goes to have a man-to-man talk with Jade’s father in the shadow of his well-stocked gun locker. Chris eventually wins his grudging approval, so long as Chris promises to accept Jade for who she is. Jade’s brother points out that she is a “wild mustang” who fled Nebraska and hasn’t looked back. Chris shrugs. Then Jade and her dad cry on the couch. Chris and Jade head to his hotel, and that’s when Jade decides to tell him she posed for Playboy. She softens the blow by showing him the pictures. She asks him if he wants to see them and he looks around like, is this a trap?, and tries to figure out how to answer that question on ABC. He surprisingly gracefully says it’s about her, and her comfort level. She whips out the laptop and shows all the pictures. Chris is then put in the awkward position of watching porn on primetime television. He handles it well enough, muttering something about respecting her and not judging her for her past. Then they make out.

The Rose Ceremony: Whitney got the all-important first rose a.k.a. the frontrunner rose. Kaitlyn got the second rose, leaving Jade and Becca vying for the final rose. Would he pick the woman with intimacy issues or the one without? He chose Becca. It’s not entirely clear that he passed on Jade because of her past, because she really hasn’t opened up much during the process, until she, you know, opened up everything. Chris takes her outside and assures her it has nothing to do with her photos, but explains that things just went faster with some of the other girls. Chris tries not to cry in the lobby of the hotel as Jade leaves, wondering if he made a mistake. Um, Chris? You let a Playboy model and identified “wild mustang” leave before Fantasy Suite night. Obviously you are making a mistake.

Best Reason to Come Back Next Week: Fantasy Suites in Bali! 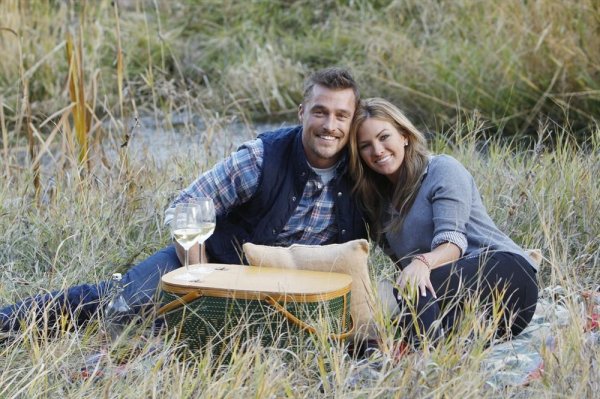