Relatives of Egyptian Coptic Christians purportedly killed by ISIS militants in Libya react after hearing the news on Feb. 16, 2015, in the village of Al-Awar in Egypt's southern province of Minya
Mohamed El-Shahed—AFP/Getty Images
By Jared Malsin/Cairo

The executioner speaks in English and points his knife toward the Mediterranean. “We will conquer Rome, by Allah’s permission,” he says.

The video released by the Islamic State of Iraq and Greater Syria (ISIS) on Sunday showing the killings of 21 Egyptian Christian workers, appeared to be directed at the Christian world, the continent of Europe and gloried in its brutality.

It was filmed in Libya on the shores of the Mediterranean Sea. The video made no reference to the other powers in Libya’s civil war, in which both of the country’s rival governments claim to be combating ISIS.

Unlike the statements of other Islamist groups in the region, the video also made no mention of the Egyptian state, which has cracked down on political Islam since the removal of elected President Mohamed Morsi in 2013. Egypt’s government is also participating in the fight against Islamists in Libya.

Instead, the five-minute film is concerned with more international themes. The targets are not modern states, but rather “Rome” and Christians, who are labeled “the people of the cross, the followers of the hostile Egyptian Church.” The message was phrased in religious terms intended to transcend national boundaries. The video ends with the Mediterranean waves dyed red from the blood of the murdered men.

The spectacular appearance of ISIS on the Mediterranean’s southern shores alarmed European governments. Italy’s Interior Minister Angelino Alfano called for NATO to intervene in Libya. “ISIS is at the door,” he was quoted as saying. “There is no time to waste.” If the country’s conflict is not resolved soon, U.K. special envoy Jonathan Powell declared, Libya risks becoming “Somalia on the Mediterranean.”

In response to the murders, Egypt launched air strikes against what it said were ISIS positions in eastern Libya on Monday. It was the first time Egypt acknowledged military operations in Libya, although the government has secretly backed the internationally recognized government in Libya’s civil conflict since last year.

But in spite of ISIS’ self-aggrandizing rhetoric, experts say the best solution is the formation of a unified Libyan government rather than international intervention. “You will not be able to effectively solve the counterterrorism problem, which may involve some external support, without addressing the political conflict,” says Issandr El Amrani, director of International Crisis Group’s North Africa Project.

“Both sides in the political conflict are against ISIS,” he says. “It’s a common problem. The thing is, they’re not going to focus on doing that, all these various militias in both camps, if they’re too busy fighting each other.”

El Amrani says calls for NATO, European, or U.S. intervention were unlikely to result in a large-scale intervention. “There’s not a lot of countries that are very excited about spending more resources on a new military adventure in Libya. Its footprint is likely to be very modest,” he says.

Bill Quandt, a former member of the U.S. National Security Council and professor emeritus in the Department of Politics at the University of Virginia, argues that Western options in Libya are limited. “After all we’ve been carrying out air strikes every day in Syria and Iraq and it’s hard to say how much difference it’s making.”

“Iraq and Syria are different in that there are geostrategic stakes involved, particularly with Iraq,” he says. “We’ve invested so heavily there that there’s a sense of sunk costs that we can’t let it totally go down the drain. I don’t think there is that feeling about Libya.” 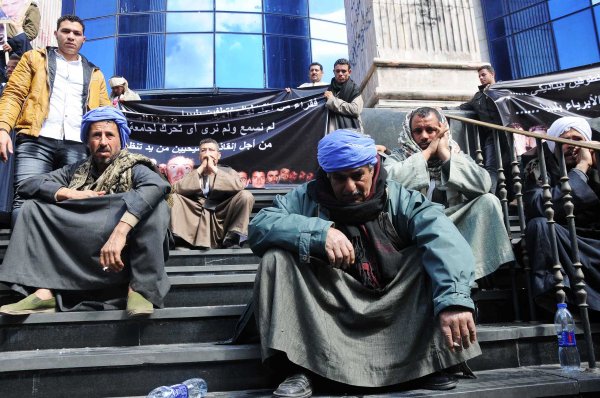 Shadow of ISIS Falls on Libya
Next Up: Editor's Pick