Why the Washington Monument Has 'Shrunk' By 10 Inches

The Washington Monument now stands 10 inches shorter than when it was completed in 1884, or at least that’s what a new government measurement announced Monday suggests.

The National Oceanic and Atmospheric Administration (NOAA) used new technology to calculate the monument’s height at 554 feet 7 and 11/32 inches. But in 1884, the towering obelisk was measured at 555 feet 5⅛ inches.

What’s behind the incredible shrinking monument? A difference in the way the measurement was conducted likely accounts for most of the difference, according to NOAA. Engineers today used international standards to measure from the “lowest, significant, open-air, pedestrian entrance” to the structure’s peak. It’s unclear what standard engineers used when the monument was first built.

“We have to be cautious in comparing this new height to the historic one, since we do not know precisely the actual starting point that U.S. Army Corps of Engineers Lt. Col. Thomas Casey used in 1884,” said Dru Smith, a NOAA scientist. “Today’s elevation reflects the international standards for measurement of a building’s height as well as considerable technological improvements.”

The change in height not due to the difference in measurement standards is likely three-eighths of an inch, according to a report in the Washington Post. That change is likely due to wear and tear to the monument’s cap. 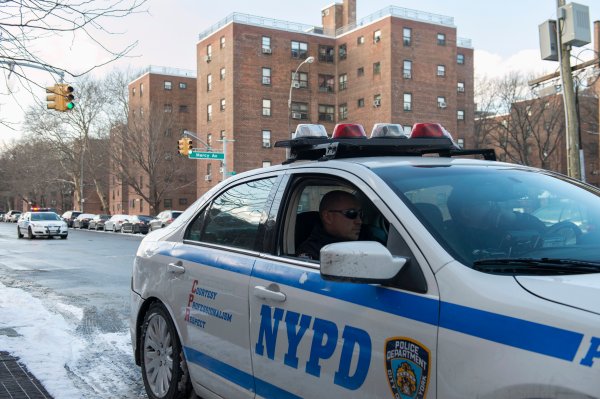 Big Apple Goes 12 Days Without a Murder
Next Up: Editor's Pick