Jerry Seinfeld showed up at the Saturday Night Live anniversary to host a Q&A session with the audience. But before he took a single question he delivered a zinger at the expense of NBC News host Brian Williams, noting that Williams had told him that he hosted the show back in the ’70s. (Seinfeld wasn’t the only one to target Williams, either. Earlier, Jim Carrey made it awkward on the red carpet by asking Matt Lauer about Williams.)

Seinfeld then took some questions from the celebrity-packed audience, which may rival the Golden Globes or Academy Awards when it comes to stars-per-square-foot, packed as it was with former hosts, musical guests, past cast members and friends of the show. First, Michael Douglas wanted to know why he, Hollywood royalty and a self-titled “sexual icon,” had only been asked to host the show once. Seinfeld did his best to explain that people who hosted a lot were always available and “pathetic,” which, of course, offended people like John Goodman who has hosted 13 times (a.k.a. “a Goodman’s dozen”).

James Franco asked the audience at large, “Did you get my email?” and 50 Shades of Grey star Dakota Johnson asked for hosting tips (she’s fronting the show on Feb. 28). Then former Alaska governor Sarah Palin asked how much Lorne Michaels would pay her to run for President in 2016 — and bring Donald Trump as her running mate. Seinfeld assured her that it would be priceless. Former SNL cast member Ellen Cleghorne wanted to know why there aren’t more black women in the world in general.

Then Seinfeld alighted on his old friend Larry David who had just one question: “Was I really a writer here?” Turns out he wrote for the show for one season. It was David who got the last laugh when Seinfeld asked him if he was going to the after party, and David got a look of abject horror on his face shaking his head, “No, no, no.” 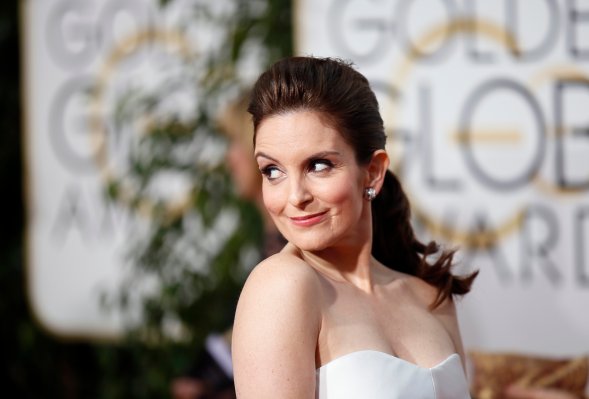 Watch Tina Fey Get Eaten By a Land Shark on <em>SNL</em> 40's Weekend Update
Next Up: Editor's Pick