If you were surprised by Jon Stewart’s announcement that he was leaving The Daily Show after 17 years, so was the show’s staff. “We found out when the world found out,” said Travon Free, a staff writer on the satirical news program.

Head writer Elliott Kalan wasn’t quite ready to talk about what comes next: “Jon isn’t going for awhile, the show is continuing . The show itself is going nowhere and I assume we’re going nowhere.” Daniel Radosh, a staff writer, added: “The show is still going to need writers, so if nothing else we have the inside track.”

“Unless the new host is Colin Mochrie from Whose Line is it Anyway? And it’s all improv,” noted Kalan. “Then they wouldn’t need writers.”

When asked who his dream host would be, Free replied: “I’m working for the guy. That’s why I moved from Los Angeles to New York was to work for the dream host of The Daily Show. It’s sappy, but it’s true. I couldn’t ask for a better.” Kalan and Radosh both agreed with him.

Rory Albanese, who was a writer and executive producer at The Daily Show for 14 years, is also feeling nostalgic. “I grew up on The Daily Show,” he said at the WGA Awards Saturday night. “Whoever takes over takes the show, no matter how great they are going to be, they will never be Jon Stewart. I don’t mean that they won’t be as good or as talented, but it will be hard.”

Albanese is now the executive producer of The Nightly Show with Larry Wilmore, providing a first-hand experience of the difficulties of following in someone else’s shoes. “Whoever takes over that job, initially people are just going to be mad at them,” said Albanese. “People were mad at Larry for not being Stephen [Colbert] for like an hour, before realizing he was good too. So whoever gets the job will have people angry that they are not Jon and then they will get over it.”

To ease the transition, Albanese thinks it would be helpful to give the show a little time off first. “The best thing to do would be to shut down the show for a little while, figure out what [the new host’s] style is going to be on the show and then bring that forth, whatever that is,” said Albanese. “I wouldn’t try to do what Jon’s done exactly, though, because it would be near impossible.”

Not that Albanese thinks the new host should shake things up too much. “The Daily Show is Comedy Central’s franchise like The Tonight Show. When Carson left it was still a talk show,” said Albanese. “The way [Jimmy] Fallon did it was smart, because he brought what he was good at—the musical stuff, the sketches—and put that on the show. Whoever comes to The Daily Show should bring their style to the show, but sitting behind the desk and commenting on politics is what The Daily Show is about, bare bones.”

That said, Albanese is ready for some change: “I feel like there has been a certain style that has saturated late night for a long time and it would be nice to have a woman in that spot. For me, not having one female in late night means there is a huge gap. There are so many brilliant comedians who are women and I would vote that way if I had a vote, but I have no say.”

Lizz Winstead, who co-created The Daily Show, isn’t sure that the format needs under a new host. “The show is important is because it really does use humor and speak truth to power, so I don’t think keeping the format is as important as making sure you stay as this relevant response to what’s happening in the news and how the media is dealing with it.”

“There is a strong woman’s voice on that show and has been since the beginning,” said Winstead when asked about who could replace Stewart as host. “My dog in the race is a long shot: Rachel Maddow. She’s a funny woman who will keep the relevance going. I also think Aisha Tyler would be great. They’ve both done extensive driving-the-show conversation work and they are both in the space of talking about the world.”

The Nightly Show host Larry Wilmore agrees, “I think a woman doing it would be fantastic. I think there’s a lot of good candidates for that, too.”

Whoever takes over hosting the show, Wilmore, who served as the show’s “Senior Black Correspondent” before getting his own show, knows how tough it can be to follow Stewart and Colbert. “I feel pressure following Stephen and following Jon,” laughed Wilmore. “There’s pressure to make sure the audience sticks around for what I’m doing.”

Most Popular on TIME
1
Could Amsterdam's New Economic Theory Replace Capitalism?
2
Biden Was My Best Man. Now He's My President
3
6 Rookie K-Pop Groups to Watch in 2021 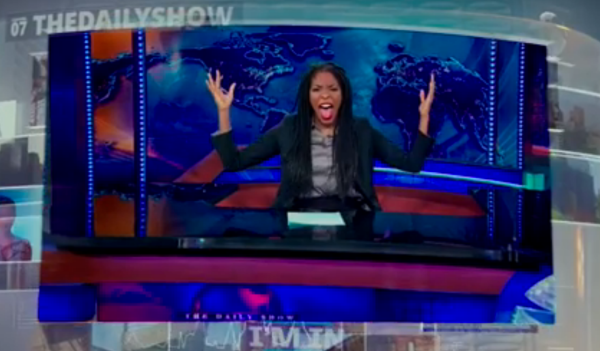 Did <i>Hot Tub Time Machine 2</i> Predict the Next Host of the <i>Daily Show</i>?
Next Up: Editor's Pick