A victim is carried into an ambulance after a shooting at a public meeting and discussion arranged by the Lars Vilks Committee about Charlie Hebdo and freedom of speech on Feb. 14, 2015 in Copenhagen.
Lars Ronbog—Getty Images
By Lisa Abend

“Still alive in the room.”

As gunfire erupted outside a Copenhagen cultural center on Saturday afternoon, French ambassador François Zimeray tweeted that message to the world.

The message conveys some of the terror that Zimeray and other participants in a panel discussion on freedom of speech must have felt. But the presence of mind that it took to send contains an even more chilling suggestion: no longer are such violent crimes unexpected.

Although Danish authorities have not detained the perpetrator or established his motives, all evidence suggests that the Feb. 14 attack, like that at the Parisian satirical magazine Charlie Hebdo, and like several attempted attacks in Denmark before that, was motivated by cartoons of the Prophet Muhammad.

Soon after 3:30 p.m., a gunman (authorities originally said there were two, but later revised the figure) wearing a maroon baklava and armed with an automatic weapon tried to shoot his way into the café at Krudttoenden, a cultural center in eastern Copenhagen, where a discussion entitled “Art, Blasphemy, and Freedom of Expression,” was underway.

He was prevented from entering by police, but not before he fired dozens of shots, killing a 40-year-old man, and injuring three officers. For Swedish cartoonist Lars Vilks, who was attending the panel discussion, there was no doubt about who the intended target was: himself. After publishing a cartoon in 2007 that depicted the Prophet Muhammad as a dog, Vilks had a $100,000 bounty placed on his head by the then-leader of Al Qaeda in Iraq, and has been the object of several assassination attacks.

“What other motive could there be?” he told the Associated Press.

The Danish prime minister identified the attack as terrorism and put the nation on high alert. Police have set up controls around major transit hubs to prevent the perpetrator, who escaped the crime scene by hijacking a VW Polo, from leaving the country. Just after 1 a.m. on Feb. 15, a second shooting took place, this one at Copenhagen’s main synagogue. According to police, one person was shot in the head and two police officers were wounded, but they have not yet determined whether this attack is related to the earlier one. The suspect in the synagogue shooting fled on foot.

“We must end this as soon as possible, because we must not get into a situation like the one we saw in Paris, where they took hostages, ” Hans Jorgen Bonnichsen, chief of operations for the Danish intelligence service PET, told the Danish newspaper Berlingske.

He wasn’t the only one with the Charlie Hebdo attacks in mind. In January, Islamist extremists angered by the satirical magazine’s publication of its own Muhammad cartoons entered its offices and killed 12. “After Charlie Hebdo happened, it was obvious that other people could be inspired by it to do the same thing,” says Lars Erslev Andersen, senior researcher in international security at the Danish Institute for International Studies. “At the same time, one of the reactions was for other media to publish the cartoons [in solidarity]. So on both sides we see the confrontation heating up.”

It may be heating up, but its roots go far back. In 2005, the country’s biggest newspaper, Jyllands-Posten, commissioned and published the original Muhammad cartoons. Many Muslims around the globe were outraged, and protests—some of them violent—broke out around the world. Editors and cartoonists at the paper began receiving death threats. In 2008, a thwarted assassination attempt against the cartoonist Kurt Westergaard prompted 17 other Danish newspapers to publish the cartoons themselves.

Denmark has a strong tradition of free speech, and for many in the largely secular country, publishing the cartoons was a way to defend the nation’s key values. But for others, they were a needless provocation. “What we found is that in many instances we don’t have support,” says Flemming Rose, former foreign editor of Jyllands-Posten and author of Tyranny of Silence, about the effects of the cartoon affair. “We’ve been confronted with ‘Maybe it’s your own fault. If you publish that, you’re asking for violence.’”

In the wake of threats and attempted attacks, Jyllands-Posten dramatically increased security for its building and its employees. That may have played a role in the decision to attack Krudttoenden, says terrorism expert Magnus Ranstorp, who advises the city of Copenhagen on how to curb radicalization among its Muslim youth. “Jyllands-Posten is one of the best protected buildings in the country. But when you tighten security around particular targets, you’re going to have displacement onto more vulnerable ones.”

More pertinent, however, is the cartoons’ continued traction, even a decade after the original ones were published. “Extremists are not stupid, that’s why they keep on targeting this,” says Ranstorp. “They know how the cartoons resonate in the broader community, and they can use the issue to seek legitimacy and mobilize support. Thousands protested in 2005, when the cartoons first came out, and since then, it’s kept on coming.”

That resonance is unlikely to decrease anytime soon, with extremism increasing throughout Europe. More than 110 Danes who have gone to Syria or Iraq to fight with ISIS, which is itself reviving the anti-cartoon campaign. “Although the cartoon affair never died on jihadi websites, it had mostly disappeared from the Muslim mainstream,” says Erslev Andersen. “The strange thing is that the drawings pop up again with the Islamic State. A new war on terrorism started in August 2014, and it’s as if this old conflict was woken up by it.”

If the perpetrator of the Copenhagen shooting proves to have carried out the attack for those motives, it will no doubt prompt more media to publish the cartoons in defiance, and the embattled cycle of free speech and religious belief will continue. After the Charlie Hebdo attacks, Jyllands-Posten did not join other Danish newspapers in republishing the French magazine’s cartoons (“We have lived with the fear of a terrorist attack for nine years, and yes, that is the explanation why we are not reprinting the cartoons,” the newspaper explained in an editorial. “We are also aware that we are therefore bowing to violence and intimidation.”).

But not all supporters of free speech will be silenced. As police swept the building for suspects on Saturday’s attack, attendees at the Art, Blasphemy and Free Expression panel continued their discussion. “We couldn’t go anywhere,” organizer Helle Merete Brix told Berlingske, “so we just kept debating.” 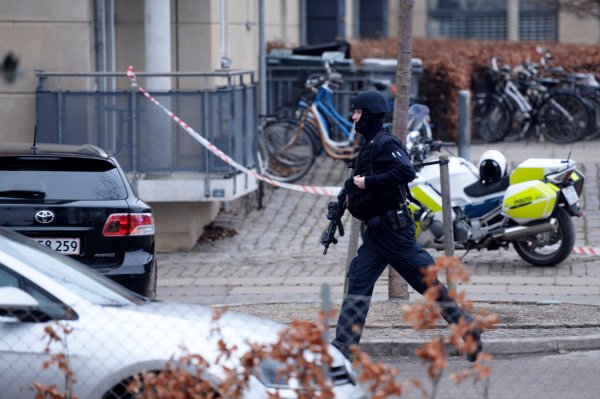