How to Deal With an Office Romance

If you’re currently crushing on, seeing, secretly dating, or hooking up with someone in the office, you’re probably wondering if you’ve gone mental with all of the questions swirling around in your mind.

Am I putting my job at risk? Is this girl or guy worth the constant morning distraction and pressure to find something perfect to wear each day? How do other people handle matters of the heart at work? Does this relationship even have a chance to work? What if it backfires?

Whoa, ok, take a deep breath. I’ve been there, and I know exactly how stressed you must feel. But, it’s sort of exciting right? Sure there’s a chance it may not work out, but you’ll never know if you don’t try. Once you know for sure that your company doesn’t have a fraternizing policy, then you’ll want to do your best to pursue your feelings in the right way. Here are tips, real life stories, and stats to help you figure out your next course of action, including a love contract. Yes, a love contract.

MORE What Fifty Shades of Grey Says About Your Office Crush

In a recent survey conducted by Vault.com, 17% of women report that office romances led to long-term relationships and 20% of women have taken gone so far as to date a supervisor.

Such was the case with “Jane” who has chosen to remain anonymous while sharing her office love story.

Jane and her ex-boyfriend had been broken up for months before she realized weekends were becoming dateless and lonely.

“I decided after some whiskey shots, that I would try Match.com on Saturday night,” she said. “I was quick to set up my profile–three photos and the most basic info I could add without answering any real questions. I really just wanted to research the kinds of men that were online.”

She fell asleep only to wake up with a headache and in panic, afraid her ex would see her online. She quickly logged on with the intention of deleting her profile, and there it was: an email from her company’s CEO.

Curious about this so-called relationship agreement, also known as a love contract? Here’s what this document usually entails, with it’s main purpose being to protect the employers from certain risks and liabilities.

According to Beth Zoller of XpertHR, an online service that provides HR professionals with practical compliance tools, a love contract is a document signed by employees involved in a romantic relationship setting parameters for their relationship in the workplace.

Though Jenelle Augustin, 25, and CEO of Jones Lifestyle Group LLC in another office romance narrative, didn’t sign a love contract, she did take a similar approach to slyly dating in the office to that of Jane.

Augustin met and began dating her husband after they were seated in neighboring cubicles.

The key to a successful office romance is maturity in both parties. You should also discuss the trajectory of your relationship as early as reasonably possible. No one wants to become office gossip and then break up!

That final piece of advice from Augustin is exactly what tops the list of inter-office-dating tips from Irene LaCota, spokesperson for international matchmaking service It’s Just Lunch. LaCota recommends:

“Keep quiet around others. Try to keep your relationship private as long as possible, especially during the early stages when you’ve made no commitments to each other. Otherwise, coworkers will scrutinize the two of you and fuel the office rumor mill.”

MORE What Do You Do About That Office Crush?

But, LaCota says, you must communicate with each other before your relationship gets too serious and discuss the rules of the “partnership” so neither of you will misunderstand the other’s intentions and be hurt.

“As a couple, develop speaking points so you both offer the same story when someone in your office asks about the two of you. Co-develop standards for how you interact at the office.”

She says that many a relationship has been hurt because one person tries to be discreet at the office and the other person expects some displays of affection.

“For example, the guy interprets a head nod as a brushing off when all the girl was simply to do was be discreet,” says LaCota.

As for traveling together on business? LaCota says no matter what, “do not share a room together, in fact, don’t even enter the other’s hotel room. You never know who you’re going to bump into in that hotel hallway.”

And, I can only imagine the subsequent awkward conversation you’ll be forced to have. And, that my friends, is for a separate article. 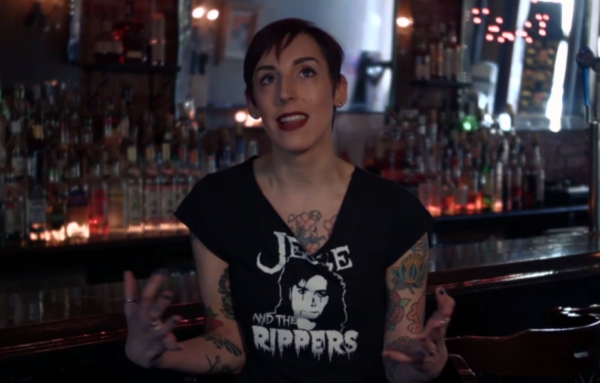 Watch Bartenders Explain How They Totally Know You Met Your Date Online
Next Up: Editor's Pick