The Story Behind World War II's Most Famous Photograph

One day in late February of 1945, TIME correspondent Robert Sherrod cabled his editors a report about what had occurred on the island of Iwo Jima during the previous day. The island’s Mount Suribachi had been captured that morning, Feb. 23, and an American flag had been raised there. “A lot of the boys cried when they saw the flag raised on top of the mountain,” Sherrod reported, in parentheses, having heard so from a marine officer.

“When the U.S. flag was raised over this highest point on the island,” the magazine duly informed readers in the next issue, “some marines wept openly.”

(Read more about Sherrod’s cables from the beginning of the battle here.)

The sight that made those men weep led to one of the most enduring images of the war and perhaps the 20th century. The Joe Rosenthal Associated Press photograph of a flag-raising on Suribachi was printed in that very issue of TIME, with a caption noting that the moment would “rank with Valley Forge, Gettysburg and Tarawa.” And, within weeks, the picture had become, as TIME reported then, “easily the most widely printed photograph of World War II.”

But did the photograph actually capture the moment that made the marines cry? It’s hard to be certain. Rosenthal’s photo wasn’t of the first moment the mountain was captured and claimed, as TIME explained:

And, the article added, neither of those moments were official. Though the high point had been captured, it would take weeks for the marines to take the whole island. It wasn’t until March, when that mission had been accomplished, that the U.S.’s Admiral Chester Nimitz supervised the official raising of an American flag at Suribachi.

Read next: The True History Behind Downton Abbey’s Anti-Semitism Storyline 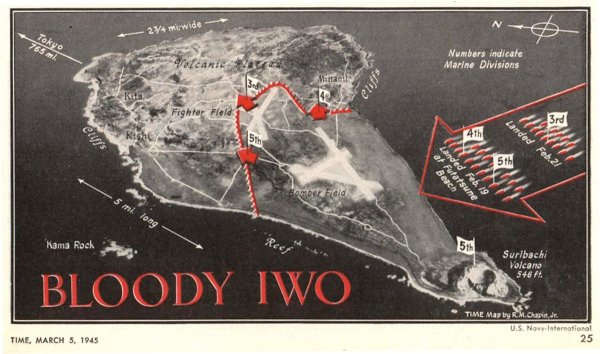 Read an Eye-Witness Account of the Battle of Iwo Jima
Next Up: Editor's Pick