Face it, you’re screwed. Today is Friday the 13th — the unluckiest day on the calendar — so try not to crash your car, fall down a flight of stairs, set yourself on fire or do anything else that might compromise your well-being. And for God’s sake, stay away from men in hockey masks.

The number 13 has been unlucky for centuries. Some historians peg the superstition to the 13 people who attended the Last Supper (neither Jesus nor Judas came out of that one O.K.), but ancient Babylon’s Code of Hammurabi omits the number 13 in its list of laws, so the superstition dates back to at least 1700 BC. Thirteen is so unlucky, in fact, that in 1881 an organization called the Thirteen Club attempted to improve the number’s reputation. At the first meeting, the members (all 13 of them) walked under ladders to enter a room covered with spilled salt. The club lasted for many years and grew to more than 400 members, including five U.S. Presidents: Chester Arthur, Grover Cleveland, Benjamin Harrison, William McKinley and Theodore Roosevelt. Despite the club’s efforts, triskaidekaphobia (that’s fear of the number 13) flourished; even today, most tall buildings don’t have a 13th Floor.

The number’s association with Friday, however, didn’t take hold until the 20th century. In 1907, eccentric Boston stockbroker Thomas Lawson published a book called Friday the Thirteenth, which told of an evil businessman’s attempt to crash the stock market on the unluckiest day of the month. Thanks to an extensive ad campaign, the book sold well: nearly 28,000 copies within the first week. In 1916 the book was turned into a feature-length silent film.

Wall Street’s superstitions about Friday the 13th continued through 1925, when the New York Times noted that people “would no more buy or sell a share of stock today than they would walk under a ladder or kick a black cat out of their path.” Some stock traders also blamed Black Monday — Oct. 19, 1987 — on the fact that three Fridays fell on the 13th that year. The Stress Management Center and Phobia Institute estimates that $700-$800 million dollars are lost every Friday the 13th because of people’s refusal to travel, purchase major items or conduct business.

Then came Jason. In 1980, Paramount Pictures released Friday the 13th (tagline: “Fridays will never be the same again”), a slasher flick about a series of murders at a summer camp. Apparently Jason, born on Friday the 13th, chooses that date to take revenge on oversexed campers much like the ones who allowed him to drown in Crystal Lake. So much for trust falls and lanyard-making.

• A child born on Friday the 13th will be unlucky for life.

• If a funeral procession passes you on Friday the 13th, you will be the next to die.

Friday the 13th Anecdotes:
• In 1913, a New York pastor tried to assuage couples’ fears by offering to marry them for free on Friday the 13th.

• In 1939, a small town in Indiana forced all black cats to wear bells on Friday, Oct. 13. When the measure seemed to work (nothing bad happened, at any rate), the town continued the practice for the next three years.

• At the time, Oct. 13, 1989, was the second largest drop of the Dow in history. Nicknamed the Friday-the-13th mini-crash, these days it’s not even in the top 10. That might be the scariest fact of all. 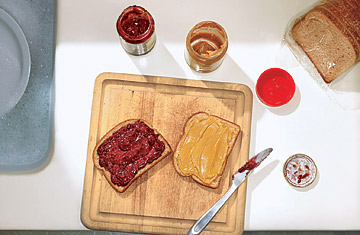 A Brief History of Peanut Butter
Next Up: Editor's Pick