South Africa’s State of The Nation Address Starts With a Fistfight, Ends With a Dance

At least on some things, South African President Jacob Zuma knows how to deliver. His much-anticipated State of the Nation Address on Thursday night in Cape Town promised a spectacle. The nation got a circus that kept South Africans glued to their TV screens for several hours with scenes of heckling parliamentarians, fistfights on the parliament floor, an opposition party walkout and Zuma’s inappropriate chuckles. There was even a note of spy-craft intrigue: cellphone signals were mysteriously blocked for 20 minutes, preventing journalists from tweeting and filing stories and photos from the venue. The actual content of Zuma’s speech — uninspiring and lacking in content by most assessments — will be forgotten long before the full impact of a precariously divided government is felt on the country and Zuma’s political future. “It was hard to believe that South Africa is a functional democracy,” lamented an editorial in the local Times newspaper. “For a solid hour last night South Africa resembled a messy, dysfunctional state being held together by the security forces.”

Shortly after taking the podium, Zuma was interrupted by a member of the rabble-rousing Economic Freedom Fighters EFF party demanding to know when he would pay back government funds inappropriately used to upgrade his personal residence. Another cheekily asked how the estimated $21 million would be repaid – via cash, electronic transfer, or debit card? Three times they were ruled out of order, part of a carefully choreographed campaign to shame the President. When EFF leader Julius Malema, a one-time Zuma acolyte turned opponent, insisted that he had the right to be heard, the speaker of the house called in the security forces to evict all 25 members of the party. Television screens went momentarily dark. Photographs taken during what cable operators termed a feed interruption show the red jumpsuit-clad EFF members struggling with the guards, some using their trademark red hardhats to bash their way out of security cordons. By the time the television broadcast resumed, not a single member of the EFF, which makes up a very loud six percent of parliament, remained in the room. A few minutes later all 89 members of the official opposition Democratic Alliance walked out in disgust, leaving just the 249 members of Zuma’s African National Congress, and a handful of independents, behind.

The room thus cleared of naysayers, Zuma returned to the podium an hour after the scheduled start with a triumphant chuckle. He was met with a burst of applause from his African National Congress party faithful, but the content was not worth the accolades. Considering that South Africa is wracked by a power crisis that leaves many parts of the country in the dark for several hours every day, a crumbling economy (the Rand hit a 13-year low the evening before the speech), rising civil unrest, and the highest youth unemployment rate in Africa, Zuma’s speech was disappointingly lacking in urgency and concrete solutions. He did promise a $2 billion bailout of the cash-strapped Eskom power utility, but failed to say where, exactly, the money would come from. He also laid out a nine point plan to “ignite growth and create jobs” that echoed earlier economic strategies that have yet to bear fruit. And he pledged that foreigners would no longer be able to own land in South Africa. It was a sop to rural loyalists, perhaps, but a threat to the foreign investment that is a large part of the country’s economic lifeblood.

If Nelson Mandela’s first Presidential address to South Africans established the ANC as the party of the country’s promising future 20 years ago, Zuma’s state of the nation speech on Feb. 12 firmly cemented it in a dysfunctional present. “What did Zuma’s speech tell me? It tells me we are doomed,” says 34-year-old Cape Town resident Jacques, who asked to go by only his first name. “He didn’t give us any real plan on how we are going to turn the situation around. Already the foreign companies are fleeing, and they are taking the jobs with them.” Jacques at least has a shop assistant job, a relative rarity in a country where one in two South Africans between the age of 18 and 35 are unemployed. Jacques grew up as an ANC supporter, but says that he has lost all respect for the party that took Black South Africans like him from apartheid to equality. “Zuma says he is bringing changes, but only thing the ANC brought us was Mandela,” says Jacques. “I don’t even bother voting anymore.” He is not alone. In the 2014 parliamentary elections, more South Africans chose not to vote than voted for the ANC, a damning demonstration of national frustration. Not that Zuma and members of his party members appear to be doing anything to counter the trend. Instead they celebrated their “victory” over the EFF by dancing the night away on Parliament’s steps. It was a marked reversal for a party that once made history by speaking out of turn, and whose members were carted away by armed security guards for daring to do so.

Read next: See the Photos That Gave Americans Their First Glimpse of Apartheid in 1950 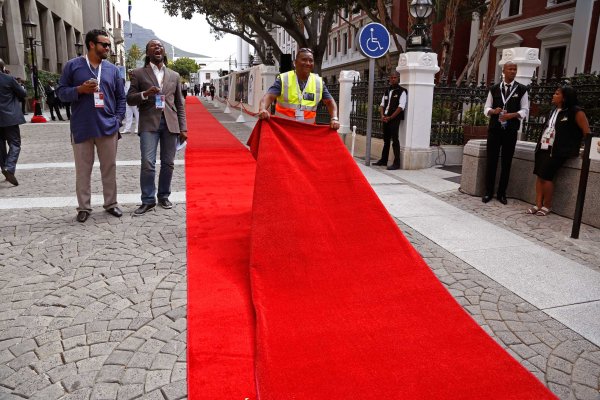 South Africa's State of the Nation
Next Up: Editor's Pick