FBI Director James Comey urged the nation’s law-enforcement officers to acknowledge implicit biases toward people of color that have led to distrust among police and minority communities, in one of the highest-profile speeches yet given by an FBI chief on race and policing.

Comey urged police departments across the U.S. to work toward mending those relationships in the wake of high-profile officer-related shootings. “There’s a disconnect between law-enforcement agencies and the communities they serve,” Comey said during the speech at Georgetown University.

Comey encouraged police nationwide to have an “open and honest discussion” about the relationship between officers and communities of color, and the unconscious biases that often trigger people to act differently around individual of other races.

“We simply must find a way to see each other more clearly,” he said.

The FBI director described situations where white officers have different reactions when dealing with black individuals, describing mental shortcuts that can lead police into being more suspicious of people of color.

“We need to come to grips with the fact that this behavior complicates the relationship between the police and the communities they serve,” Comey said.

The speech came after a series of protests last summer relating to the deaths of Eric Garner and Michael Brown. Garner, who was black, was placed in a fatal chokehold in July by NYPD officer Daniel Pantaleo, who is white. Brown, a black unarmed teenager, was shot in August by Darren Wilson, a white police officer in Ferguson, Mo. Neither officer was formally charged for their roles in the deaths, leading to demonstrations around the nation and protesters chanting phrases like “I can’t breathe,” which Garner said as he was being apprehended.

Comey said officers have to have a better understanding of how black men often view the police. “I am not looking to let law enforcement off the hook,” Comey said. “But we must double the efforts to fight prejudice.”

Comey quoted NYPD Commissioner William Bratton, who himself has been criticized for advancing a theory of policing that some believe unfairly targets minority communities, saying that “we really need to see each other.”

The speech was notable for addressing race in America head-on. Comey at times painted a sweeping history of distrust between the FBI and minorities, at one point describing a letter on his desk that approved the wiretapping of Martin Luther King Jr. in the 1960s.

“It is a hard truth that lives on,” he said.

But it will be difficult for the FBI director to actually persuade local law-enforcement agencies to change their behavior wholesale. One initiative Comey said he is working with police departments on is gathering more extensive data on officer-related shootings. While the FBI tracks justifiable homicides reported by police departments, that reporting is voluntary, Comey said, and demographic information regarding those incidents is not tracked.

“It’s ridiculous that I can’t tell you how many people were shot by police in this country,” Comey said in a question-and-answer session with Georgetown students, adding that all he could do was use his bully pulpit to persuade police departments to report their data, which he described as the first step to repairing a long history of distrust between police and minorities. 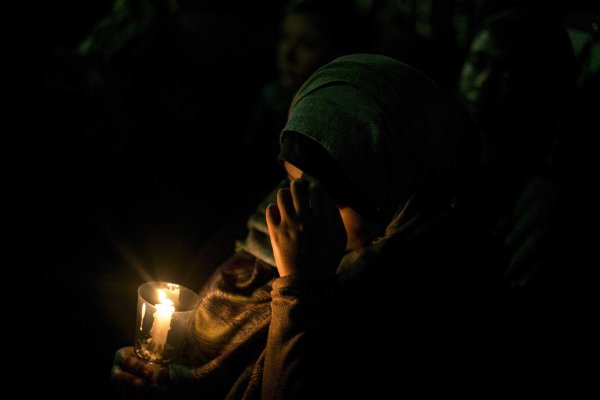 Scenes from the Vigil for Chapel Hill's Shooting Victims
Next Up: Editor's Pick