This Is the Best Smartwatch For Most People

A good smartwatch connects to your smartphone, but it actually untethers you from nervously checking that phone. The smartwatch (for now) that best augments your Android or iPhone, and looks good doing it, is the Pebble Steel.

After more than 40 hours of research, wearing and comparing nine smartwatches, and keeping a close eye on battery life and Bluetooth connections, we found the Pebble Steel to be the most adaptable watch for most wrists and lifestyles. Its battery lasts nearly an entire work-week—the longest of any we tested—it has the most useful apps, and it holds up to abuse.

How we decided what to test

We tested smartwatches primarily on how they did their main job: showing notifications from your phone, and controlling a few parts of it. We also put a good deal of weight on the visibility of the screen, the interface of the watch, and the ability to keep running all day.

But looks matter, too, when you wear something every day. The size, heft, and visual appeal of each watch was considered, as well as its bands and clasps. We fastened our smartwatches on many friends’ wrists, male and female. And we considered the external experience with each watch: the connection-managing app that came with every watch, the charging dock and cable, and the third-party apps and tools compatible with each watch. Our full guide has more details on what we did to narrow down the field and test smartwatches.

For the time being, the Pebble steel is the most useful smartwatch for most people with Android or iOS devices, and it arguably looks the best on most wrists, too. Its battery lasted the longest of all those we tested, and it has the most useful apps among the competition. Its always-turned-on screen is black and white, but that Kindle-like quality and automatic backlight make it visible in all situations.

The Pebble lets you choose which apps it will watch and pass along notifications to your watch. When they arrive, you can dismiss them from both watch and phone, avoiding redundancy. On certain messages, you can also fire back a quick pre-written reply (or emoji character). Support for fitness apps like RunKeeper and Misfit, along with basic music controls, is built in to the Pebble. You can find many more apps and tools in Pebble’s appstore, as well as watchfaces ranging from classic Swiss hands to round-cornered Star Trek displays.

The Steel’s magnetic charging cable is small and light, although not as convenient as a dedicated dock. That’s fine, because you won’t need it often. It took more than 82 hours of continuous use to run down a brand-new Pebble Steel completely, putting it far past all competitors. If you turn the watch off at night, that’s more than five 16-hour days. The closest competitor was the LG G Watch R, which went 43 hours on serious battery-saving settings.

Design-wise, the Steel’s namesake metal face attaches to a (non-standard) leather or steel band. It doesn’t look like a fashion watch, but it isn’t a throwback Casio digital, either. At 46mm tall by 34mm wide, the Steel’s body is about the smallest of the current smartwatches; it looked the least cumbersome on the females and smaller-wristed males who tried it on. The body takes bumps and drops well, and is waterproof to 5 atmospheres, covering spills, dish washing, and dips in the pool.

The runner-up (for Android)

If you have an Android phone, and absolutely love it, there are about a half-dozen Android Wear watches to pick from right now. Most look like matte black match boxes or hockey pucks on first glance. Some have bad screens.

The best combination of looks and features is Motorola’s Moto 360. Its round face and higher quality bands set it apart, its magnetic charging dock is convenient, and its wrist-back heart monitor can track your activity levels all day. Google’s Android Wear platform is still a bit raw—its gestures and swipe actions are far from intuitive—and the battery life requires charging every night. But it’s easily the best of what’s around, Android-wise.

What about the Apple Watch?

The Apple Watch, arriving in April 2015, will be available in small and large sizes, three levels of material and finish (“Watch,” “Watch Sport,” and “Watch Edition”), and start at $350. It will, of course, require an iPhone. It will offer a variety of subtle vibrations, its interface is a very new thing from the iPhone, and its battery life is an unanswered question. We will be testing an Apple Watch as soon as it’s available, so watch our full guide for updates.

In a rather early-stage field, the Pebble Steel stands out as, all-around, solid: looks, battery life, app and phone support, and a dedicated company behind the product. At $200, or sometimes less on sale, the Pebble Steel is the best smartwatch you can buy right now. 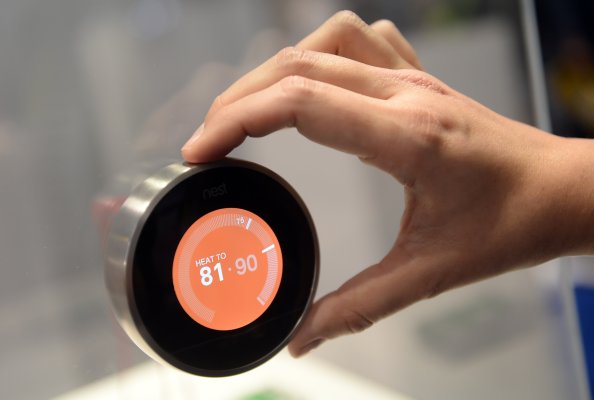 6 Gadgets That Can Help You Save Money on Your Energy Bill
Next Up: Editor's Pick