The Critics Were Wrong About Obama's Prayer Breakfast Speech

President Barack Obama speaks during the National Prayer Breakfast on Feb. 5, 2015 in Washington D.C.
Getty Images
Ideas
By Eric H. Yoffie
Eric Yoffie is a writer and lecturer and was President of the Union for Reform Judaism from 1996 to 2012. Rabbi Yoffie's writings on American religion, interreligious dialogue and Israel and the Middle East are collected at ericyoffie.com.

Fierce certainty is the enemy of religious belief. President Obama understands that. The religious right does not.

In a remarkable address to a national prayer breakfast on February 5, Mr. Obama gave one of the better speeches of his presidency. The heart of his message was that “the starting point of faith is some doubt.” The major religious problem of our time, he suggested, comes from so-called believers who are so full of themselves and so confident they are right that that they cast aside all humility. They think that God speaks only to them. From this they conclude that they alone are in possession of the truth and that God cares only about them.

The first thing to be said about the President’s thesis is that it is self-evidently correct. Faith in God, even of the most intense variety, is invariably accompanied by doubt. The most religious people I know are those who acknowledge their struggles with belief and their constant efforts to confront and overcome them. Of course, many of us have met “in-your-face-believers” who proclaim the absolute certainty of their religious convictions. But in my experience, these are the people who, in fact, are eaten alive by doubt and feel the need to compensate with unending public affirmations of their faith.

President Obama went on to suggest how the principle of religious humility must be applied in our lives. He condemned emphatically those in the Muslim world who distort their religion by acts of unrestrained self-righteousness. He expressed his horror at those who commit acts of barbarism in the name of Islam, substituting a cult of death for thoughtful belief. And he mentioned that other traditions, too, fall victim to lack of humility that leads to a deadly misuse of power. He gave as examples the Crusades, religious justifications for slavery and Jim Crow in the United States, and recent acts of religious violence in India.

Here again, these are matters that are self-evidently true. While the President did not mention every major religion, Judaism included, he could have. All religious traditions succumb at certain times to an internal religious dynamic in which sacred texts are misused by extremist elements. They embrace a belief in a vengeful, hateful God, and use this belief to justify killing and fanaticism.

In the remainder of the President’s remarks, he spoke movingly of America’s imperfect but impressive record of preserving religious dynamism and promoting religious moderation. America has done what most democracies have not by insisting on both freedom of speech and freedom of religion, while also maintaining separation between church and state. Americans, he said, have a vibrant religious life because they do certain things: They are humble about their religious convictions. They don’t allow government to get in the way of religious practice. And they defend the right of a person to insult another’s religion, while also using their freedom of speech to condemn such insults.

One would think that both religious and political conservatives would have applauded the President’s remarks, which celebrated American religion and affirmed the centrality of religion in American society. But, in fact, exactly the opposite happened. As noted in the Washington Post, Jim Gilmore, the former Republican governor of Virginia, called the President’s comments “the most offensive I’ve ever heard a president make in my lifetime.” Southern Baptist leader Russell Moore said the speech’s sentiments were “an unfortunate attempt at a wrongheaded moral comparison,” suggesting that the President’s emphasis should have been on defeating ISIS and not the sins of Christianity.

Why in heaven’s name the uproar, since the President’s words were so carefully chosen and so enthusiastically supportive of America’s religious way of life?

In all probability, denial was at work here. As a religious person, I know that it is not easy to acknowledge the uncertainties that insidiously seep into my religious beliefs, leaving me with doubts that I am loathe to admit. But doubts there are, for me and for all religious believers, and the President was wise to remind me of them and suggest humility on my part. Also, as a patriotic American, I am always inclined to focus on what my country does right. But American history includes evil acts for which we Americans must be held accountable, with slavery being an irrefutable example. And as a committed Jew who resists with all his being criticism of my history and traditions, even when justified, I understand how a Christian colleague would instinctively resist reminders of Christian sins, including those—such as the Crusades—that happened long ago and have been acknowledged by the Church.

The point is that it was the President’s honesty and sincerity that made his comments moving and powerful, especially since the sins and the doubts were not the heart of the speech. They were but the preview to his broader message that by grappling with such matters America has become the most religious of modern democracies, offering her citizens many paths to redemption, healing, and hope.

The most bizarre criticism of the President came from Ross Douthat of The New York Times. Douthat noted correctly that the President spoke in the spirit of Reinhold Niebuhr, the great Protestant theologian, and Douthat admitted the validity of much of the President’s argument. But, Douthat claimed, since the President is a political partisan, it must be assumed that he has partisan aims and that his use of theology is therefore inappropriate and must be discounted.

In other words, the same conservatives who dismiss Obama as a secular progressive now condemn him when he makes an effort to express a religious message in religious language. This is absurd. While religious talk can be abused, of course, God is neither a liberal Democrat nor a conservative Republican, and struggling with God language and fundamental religious questions goes back to the earliest days of the Republic.

Mr. Douthat should think back to the words of President Lincoln, our greatest President, at his second inaugural. Lincoln too suggested the need for religious humility, reminding us of a transcendent God whose will we cannot hope to entirely know, and drawing conclusions for a confused and hurting nation. We should thank President Obama for sharing with us his struggle with these questions and hope that future Presidents will do the same. 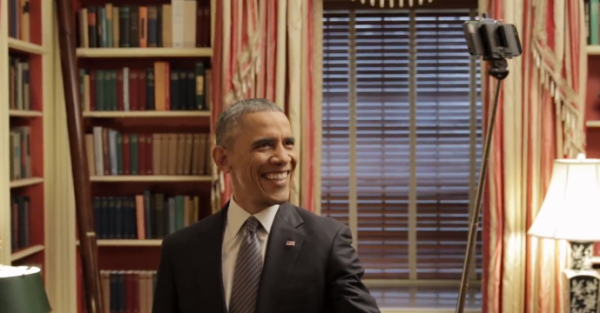 Watch Obama Use a Selfie Stick to Sell Obamacare
Next Up: Editor's Pick