Half a mile below the battlefield in eastern Ukraine, the team of coal miners didn’t hear the impact of the mortar that nearly killed them on Nov. 22. The projectile struck the shed that houses the mine’s electrical circuits, shutting down the ventilation system and the elevator in the mine’s deepest shaft. More than 50 men were now trapped down below.

Jerome Sessini, a French photographer, was with them that day in the mine, which is in the Petrovskyi district. Also present was the deputy director of the mine. “Everything is O.K.,” Sessini remembers hearing the mine official say. “Just walk and everything will be fine.” But the fear showed in the deputy director’s eyes as he knew the danger they faced: they had enough oxygen for about two hours before they would suffocate.

In the end the miners were luckier than many of the civilians trapped in the cross fire in eastern Ukraine. Since it started in April, the war between government forces and Russian-backed separatist rebels has taken more than 5,000 lives, many of them lost to the notoriously inaccurate rocket launchers–with Russian names meaning “hurricane” and “hail”–that both sides of the conflict use against each other.

The U.S. and its European allies have struggled to stop or even slow the carnage. A peace deal that the Western powers brokered in September was frequently violated by both sides before collapsing in January when the rebels launched a new offensive, seizing towns and taking control of a strategic airport near the city of Donetsk. According to the Ukrainian government and Western officials, the rebel forces are getting their weapons and fighters from Russia. Moscow denies any military involvement in the conflict.

Vladimir Putin, the Russian President, has resisted Western pressure to negotiate a cease-fire in Ukraine, even as the U.S. and Europe have tightened economic sanctions on Russia. Pleading for more Western support, Ukrainian leaders have meanwhile asked for supplies of what they call defensive arms, such as antitank weapons and reconnaissance drones, to fight the advanced Russian hardware now in rebel hands. But President Barack Obama has so far avoided arming Ukraine.

“I have not made a decision about that yet,” Obama said on Feb. 9 during a press conference in Washington. Standing beside him, German Chancellor Angela Merkel placed her hopes on the peace talks that were due to commence the following day in Minsk, Belarus, involving envoys from Russia, Ukraine and the separatists as well as European mediators. “Maybe nothing will come out of it,” Merkel said. “But I myself would not be able to live without having made this attempt.”

Merkel’s realism is understandable. The battles to control the eastern regions of Donetsk and Luhansk have reduced their neighborhoods and villages to shrapnel-pocked ghost towns, their residents either fleeing their homes or cowering in basements and bomb shelters left over from World War II.

Ukraine’s coal industry, which was the fourth largest in Europe only a year ago and the engine of the national economy, has been paralyzed by the fighting. Sixty-six of eastern Ukraine’s mines had been closed by the time winter set in, according to Euracoal, a Brussels-based trade association, and just 60 remained in operation. The drop in production–down almost 60% in October compared with the same month a year earlier–has created a critical shortfall just when the fuel is needed most to heat homes and produce electricity.

The miners who have stayed behind to work often go without paychecks for months, hoping to be compensated once the war subsides. “They try to show they are having a normal life,” Sessini says. “But you can see in their faces a kind of anger and frustration and depression.”

Some of those who blame Ukraine for their suffering have joined the separatist militias and placed their hopes in a broader Russian incursion to push the Ukrainian forces back. But the vast majority of miners have tried to stay on the sidelines, sometimes helping to clear the dead or find victims among fresh rubble.

Belowground, as the miners continue their work and mortars continue to rain down from both sides of the conflict, they are as likely to become casualties as they are to become rescue workers. The miners ultimately escaped from the blacked-out mine shafts that day in November on a rusted cable car powered by a small rescue generator. It took the men half an hour to find it, using only their headlamps to light the way, but it allowed them to travel by an underground railroad to an elevator that ran off a power source unaffected by the shelling. With less than an hour of oxygen to spare, the men reached daylight–safe from the dangers belowground but exposed to the shelling from above. 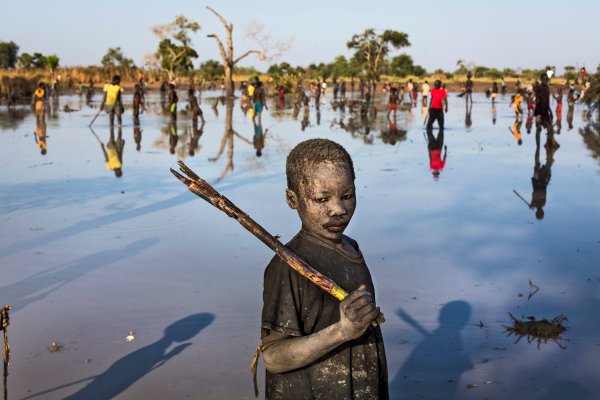 The Forgotten War in Sudan
Next Up: Editor's Pick