I come as a virgin to the Fifty Shades of Grey phenomenon, having read not a word of E L James’ three bestsellers — ignorant of the voluminous online commentaries, knowing little of the movie adaptation. So I take notes, like Washington State University student Anastasia Steele, and share them with you.

Here are 15 takes on Fifty Shades:

1. Anastasia (Dakota Johnson in the movie) literally stumbles into a meeting with Christian Grey (Jamie Dornan), 27-year-old owner of a huge Seattle IT company to which he pays almost no attention, since he is instantly obsessed with the frazzled, unconfident, we-won’t-say-mousy Anastasia. Smitten, he proposes that she be his sex slave — under stringent, lavish conditions. She takes the first book to consider his proposal and the rest of the trilogy to … well, you probably know. I don’t. Anyway, there are three.

2. A hundred million copies sold! And apparently it’s the lowest form of prose fiction — less literature than shiterature — with the enticement of gaudy bondage-and-discipline scenes. Inspired by the young adult Twilight series, James wrote for Actual Adults: women, mostly, to whose wishes, feats and dreams the risky romance of Ana and Christian spoke.

3. The Fifty Shades of Grey film opens in a double-whammy four days — Valentine’s Day in the middle of Presidents’ Day weekend — and is expected to stoke a $90-million windfall. For some, it’s a hearts-and-floggers date movie: A couple attends the movie, then he asks, “Dinner or my Red Room of Pain?” And mothers in the mall, they’ll tell their kids to go back and see the SpongeBob SquarePants movie another time-and-a-half. “Mom has some shopping to do” — for fantasies of romance and submission, whips and wisdom.

4. Among the early reviews, the critics are split between favorable and dismissive. And not to bury the lede any deeper, I’ll say while watching Fifty Shades I kept waiting to tumble into derision but never got there. My early curiosity built to a cozy level of admiration, then drifted off into ennui.

5. James (real name: Erika Mitchell) tweaked the Twilight teen virgin Bella Swan into the slightly older Anastasia, and reimagined sensitive vampire Edward as the well-mannered sadist Christian. The result had all the fidelity and floridity of fan fiction. The movie, directed by Sam Taylor-Johnson and scripted by Kelly Marcel, is just the opposite. It’s as if the filmmakers didn’t care much for the book’s literary lapses and dramatic excesses, and set out to make a solidly ethereal romance about a smart girl who realizes her strength when she meets a lost boy eager to fill her power vacuum.

6. Gone is James’s careless jargon; Anastasia doesn’t keep saying “Holy crap!” Diminished, degraded or simply hinted at are The Big Scenes. Johnson and Dornan spend plenty of time undressed (she fully nude, he topless but rarely trouserless or towelless); there are spankings and just a soupçon of wicked whiplash. But the lovemaking is mostly tender, canoodling, cuddling. It’s all foreplay. Creating a genteel R-rated film from a very X-rated book is like making a Mamma Mia! movie without the songs.

7. Sadomasochistic romance ought to be a burgeoning movie genre, because it touches on the power vectors in any relationship, and because each person frequently switches roles of dominant and submissive: you’re on top, you give in. Once in a while such a story connects becomes a film sensation, as when Marlon Brando toyed with Maria Schneider in an unfurnished Paris hotel room in Bernardo Bertolucci’s Last Tango in Paris. Mark Rylance took the Brando role, and Kerry Fox the Schneider, in the more sexually explicit art-house drama Intimacy in 2001.

8. Last Tango was so long ago, 1972. Back then, films strove mightily to be as mature and confrontational as novels and theater; and a movie house was the only place that a group of strangers could find public connection to erotic ecstasy and anguish. Shortly thereafter (Star Wars), cinema reverted to a kids’ medium and trained audiences to want only spectacle and sensation: action epics, horror films, rowdy comedies — circuses. Let’s go Wow, Eek or Ha together. Watching people make love is not participatory but nakedly voyeuristic; everyone in the auditorium feels weird. They laugh nervously or contemptuously, to prove their superiority to the urgent intensity on screen. Besides, they don’t need simulated sex in a theater; they can see the real thing for free, online at home.

9. But the E L James readership presumably wanted to see writhing, walloped bodies in the movie. Why is it rated R, not NC-17? For the reason most things are what they are in Hollywood: greed. Many theaters would not show a scrupulous adaptation; fewer people would pay to see it. Hence this Fifty Shades of Pale Grey, which underlines the filmmakers’ intuition that this is less a sex tale than a love story.

11. Ideally, sadomasochism is the most complementary of sexual role-players. You can’t have one without the other. Otherwise, it’s torture. (That’s what safe words are for.) Christian, veteran of 15 previous dominant-submissive relationships, has chosen Anastasia as his next partner. But she needs to decide if pain can give her pleasure. Does she like it? Can she stand it, for love of him? Can she upend his priorities and make herself the dominant? The 514 pages of the first Fifty Shades book, and the two-hour movie, still haven’t answered that question. Stay tuned for two more sequels.

12. In Christian’s “playroom,” decorated like the upmarket gift shop of a Louisiana bordello, we finally get to the climax: six whacks of a riding crop, which he gently, carefully prepares her for. Even by movie standards, the flogging is more ceremonial than sadistic. It hasn’t nearly the sickening impact of the 40 lashes given Mel Gibson’s Jesus in The Passion of the Christ, or the eight or 10 minutes spent on the torture of poor Patsey in 12 Years a Slave. The Fifty Shades scene is brief and demure. One might like to see the impact of Christian’s whipping on Ana’s emotions: perhaps pain shading into surprised enjoyment, or hardening into the resolve of revenge. But that’s for some other movie. Don’t we all dream up our private ones?

13. So Christian is a shade of Jane Austen’s Mr. Darcy. Dornan, 32 and Irish, is old-school handsome with soft features. He could be the young Colin Firth, minus the sad merriment in his eyes. (For film-history symmetry, Jennifer Ehle, who was Elizabeth Bennet to Firth’s Darcy in the 1995 BBC Pride and Prejudice miniseries, plays Anastasia’s blowzy mother.) The producers first hoped to cast Ryan Gosling, but he would have made Christian sulkier, more brooding, more Heathcliff. Manacles on the moors!

14. The movie’s warming revelation is Johnson as Anastasia. The 25-year-old daughter of Melanie Griffith and Don Johnson (and looking like neither of them), she has the gift of signaling her character’s shifting thoughts and feelings through the ripples of smile lines on either side of her mouth. Director Taylor-Johnson relies on closeups of her star as the heroine, the wordless narrator and the go-between, assuring the audience that what goes on will have a measure of emotional intelligence.

15. Having built tension by nicely guiding viewers smoothly through Christian’s courtship of Ana, Taylor-Johnson has little to deliver as a climax, erotic or dramatic. The submissive gets cropped, doesn’t like it and walks out, in an ending that is startlingly abrupt — and, to one impressionable audience of New York critics, the cue for a thunderclap of pig-snorts. The real moviegoers who see it by the tens of millions this weekend may have a reaction more like mine: muted, pleased and restless in turn. We’ll all have participated in an international event that, like the Super Bowl, needn’t be loved but must be endured. And in a movie universe where a grownup couple rarely gets the chance to challenge each other with love and bondage, Fifty Shades of Grey offers the first can’t-miss Date Night film since Gone Girl. 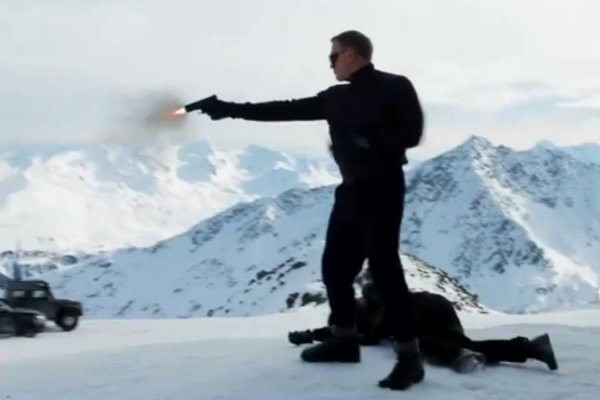 Here's Your First Look at Daniel Craig as James Bond in Spectre
Next Up: Editor's Pick