President Obama asked Congress Wednesday for authorization to continue fighting Islamic militants in Iraq and Syria, though lawmakers are already raising questions about the details of the plan.

In his request, Obama says ISIS is responsible for the death of four Americans and poses “a grave threat” to Middle East stability and to the national security interests of the U.S. and allies. The Administration has been fighting ISIS under congressional authority the Bush Administration received in 2001 and 2002 to attack Iraq and the perpetrators of 9/11. Obama has called ISIS a “different type of enemy” that requires a new legal authority to defeat.

Obama made clear that the authority he is asking for—known as an Authorization for Use of Military Force or an AUMF—would not ensnare a weary nation into the type of war he campaigned against in 2008. “My Administration’s draft AUMF would not authorize long‑term, large-scale ground combat operations like those our Nation conducted in Iraq and Afghanistan,” he wrote. “Local forces, rather than U.S. military forces, should be deployed to conduct such operations.”

The authorization, which is under three pages, will end in three years and does not allow “enduring offensive ground combat operations.” It defines the enemy as “organizations fighting for, on behalf of, or alongside [ISIS] or any closely-related successor entity in hostilities against the United States or its coalition partners.” It would repeal the 2002 authorization, but would not limit the fight to Iraq and Syria as some had hoped.

The AUMF will face opposition from both Republicans and Democrats. House Speaker John Boehner cautioned that the draft was an “important step forward” but only the “beginning of a legislative process” that would include hearings and mark-ups of the resolution. He also said that he hasn’t seen a strategy put forward by the Administration that accomplishes its goal to “degrade and defeat” ISIS. “We have an awful lot of work to do,” he said.

Senate Democrats, who were briefed by Obama’s Chief of Staff Denis McDonough and legal counsel Neil Eggleston on Tuesday, have already begun to question what exactly the Administration means by “enduring offensive ground combat operations.” 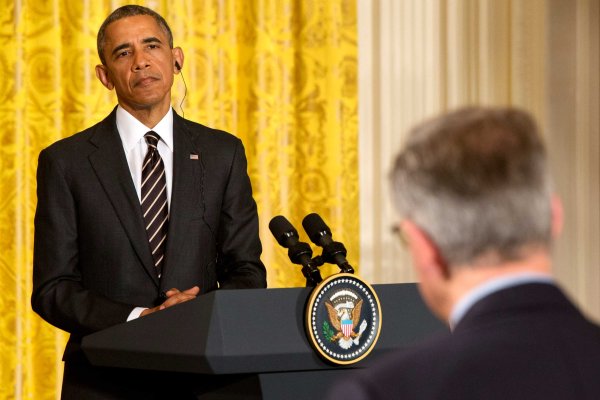 Obama Says He Didn't Mislead on Gay Marriage
Next Up: Editor's Pick