A woman rides a donkey past a convoy of government troops in Tabit village in the North Darfur region of Sudan, Nov, 2014.
Abd Raouf—AP
By Elizabeth Dias

A Human Rights Watch investigation released at the United Nations on Wednesday reports that Sudanese army troops raped at least 221 women and girls during a 36-hour attack on the Darfur town of Tabit that began on Oct. 30.

The report documents 27 first-hand reports of rape, 194 other credible accounts of rape and even confessions of two soldiers who had participated in the attacks that superior officers ordered them to “rape women.” Sudanese authorities then launched a cover-up, Human Rights Watch details, which included detaining and torturing Tabit residents for telling the truth about what happened.

Sudan Foreign Minister Ali Ahmed Karti categorically denied reports of a mass military rape in Tabit during an interview with TIME on Feb. 4, when he was in Washington as a guest of the National Prayer Breakfast.

TIME asked him about reports that his government’s armed forces are primarily targeting civilians and not combatants. Any claims of rape in Tabit, he claimed, are lies invented to keep people in refugee camps, where NGOs can make money. Tabit has been rebuilt, he said, with modern schools, health care and police centers.

“Nobody can expect a village like Tabit which had been a home for some hundreds of the soldiers there, they have their homes there, they have their wives there, and they are living in a camp near that place, no one will expect those soldiers will come and rape by hundreds in that village,” Karti said. “Not only the police is there, but the army is there, and it will protect you against anyone who will infringe your security.”

If NGO donors see the situation in the villages as unstable, Karti added, they will keep donating. “This is cutting throats of so many,” he said.

Media in Sudan, Karti continued, “have every right to go anywhere and talk about anything that may be causing atrocities to their homeland and people, so if nothing is coming out of that, that means that is only portraying the country in a way that will not at all help somebody like me to convince those who are in charge of a decision like removing Sudan from the list of terror.”

Sudan is one of three countries on the United States’ list of states that support terrorism, alongside Syria and Iran. Karti and the Sudanese government have been lobbying Washington to get Sudan removed from the list.

Sexual violence has historically been used as a weapon of war in the region—mass rapes were common in the Darfur massacre starting in 2003 and before that in the 1994 Rwandan genocide.

Special Prosecutor for Crimes in Darfur Yasir Ahmed Mohamed and his team talk to women during an investigation into allegations of mass rape in the village of Tabit, in North Darfur, Nov. 20, 2014.
Mohamed Nureldin Abdallah—Reuters

Until Wednesday’s Human Rights Watch report, international observers had not been able to adequately investigate what happened in Tabit. The African Union United Nations Mission in Darfur (UNAMID) failed to find evidence that the rapes happened at all when they were allowed to visit Tabit for a few hours on Nov. 9—government forces prevented peacekeepers from carrying out a credible investigation, Human Rights Watch and other activists explain, and days later Sudan shut the UNAMID’s human rights office in Khartoum before expelling two senior UN officials from the country altogether. The special prosecutor for crimes in Darfur, appointed by the Sudanese government, who visited Tabit on Nov. 20, also concluded that no crimes had been committed.

The details of the Human Rights Watch report are damning. Throughout the town, the report says, the pattern of the attacks was similar: armed and uniformed Sudanese military personnel went house to house, beating the men, and then raping women and girls, sometimes mothers with daughters and sisters with sisters. Survivors, including these two below, shared their stories with Human Rights Watch: 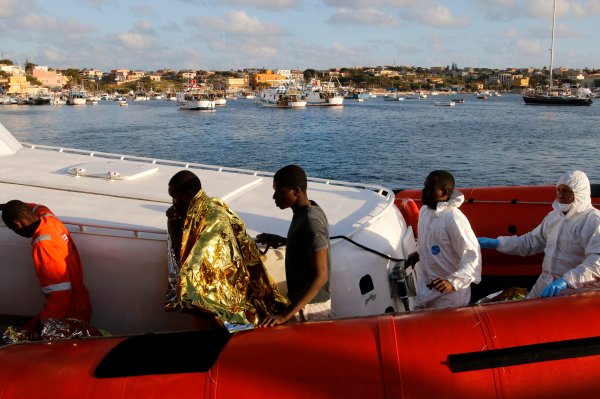 300 Migrants Feared Dead in Mediterranean
Next Up: Editor's Pick