You Asked: Is Perfume Bad for Me?

For some it’s intoxicating. It may also be toxic.

From sneezing and wheezing to rash and headache, many people suffer an allergic reaction to perfume—even when it’s on someone else. “Anything that gives perfume an odor is very likely going to be an allergen,” says Dr. Heather Patisaul, a biologist at North Carolina State University who studies the way environmental exposures mess with human development. That means your cologne- or perfume-soaked colleague could be the cause of your runny nose.

“Look at your perfume bottle and read the ingredients,” she suggests. “It reads like a chemistry book.” You can get lost among all the benzyls and ethyls. But it’s the ingredient listed simply as “fragrance” or “parfum” that worries public health researchers like Patisaul. “Those terms are a catchall for 10,000 different ingredients,” she says.

Thanks to trade-secret laws protecting perfume and cosmetic makers from divulging the specific formulas for their scents, Patisaul says there’s usually no way to know exactly which of those 10,000 ingredients you’re dabbing onto your neck or wrist. But a good bet is that any scented cosmetic—from perfume and cologne to body lotion and deodorant—will contain a group of petroleum-based chemicals called phthalates.

So what’s the problem? Some phthalates—namely one called diethyl phthalate (DEP)—are shown to disrupt our hormones, including testosterone. That’s a big concern for pregnant women, Patisaul says. “There’s evidence connecting phthalates to developmental disorders, especially among newborn boys,” she explains.

More research has linked DEP to poor lung function and myriad sperm issues, from lower counts to reduced motility, Cox says. Which means men—particularly adolescents who fumigate their still-developing bodies with aerosolized body sprays—could be at risk. “I mean, you’re purposely spraying these chemicals close to your body and rubbing them right on your skin,” Cox says. “There’s no question people are exposed.”

In women, research has linked phthalate exposure to problems such as polycystic ovarian syndrome, a cluster of symptoms that can include trouble conceiving, irregular periods, and hormonal imbalances that can lead to irregular hair growth and acne. Fetal exposure is better understood, and has some experts concerned.

What isn’t clear: Just how much phthalate exposure is too much. “It’s not like we can deliberately expose a bunch of pregnant women or boys to phthalates and see what happens,” Patisaul says. “So coming up with hard proof is difficult.” That same dilemma helped cigarette companies dodge health regulators for decades. And it’s bad news for American perfume and cosmetic users. “Our regulatory system assumes a chemical is safe until proven harmful,” Patisaul says. “In a lot of other countries, it works the opposite way. The burden is on the chemical producer.”

As a result, some perfume ingredients banned in Europe are still available in the U.S., Patisaul says. (France, the ne plus ultra of perfume-loving nations, is also one of the most strictly regulated when it comes to cosmetic components.) The list of banned ingredients includes natural animal musks and plant extracts that, for some, are potent allergens.

Read more: This Makeup Additive Is Linked To A Lower IQ

To protect yourself (and your coworkers), you could swap all your fragranced products in favor of unscented cosmetics, Patisaul says. Cox says you can check the safety of some ingredients and products that contain them using resources like Skin Deep, a product safety database run by the non-profit Environmental Working Group.

Pregnant women in particular should consider this sort of medicine-cabinet purge.

If you can’t bear to part with your favorite perfume, at the very least go easy when you apply it. And ditching scented lotions, deodorants, shampoos and aftershaves will still lower your exposure, Patisaul says. “You could argue endlessly about what is or isn’t a safe threshold,” she says. “The truth is, we’re only beginning to understand how these chemicals disrupt the body.”

Spritz at your own risk. 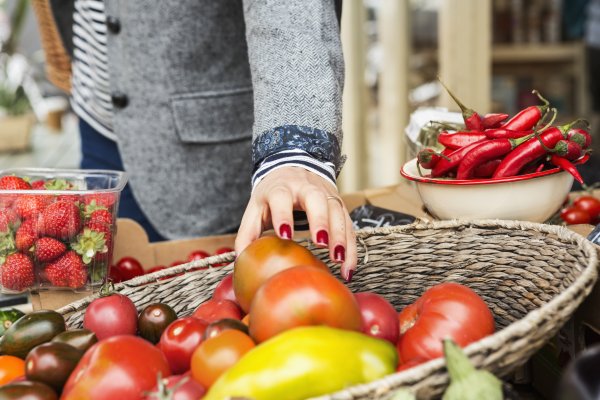