Fifty Shades of Grey Star Jamie Dornan: 'I Don't Have a Lot of Body Confidence'

Before he was the star of the much-anticipated Fifty Shades of Grey, Jamie Dornan was the creepy criminal in the British crime thriller, The Fall. Before that, he was a model — specifically, an underwear model.

But that doesn’t mean the young Irishman has truckloads of swagger when it comes to showing skin. “I don’t have a lot of body confidence,” says Dornan during an interview for TIME’s feature on Fifty Shades of Grey. “I would have the same hang-ups that most people would about their body. Maybe considering you’ll probably find pictures of my body quite easily online, that sounds weird, but those pictures wouldn’t be enjoyed by me, certainly.”

The semi-naked brooding modeling stints weren’t a complete loss, though — they came in handy for his role as hunky-but-damaged millionaire Christian Grey in the new film. “The positive thing to come out of the fact that I’ve had my picture taken a lot is you do attain a level of comfort in front of the camera, I guess,” he says. “There’s obviously a difference between a still camera and a motion camera, but there’s still a black thing with a lens on top of it. When you break it down, the fundamentals of it are pretty similar. So if you’ve been in front of that a lot, it can aid you as an actor.”

Dornan does show a lot less flesh than Dakota Johnson in the movie; reportedly, when the cast reassembled in Vancouver to shoot some additional footage, part of the reason was to show slightly more of Dornan’s physique. If that’s true, Dornan says, it’s news to him. “No one told me that. I don’t remember [what we shot]; it’s all [a] blur.”

And for a guy who’s tackled a number of erotically charged projects, Dornan actually comes off as pretty bashful. When he first saw the movie, he actually found his performance hard to watch, as many actors do. “I felt it was a great film — Sam [Taylor-Johnson, the director] had done a great job and Dakota was great in it,” he says. “But I’m certainly not in a position myself to say if I was any good.” 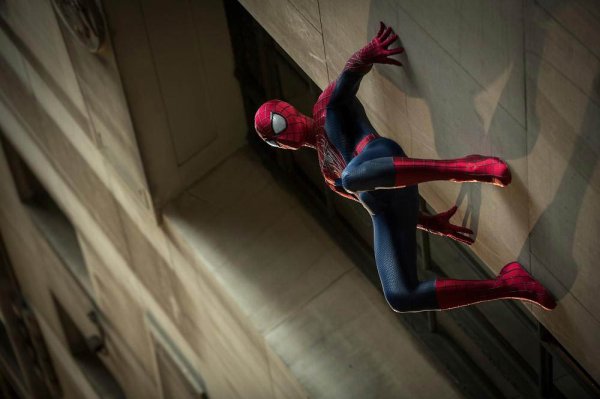 Everything You Need to Know About Marvel and Sony Teaming Up For Yet Another Spider-Man Movie
Next Up: Editor's Pick