Assad Says He Receives Messages from US-Led Coalition Against ISIS

Syrian President Bashar al-Assad speaks during an interview with AFP at the presidential palace in Damascus on January 20, 2014.
Joseph Eid—AFP/Getty Images
By Dan Kedmey

Syrian President Bashar al-Assad said his government received “messages” from the coalition forces about the air strikes against Islamic State in Iraq and Syria (ISIS) in an interview with the BBC.

“Sometimes, they convey a message, a general message, but there’s nothing tactical,” Assad said in a Tuesday interview. “There is no dialogue. There’s, let’s say, information, but not dialogue.”

President Barack Obama has refused any suggestions of dialogue with the Syrian leader, as government troops wage a campaign against opposition forces which has resulted in more than 200,000 deaths, many of them civilians.

Assad denied evidence from human rights groups that the Syrian army had dropped barrel bombs in populated areas. “I haven’t heard of the army using barrels, or maybe, cooking pots,” he said. 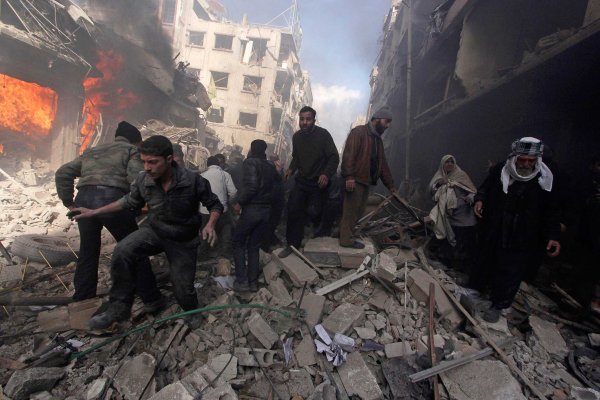 Syrians Dig Out After Deadly Attack on Rebel Stronghold
Next Up: Editor's Pick