A little fat may not be harmful, while too much of it can be unhealthy, and even fatal. But in the latest review of studies that investigated the link between dietary fat and causes of death, researchers say the guidelines got it all wrong. In fact, recommendations to reduce the amount of fat we eat every day should never have been made.

Reporting in the journal OpenHeart, Zoe Harcombe, a researcher and Ph.D. candidate at University of the West of Scotland, and her colleagues say that the data decisionmakers had in 1977, when the first U.S. guidelines on dietary fat were made, did not provide any support for the idea that eating less fat would translate to fewer cases of heart disease, or that it would save lives.

“The bottom line is that there wasn’t evidence for those guidelines to be introduced,” she says. “One of the most important things that should have underpinned the guidelines is sound nutritional knowledge, and that was distinctly lacking.”

When the recommendations were made, in the 1970s, heart disease claimed more U.S. lives than any other cause of death (and has retained that distinction for most of the ensuing years), so public-health and government officials were eager to get on the low-fat bandwagon. National guidelines, endorsed by health experts and expected to be followed by physicians in doctors’ offices around the country, sent word to the American public — trim fat to about 30% of your total daily calories, and cut saturated fat, from red meat and dairy products like milk, egg and cheese, in particular down to no more than 10% of total calories.

The problem, as Harcombe notes in her study, is that advice was “arbitrary. The 30% wasn’t tested, let alone proven,” she says. In fact, some data even contradicted the idea that the fat we took in from food had anything at all to do with the artery-clogging plaques that caused heart disease. In one study, men who were fed copious amounts of high-fat foods (butter, eggs, portions of cream and the like) did not show higher levels of blood cholesterol, suggesting that the fat from food had little to do with the cholesterol circulating in the body and produced by the liver. In fact, says Judith Wylie-Rosett, a professor of epidemiology and population health at Albert Einstein College of Medicine and a spokesperson for the American Heart Association (AHA), roughly a third of the cholesterol from food becomes part of the circulating cholesterol that can potentially build up in heart vessels — “not a major driver,” she says.

That’s why the AHA, among other groups, has gradually revised its guidelines and moved away from the strict guidance to lower fat intake. Instead, they focus on the types of fats in our foods, and on the diet as a whole. For example, Harcombe argues that the focus on fat, and on cholesterol and saturated fat in particular, has had a boomerang effect on the health of Americans. When we cut the fat, we replaced it with carbohydrates, which are broken down by the body into sugars and into a different form of fat, triglycerides, which may actually do more harm to the heart than cholesterol from animal products like red meat and dairy.

MORE Ending the War on Fat

So the AHA, while still urging people to be aware of how much saturated fat they eat, are not as focused on limiting total fat intake. “The message is still to use lean meats and fish, but the emphasis is not so much on total fat,” says Wylie-Rosett.

Harcombe would argue that even that doesn’t go far enough, according to her results. In her analysis of six trials in which people were randomly assigned to eat higher or lower amounts of dietary fat, she found no difference in heart attacks and mortality rates among the two groups. “What we are saying is that dietary interventions did not provide the evidence that dietary fat is associated with heart disease outcomes,” she says.

MORE Dietary Guidelines Are Not So Sustainable, Study Says

Does that mean a diet of daily steak and eggs won’t harm the heart? Harcombe admits that she also doesn’t have evidence for that position, but says that her findings do expose the shortcomings of current recommendations and the need for more rigorous studies. Given the current state of knowledge, she says “We are not doing our best by the consumer at the moment.” Wylie-Rosett agrees. “We don’t need to restrict fat to below 30% of daily calories, but do we want to allow up to 70%? We don’t know.”

Harcombe’s own solution to the confusion is to stick with the basics. “It’s one message, in three words — eat real food,” she says. The less adulterated and processed your diet is, the more nutrients and healthy fats, proteins and carbohydrates your body will get, and the less you’ll have to worry about meeting specific guidelines or advice that may or may not be based on a solid body of evidence.

MORE Uh Oh, Unsaturated Fats May Not Be as ‘Good’ as We Thought

Read next: Should I Eat Red Meat? 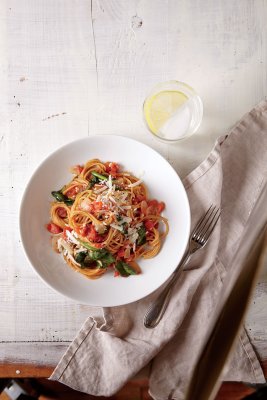 5 FLOTUS Family Dinners for Under $12
Next Up: Editor's Pick