Susan Patton, better known as the “Princeton Mom” for her unpopular opinions on marriage and date rape, has outraged many. But now she has been publicly challenged by a few of her own—namely 123 of her fellow Princeton alumni.

Members of Princeton’s class of 1978, who graduated a year after Patton, have written a collective letter published in Monday’s edition of the Daily Princetonian in which they criticize Patton’s ideas and her use of the Princeton name—and its colors—as a brand for those ideas.

“The wider world continues to see this woman dressed in orange and black associating her out-of-touch personal beliefs with our alma mater. We—along with many other alumni—see these views as outrageous and unworthy of being associated with Princeton,” the letter says. “We ask the Princeton administration to continue its efforts to create a campus climate where all accusations of sexual assault are treated with the seriousness they deserve, and we invite those who share our views to raise their voices to join ours.”

MORE Princeton Mom is on the Prowl, and 6 Other Things We Learned About Susan Patton

Earlier this winter, CNN televised a controversial interview with Patton in which she criticized the broad definition of rape in today’s society. “It no longer is when a woman is violated at the point of a gun or a knife,” she said in the interview.

Patton argued that instances that are now called rape are actually “learning experiences.”

“We’re now talking about or identifying as rape what really is a clumsy hookup melodrama or a fumbled attempt at a kiss or a caress,” she said.

Members of Princeton’s class of 1978 quickly shared her interview with each other, beginning with a single post on the Princeton University Class of 1978 Facebook page. Julie List, one of the five main authors of the letter, posted the interview on January 30 and within minutes other alumni began to share their outrage.

“There’s something especially irritating about her co-opting of the Princeton brand,” Amelia Silver, another co-writer, said in a Facebook comment.

By the end of the day, the idea of writing a collective letter was widely agreed upon and the process began.

The five writers feel that Patton, who labeled herself “The Princeton Mom” on the cover of her 2013 book Marry Smart, has unfairly damaged the Princeton name—one they share in common with her—but they do not intend for the letter to be a direct criticism of Patton.

“We never mention her name in the letter,” List said. “It’s not a personal attack. It’s an attack on the views that are damaging and that she’s appropriated the Princeton name.”

Many of the alumni signatories have had college-aged children, just like Patton.

“We graduated 35 years ago. Many of us have raised children—I have two children that have gone to college. We have seen these issues affect their lives,” Silver, the Facebook commenter and co-author said. “We have some perspective from our own experiences as undergraduates and then we have the added perspectives of our children’s’ experiences.”

Because of that common experience, the group set out to challenge Patton’s representation of Princeton and notions regarding sexual assault, with alumnus David Abromowitz taking a lead role.

“I think what happens in the absence of anybody challenging the notion that those views are widely held by Princeton moms, dads, aunts and uncles, [is that] the one view out there that the public sees related to Princeton comes to symbolize what people think a lot of people believe,” said Abromowitz. “We challenge that commonly held view, especially being of the same age and era out of Princeton.”

Though much of the letter deals with Patton’s alleged misrepresentation of Princeton, it also attempts to bring the issue of campus sexual assault to national attention.

“To fail to challenge such views damages decades of efforts to help women come forward after being sexually assaulted. It suggests to college women — indeed to all women — that it is really their fault that they were raped,” the alums letters says.

Ann Daniels, a co-author, said that she hopes the letter will create more discussion about college campus sexual assaults and rapes.

Most of all, Princeton Class of 1978 is attempting to set the record straight—this “Princeton Mom” represents no one but herself.

“We believe we speak for the great majority of Princeton moms and dads, as well as alumni who do not have children, in saying rape in general—and date rape in particular—is inexcusable,” the letter says.

Read next: Watch Beyoncé Explain the Hidden Meaning of Her Grammys Performance 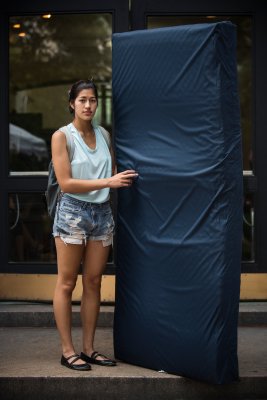 Columbia University Activist Emma Sulkowicz Is Going to the State of the Union
Next Up: Editor's Pick