John Oliver was not on vacation during his hiatus — he was taking a little break similar to the one NBC anchor Brian Williams is on right now. His crime? Misreporting hamster genitalia. Of course, that wasn’t the only thing on his mind. The Argentinian President’s racist tweet, the sad demise of RadioShack and the U.S. Congressman who decorated his office like Downton Abbey were all on Oliver’s agenda.

His real ire and mockery were reserved for the prescription-drug industry. Americans spent close to $330 billion on prescription drugs last year, which Oliver points out means that Breaking Bad’s Walter White could have made a lot more money if he was cooking up rheumatoid-arthritis drugs instead of meth.

According to Oliver, the culprit behind America’s prescription-drug problem is not doctors per se, but pharmaceutical companies pushing their products in semicompelling advertising that ends with three little words: “Ask your doctor.”

Oliver says Big Pharma wants you to talk to your doctor, because they have spent billions of dollars marketing their drugs to physicians. Oliver’s research revealed that pharmaceutical companies spent $24 billion marketing directly to doctors last year. According to one study quoted by Oliver, 9 out of 10 top drugmakers spent more on marketing drugs than researching the drugs. In Oliver’s words, “Drug companies are like high school boyfriends: they are more interested in getting inside you than in being effective once they are there.”

He then described some of the tactics used by pharmaceutical reps — the usually comely on-the-ground soldiers who peddle the drugs to doctors. Perks to doctors include actual free lunches, large speaking fees and much more. The result? According to Oliver, massive settlements from the pharmaceutical companies for overstepping laws.

Oliver suggests prescribing Big Pharma a healthy dose of transparency in the form of a “pharmaceutical money” advertisement showing the effects of their drugs and their perks on doctors. 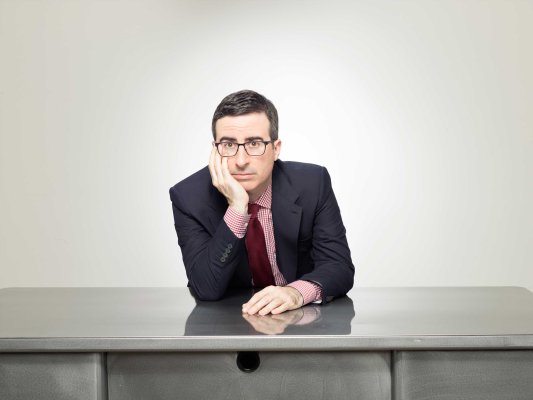 Dear John Oliver: Here's What You Should Tackle Next
Next Up: Editor's Pick