This Could Be the End of User Name and Password

The move could spell the beginning of the end for a decade-long debate among state and federal regulators over whether to require companies to go beyond the simple user name and password identity checks required to access many computer networks at the heart of America’s financial system and could affect everyone from employees at those firms to the consumers they serve.

Early investigations in the Anthem case suggest foreign hackers used the user name and password of a company executive to get inside Anthem’s system and make off with personal data for 80 million people, including names, addresses and Social Security numbers, the law enforcement officials tell TIME. Anthem had invested in extensive cyber defenses in recent years, but the officials say initial investigations suggest the theft could have been averted if the company had embraced tougher methods for verifying the identity of those trying to access its systems.

That shortcoming reflects systemic weaknesses found throughout the industry in an upcoming study by the New York State Department of Financial Services, a version of which was reviewed by TIME. Among the most worrying findings was a marked level of over-confidence among insurance industry officials regarding the security of their systems. “Anthem is a wake-up call to the insurance sector really showing that there is a huge potential vulnerability here,” says Benjamin Lawsky, the department’s superintendent.

While many big health, life and property insurers boast robust cyber-defenses, including encryption for data transfers, firewalls, and anti-virus software, many still rely on relatively weak verification methods for employees and consumers, and have lax controls over third-party vendors that have access to their systems and the personal data contained there, according to the report. The study follows a similar review by Lawsky’s office of the banking sector late last year that led to tighter cyber-examinations for banks doing business in New York.

As the fourth-largest state and the home to many of the corporations in question, New York could affect consumers in other states with its decisions.

For more than a decade, federal and state regulators have debated measures to require increased security at banks and insurance companies that handle the financial and personal details of hundreds of millions of Americans. In 2005, the federal body charged with setting the examination standards for federal regulators concluded [pdf] that simple user name and password systems were “inadequate” for “transactions involving access to customer information or the movement of funds to other parties,” but stopped short of requiring tighter measures. Updated guidance in 2011 [pdf] also stopped short of requiring them.

MORE Apple Might Make Computers You Control With Hand Gestures

The primary federal regulator of big banks, the Office of the Comptroller of the Currency (OCC) says different banks need to assess their own risks in determining whether to use additional verification methods. Other regulators have worried that if one agency, like the New York State Department of Financial Services, tightens standards on its own, the result will be a patchwork of rules that make life difficult for banks doing business across the country.

Still, most agree that username and password security alone is increasingly vulnerable to hackers. As American Banker reports:

The additional measures New York State is likely to require are known as “multi-factor authentication” and include a range of approaches to verify the identity of those trying to sign on to a computer system. Options include sending a confirmation number to an individual’s cell phone, using a fingerprint or other biometric authentication, or using a separate identification source, like a swipe card.

Lawsky has not decided whether his new rule would require institutions to use multi-factor authentication only for employees and third-party vendors, or whether consumers would be required to use them too. However, requiring major banks and insurers under his purview—such as Barclays, Goldman Sachs, Anthem and others—to adopt multi-factor authentication could change the industry standard.

Lawsky says he is eager to see that change. “The password system should have been buried a long time ago, and its high time we buried it,” Lawsky tells TIME. “We really need everyone to go to a system of multi-factor verification. It is just too easy, whether through basic hacking or through phishing or stealing basic information, for hackers to get a password and a user name and then to get into a system,” he says.

MORE Why Your Passwords Are Easy To Hack

State and federal officials have argued that banking and insurance cyber vulnerabilities pose a threat not just to the accounts of individual consumers, but potentially to the stability of the entire financial system. The Obama administration’s recently released National Security Strategy says, “the danger of disruptive and even destructive cyber-attack is growing,” thanks to “malicious government, criminal, and individual actors,” targeting the networked infrastructure on which economy, safety, and health rely.

The New York State Department of Financial Services study of the insurance industry shows most are largely convinced they are confronting and defeating hackers. 58% claimed they had experienced no security breaches during the three years preceding the 2013-14 study, while 35% said they had only between one and five such incidents.

In addition to the new rules on identity verification, Lawsky expects to impose new requirements on third-party vendors that have access to insurance company databases. Those vendors often have lower cyber-security standards and are not required to describe those standards to the companies even though they often have full access to personal data held by the company.

Read next: The 7 Biggest Lies You’ve Been Told About Hacking 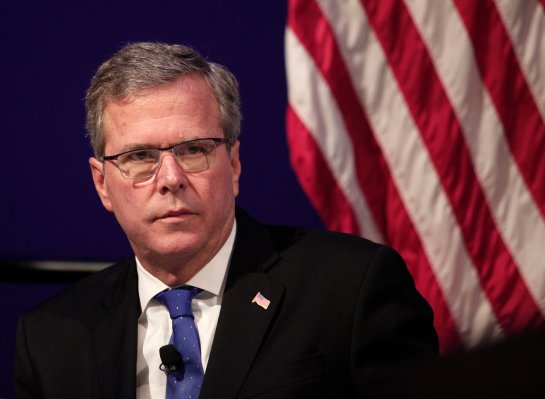 Jeb Bush Takes the Lead in New Hampshire
Next Up: Editor's Pick