Every College Coach Should Aspire to Be Like Dean Smith

Too often, the cult of the college coach is way too uncomfortable. These men are campus emperors, sometimes the highest-paid public employees in their entire state. They are lavished with millions, all because their unpaid workforce can make clutch jumpers or bone-crushing tackles. On the back of teenaged athletic success, they are held up as unquestioned leaders of young men, worthy of boardroom worship. Coach can teach your company a thing or two about management, so write him a lecture circuit check.

Winning breeds a fog where all flaws are forgiven. Smart, driven, charismatic coaches deserve our respect, but not outright adulation. We make simply make too much of college coaches.

Smith, the legendary University of North Carolina basketball coach who died on Feb. 7, at 83, wasn’t perfect. But he never carried himself like he was. Raised in Emporia, Kansas by Baptist schoolteachers, Smith didn’t have a slick bone in his body. “We’d all joke around and say, If I had the kind of juice Coach Smith did, I’d use it a lot differently,” says former North Carolina player King Rice, who played for Smith from 1987-1991. “I wouldn’t be that humble.”

Unfailingly polite, with a gift for remembering the names of everyone in his universe–the managers and support staff as well as the Michael Jordans and James Worthys—Smith was beset by no scandal. He never threw a chair, or cheated. His players graduated.

The main criticism against Smith was that the “Carolina Way,” which required shared sacrifice, stifled the individual brilliance of his players. Only Dean Smith, goes the joke, held Michael Jordan to under 20 points per game. But Carolina had the last laugh, because the Tar Heels were prodigious winners. In 1997, Smith retired with 879 wins, the most in Division 1 men’s basketball history at the time. He made 11 Final Four appearances, and won two national championships.

His players could have compiled more impressive individual statistics at other schools. But college is supposed to prepare you for the real world. No players were more prepped for the NBA than Smith’s. “He taught you everything — shooting, passing, positional defense,” says former North Carolina star Mike O’Koren, who spent eight seasons in the NBA from 1980-1988. “He never limited what he would teach you because of your size or anything.” O’Koren remembers getting the ball on a fast break during his freshman season, and hitting an open jump shot. A few possessions later, he took a similar shot — and missed with the defense in his face. The horn blared, and O’Koren was out of the game. “I don’t know about that shot Mike,” Smith said to O’Koren, now an assistant at Rutgers. “Coach, I was feeling it,” O’Koren replied. Smith: “Well, why don’t you go feel the bench now.”

Rice, now the head basketball coach at Monmouth University, remembers Smith telling his players they should never cut in line in the cafeteria, just because they were big shots on campus. “He never let our heads get too big,” Rice says. “He constantly reminded us that there were people doing a lot more impressive and important things than playing basketball.” Rice says he had struggles with drinking and his temper while on campus, but that Smith refused to give up on him when he easily could have, given all the other talent on the team. “He would always give me advice, and say, “King, this isn’t what’s best for Carolina basketball,” Rice says. “This is what’s best for you. Not every coach does that. It was like all of us were his sons.”

“He loved his players, he really, really did,” says O’Koren.”And we loved him.” 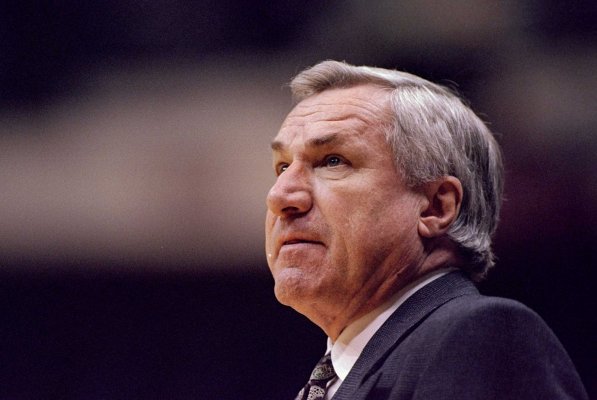 Dean Smith Dead at 83
Next Up: Editor's Pick